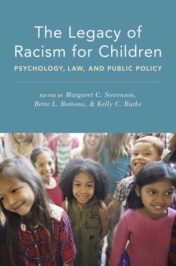 The Legacy of Racism for Children

On 29 January 2021, Rochester police responded to an incident involving a Black nine-year-old girl, who they were told might be suicidal. An extended police body camera video of the incident shows the agitated child, her mother, and an officer attempting to de-escalate the situation. The police detain the child by restraining her in handcuffs and placing her in the backseat of the police vehicle. Several of the nine officers who responded to the scene repeatedly threatened the child with pepper spray while detaining her. The child is shown begging the officers not to pepper spray her, crying hysterically, and repeatedly calling for her father. At one point, an officer says, “stop acting like a child,” to which she responds, “I am a child.” After the child is handcuffed and seated in the backseat of the police car, one of the police officers pepper sprays her and shuts the car door as the young girl screams inside.

As outrageous as this event was, it comports with existing psychological research conducted showing that people perceive Black children (but not White children) to be, on average, about 4.5 years older than they really are. In turn, people deny Black children traits and attributes uniquely reserved for children—namely, childhood innocence—and, in turn, treat them more severely than White children, as if they were adults. Instead of attributing childhood innocence to the behavior of Black children, police instead dehumanize Black children (implicitly associating them with apes), and the more police officers dehumanize Black children, the more frequently they use physical force against Black (but not White) children. The results of this research were so clearly demonstrated in real time by the Rochester police, who claimed to perceive an already detained and handcuffed Black, nine-year-old child to be a physical threat, in turn pepper-spraying her.

Although it is developmentally and psychologically normative for a nine-year-old to be fearful, cry, call for her father, and protest when multiple armed police officers attempt to detain her, the police in this instance instead blamed the nine-year-old for the event, attributing their use of force to her lack of cooperation. Indeed, at one point as the child begs to the officers, “Please don’t do this to me,” an officer is captured on camera telling the child, “You did it to yourself, hon.” The officers’ behavior reflects a grave lack of knowledge regarding the unique developmental and psychological behavior of children, generally. Importantly, substantial evidence reveals that Black and White children do not differ in basic psychological, emotional, and cognitive development. For instance, research shows that across all racial groups, children and adolescents (relative to adults) are disproportionately impulsive, sensation-seeking oriented, susceptible to peer influence, and prefer risk-taking with short-term over long-term potential rewards. Relatedly, Black and White youth do not differ in the extent to which they engage in various risk-taking criminal behaviors, like drunk driving and drug abuse.

Despite the absence of racial differences in basic psychological development, juvenile and criminal court decision makers consistently treat Black youth more harshly than White youth. For instance, even though self-report data reveal that White youth report more drug abuse than Black youth, Black youth are significantly more likely to be arrested for drug abuse. Moreover, even after holding constant factors like offense seriousness, Black youth (relative to White youth) are disproportionately detained, arrested, sentenced severely, transferred to adult criminal court, and treated punitively within probation. The disproportionately punitive treatment of Black relative to White youth offenders can be explained by negative racial stereotypes about recidivism potential, maturity, and culpability of Black youth, as well as dehumanization and the denial of childhood innocence of Black youth.

Notably, the Rochester police were not responding to a call involving criminal offending. Instead, they were responding to a call involving a mental health crisis—specifically, a suicidal nine-year-old child. Yet, substantial research suggests that otherwise ambiguous and developmentally normative child behavior (i.e., “loitering” or “disrespect”) is misinterpreted as “dangerous” and more frequently treated punitively with discipline when the child is Black than White. The negative downstream consequences for racial minority youth are myriad. For instance, being stereotyped by police officers causes anxiety among Black youth—anxiety that has the potential to prevent them from calling police in an emergency situation. Importantly, racial minorities who experience police brutality directly or vicariously (witnessing the abuse of others) are disproportionately likely to experience negative mental health consequences including anger, fear, and post-traumatic stress disorder. The implications of this research for the nine-year-old in Rochester are grim. To the extent that police use-of-force on an otherwise mentally healthy adult triggers mental illness, the negative mental health consequences of police-use-of-force on a suicidal nine-year-old child are likely even more serious.

As harmful as this experience of individual racism likely was for this nine-year-old, it is important to consider the impact of systemic and institutionalized racism affecting racial minority children within the justice systems. Negative experiences like these, which are disproportionately experienced by Black youth, set the stage for cascading and cumulatively negative future outcomes, occurring at each decision-point within the justice system (i.e., arrest, detainment, bail, verdicts, sentencing, probation, etc.). Understanding early experiences of racial minority youth is critical for understanding the scope of the disproportionately negative outcomes experienced by racial minority adults within the justice systems. Psychological scientists ought to continue conducting research to expose the unjust and damaging experiences of racial minority children within the legal system. Importantly, their work should not end in the lab. Instead, psychologists ought to use this research to advocate for law and policy change to end the disproportionately harmful impact of racism on the lives of children.

Keaton Carr recently received a bachelor’s degree from the University of Evansville, where he studied Cognitive Science and Psychology.

Malia Metelues is an undergraduate at the University of Evansville studying psychology, sociology, and criminal justice.

Kirsten Spears is a recent graduate of the University of Evansville, receiving a bachelor's degree in Psychology and Sociology

Margaret C. Stevenson is an associate professor at Kenyon College. She has published over 30 peer-reviewed articles, chapters, and two Oxford University Press edited volumes related to jury decision-making and the intersection of children, psychology, race, and the law.

Breathing life into statistics: stories of racism within the criminal justice system