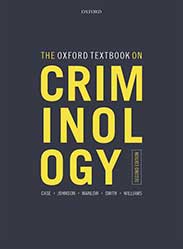 The Oxford Textbook on Criminology

You don’t need to look far to see how recent events have put the issue of racial inequality in the criminal justice system front and centre. The Black Lives Matter movement has brought the issue of institutional racism to the forefront of the public’s consciousness, kickstarting conversations and spurring communities into action to confront this inequality head on. This shift must be reflected in educational resources, and many textbooks in the field of criminology will be updated with statistics, news clippings, and quotes from prominent figures charged with reform in this area.

Yet the increased focus on and discussions surrounding racial inequality since the murder of George Floyd on 25 May 2020 have shown that it is human stories that have the greatest impact.

The Oxford Textbook on Criminology includes hard-hitting statistics, news extracts, and the latest scholarship, but it also goes further. Through the inclusion of numerous “Conversations” boxes, the book incorporates the voices and experiences of people we all need to hear from, breathing life into statistics and theoretical academic discussions.

This blog post takes extracts from just three conversations on the topics of racism and justice.

“My first gang was my family. This gang met all my key needs so this should have been a space where I could feel safe and flourish. However, family support couldn’t make up for the fact that I felt failed by the system and excluded by society.

“I joined a ‘real’ gang at the age of 14 for my own safety and in order to feel more significant. Yes, it was partly to boost my fragile and immature masculine ego, but this only needed boosting because I felt excluded and purposeless.

“One memory that will always stay with me is when I was stopped and searched on Edgware Road, a stone’s throw away from my house. I offered no resistance but still the officers felt the need to put my face against the cold, wet slab of concrete, multiple knees pressing into my body. This was simply because I fitted the description of someone they were looking for, and it happened in front of my mum—I’d gone to help her carry her shopping.

“This is only one example, and I’ve experienced many similarly unjust events, but I have never forgotten the humiliation of it and the anger I felt towards those white police officers. The situation deepened my hate for the police force and anything that had to do with the law because yet again, I was the victim of police autocratic behaviour and received no apology. It was just a ‘routine check’, in the words of the officer.

“We must remember that everyone is a human. Gang members are just people looking for a sense of belonging in a society which constantly excludes them. If we strive for humanity then instead of creating division and amplifying a way of life that is particularly damaging for young people, we will be able to offer support and guidance to those who need it most.”

Extract from Conversations 9.1 with Omar Sharif, former gang member and now coach, mentor, and speaker, and winner of a Prince’s Trust Award.

The police force or the police service?

“On another occasion I was on my way to work and was singled out on a busy train platform. I was told that I was being searched for drugs. Whilst I was being searched, the officers allowed their sniffer dog to place its paws all over my suit. Imagine having to explain to your work colleagues why you were late and why you were covered in paw prints . . . It appears that that neither the innocence of a school uniform nor the professionalism of a suit is enough to protect you from police racial profiling.

“Statistics continue to show the presence of racial profiling, which is problematic when the police are the main gateway into the criminal justice system. These kinds of policing practices explain to some degree the reason we see a disproportionate number of ethnic minorities within the Criminal Justice System.

“In my most recent encounter with the police they searched me at gunpoint [because] they said that they had reason to believe that I had a firearm in my possession. In my bag, instead of finding a firearm, they found law books.

“It appears that that neither the innocence of a school uniform nor the professionalism of a suit is enough to protect you from police racial profiling.”

“It felt like the officers had decided that I was a problem and were trying to create a narrative to fit. I’d done nothing wrong, I’d cooperated, and yet they tried their best to put me in a situation that could have devastated my career. Thankfully, they didn’t succeed and I’m a barrister now.”

Extract from Conversations 10.2 with Leon-Nathan Lynch, a barrister at 25 Bedford Row, London.

“I joined the CPS [Crown Prosecution Service] as an administrative officer in 1988, soon after it came into existence in 1985. The 1990s was a challenging time for race relations in the UK. It felt like there was little social or criminal justice for Black African Caribbean or Asian communities.

“My personal experiences working for the CPS at that time were not particularly positive. During that period, I experienced a lot of negative behaviours from managers and colleagues, which I was unable to articulate as ‘racism’ at the time; it was just ‘the way things were’. As a Black woman and primary caregiver I was excluded in more ways than one.

“The Equality Act came into law in 2000, and in light of the new statutory obligations and the issues raised previously, the CPS invited Sylvia Denman QC OBE to investigate race equality in the service. Her report found that the CPS was institutionally racist and that this had wide ranging impacts on both the treatment of staff and the approach to criminal casework.

“To the CPS’s credit, senior leaders responded swiftly and in less than three years went beyond the recommendations of the report. For example, the Denman review brought to light the mistreatment of Black, Asian, and minority ethnic staff across the service. The senior team at the time said they weren’t aware this was happening so the report recommended that the CPS establish a network for these staff to give them direct access to key decision makers. In 2001, the National Black Crown Prosecution Association (NBCPA), the first CPS staff network, was born.

“In 2020, the NBCPA is now one of eight CPS staff networks—covering a broad span of interests including race, religion, disability, and most recently social mobility. . . we not only look to promote equality and diversity within the CPS but also more broadly in the criminal justice system. We act as a critical friend to the CPS. We work closely with the HR team to develop programmes and training events to support the progression and development of Black, Asian, and minority ethnic staff and to educate all CPS staff about the realities of structural racism and intersectionality in the UK today.”

So how can we work towards a truly “just” justice system? Theory, statistics, and academic debates can help us understand the issues and develop potential solutions, but the events of summer 2020 showed that it is lived experiences that engage, mobilise, and ultimately spark change.