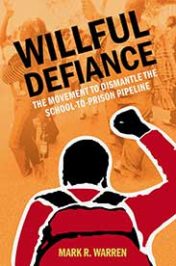 Willful Defiance: The Movement to Dismantle the School-to-Prison Pipeline

On 25 October 2015, a Black high school student named Niya Kenny filmed a white school police officer body slamming her classmate, a Black sixteen-year-old girl, to the floor at Spring Valley High School in Columbia, South Carolina. Deputy Sherriff Ben Fields placed Shakara in a headlock, flipped her desk over, and then dragged and threw her across the classroom floor, all for allegedly refusing to hand over her cell phone. Yet it was Niya and her classmate who were arrested, charged with criminal “disturbing school,” and sent to juvenile detention.

Niya’s video went viral. Students across the country involved in the Alliance for Educational Justice and local groups working to dismantle the school-to-prison pipeline wrote and delivered love letters to Niya at a national youth power conference. The movement delivered a petition with 150,000 signatures to drop the charges against Niya and Shakara, and the incident served to accelerate the growing, but at the time little known, movement for police-free schools.

Riding the wave of mass protests against police violence and racism in 2020, Black and Brown parents and students won their first victories in defunding or removing police from schools. Since even before the Niya Kenny incidents, these local activists had been patiently organizing for police-free schools for many years. They had built a base of student and parent leaders knowledgeable about the issue, had developed and even submitted policy proposals, and had been lobbying school board members. When the protest wave opened up new opportunities, these organizing groups were ready. They won some quick and early victories and sparked a movement that spread across the country.

Long-established organizing campaigns won quick victories in 2020, cutting the school police budget by 35% or $25 million in Los Angeles in 2020 (and by another $25 million in 2021), ended the contracts between the Madison and Denver school districts and their police departments, and entirely eliminated the Oakland Schools Police Department, reinvesting its $6 million budget into a non-carceral safety plan. Since June 2020, over 138 school districts have announced that they will remove police from schools.

Police do not make students safe

Police-free school advocates spent years developing the argument that school police, also known as school resource officers (SROs), do not make schools safe. There is, in fact, no research-based evidence that demonstrates that police improve safety in schools.

“There is, in fact, no research-based evidence that demonstrates that police improve safety in schools.”

As opposed to promoting safety, school police target students of color and those with disabilities, which starts them on the road to prison. During the 2017-18 school year, nearly 230,000 students were referred to law enforcement, with about a quarter leading to arrests, often for minor behavioral issues. In schools with police presence, students are five times more likely to be arrested and charged than students in schools without SROs. Overall, Black students are twice as likely to be arrested in school as white students. Many young people have their first encounter with police in schools. One study found that in North Carolina, school-based referrals make up about 40% of the referrals to the juvenile justice system and most of these referrals are for minor, nonvio­lent offenses.

The rise of armed security personnel in schools came with zero tolerance approaches to the so-called war on drugs in the 1980s and escalated in the 1990s as part of the move towards mass incarceration of Black and Brown people, which Michelle Alexander has called the “New Jim Crow.” In the late 1970s, there were fewer than one hundred police officers in schools in the US. By 2003, there were almost 15,000 and the proportion of schools with armed security continued to grow.

Alternatives to zero tolerance and policing

Advocates working to end zero tolerance and create police-free schools are organizing for alternative approaches to criminalization like restorative justice. When students misbehave or fight, rather than being disciplined or arrested, school staff and student peers hold restorative circles—dialogic processes that get at the root causes of the issue and help resolve conflicts. The main problem, however, may not be student misbehavior. Rather, when teachers start to learn about restorative justice, it often leads them to realize that they must break with zero tolerance mentalities and practices that result in punishing and criminalizing students rather than supporting them. In this way, the movement for police-free schools seeks to create supportive school climates and to reimage public schooling as safe, humane, and empowering for low-income students, students of color, and all students.

“The movement for police-free schools seeks to … reimage public schooling as safe, humane, and empowering for low-income students, students of color, and all students.”

The movement to dismantle the school-to-prison pipeline

In the early 2000s, a new movement arose to challenge the school-to-prison pipeline. Its focus was primarily on ending zero tolerance school discipline policies that suspend and expel students of color and those with disabilities at high rates, pushing them out of school and into the juvenile and criminal justice systems. Black students were and still are three times as likely to be suspended as white students; in Texas, over 75% of Black students are suspended at some point in their high school years.

When parents and students of color first named the school-to-prison pipeline and called for an end to zero tolerance, few were listening. After fifteen years of organizing, in 2014, the US Departments of Education and Justice issued joint guidance calling for an end to zero tolerance and warning school districts against racially discriminatory discipline practices. Organizing groups won a rolling series of victories in states and districts across the country that ended zero tolerance discipline policies. As a result, suspension rates have begun to fall, in some places dramatically. In Los Angeles, a coalition of organizing groups won a series of victories in campaigns to reduce exclusionary discipline, culminating in the end to suspensions for “willful defiance” in 2011. Lost days of instruction due to suspensions fell from about 75,000 in 2007-18 to 8,300 by 2013-14 and fewer than 5,600 lost days in 2017-18.

Ten years ago, the Black Organizing Project in Oakland declared the goal of completely removing police from schools by 2020. Few were listening. Now, the demand for police-free schools is gaining momentum across the country. It is the new frontier of the movement to dismantle the school-to-prison pipeline and transform public education towards racial equity and educational justice.

Featured image by NeONBRAND via Unsplash.

Mark R. Warren is Professor of Public Policy and Public Affairs at the University of Massachusetts Boston and the author of Willful Defiance: The Movement to Dismantle the School-to-Prison Pipeline (Oxford University Press, 2022). A sociologist and community engaged scholar, he has published widely on community organizing efforts for racial equity and educational justice, including Lift Us Up! Don’t Push Us Out! Voices from the Frontlines of the Educational Justice Movement (Beacon Press, 2018) and A Match on Dry Grass: Community Organizing as a Catalyst for School Reform (Oxford University Press, 2011).

Breathing life into statistics: stories of racism within the criminal justice system