Film is a powerful tool for teaching international criminal law and increasing public awareness and sensitivity about the underlying crimes. Roberta Seret, President and Founder of the NGO at the United Nations, International Cinema Education, has identified four films relevant to the broader purposes and values of international criminal justice and over the coming weeks she will write a short piece explaining the connections as part of a mini-series. This is the first one. 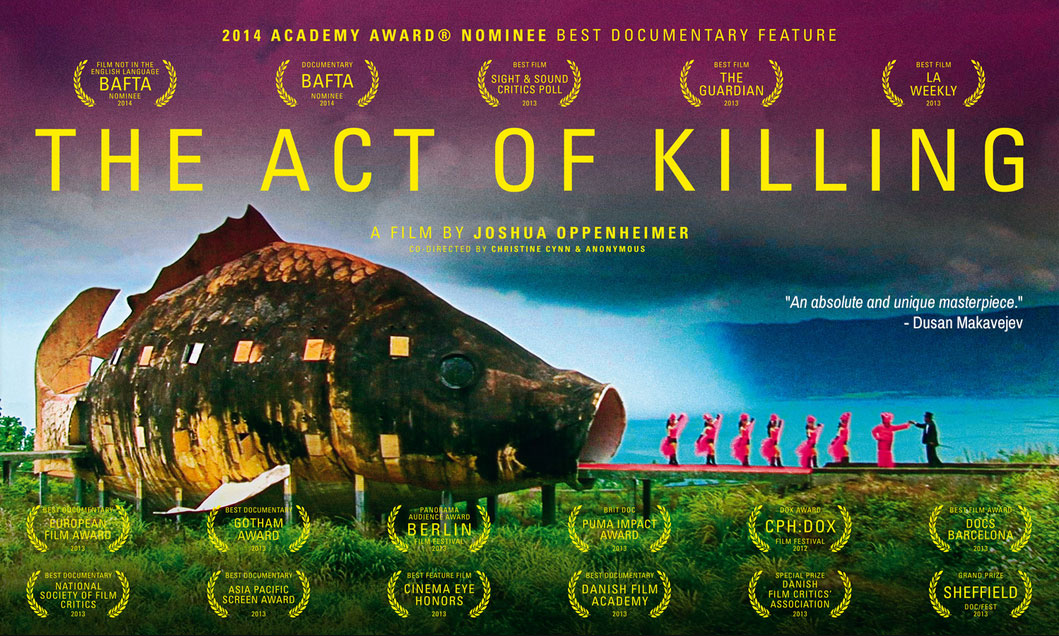 American director, Joshua Oppenheimer, has merged theatre, psychology, and film in his innovative documentary, The Act of Killing, Jagal in Indonesian, meaning Butcher. (BAFTA Award for Best Documentary of 2013.)

We are taken to Indonesia 1965 when more than 500,000 citizens and thousands of Chinese residents were massacred because they were communists or communist sympathizers or born Chinese.

By 1965, there were 3 million communists in Indonesia and they had the strongest communist party outside the Soviet Union and China. During this time, the political and economic situation throughout the Archipelago was unstable with an annual inflation of 600% and impoverished living conditions. General Soeharto overthrew Soekarno, took control of the army and government, and led a ruthless anti-communist purge.

For eight years (2003-2011), director Joshua Oppenheimer, lived in Indonesia, learned the language, and set himself to expose in cinema this untold genocide.

The Act of Killing recreates scenes of mass execution in Indonesia from 1965-66. The main actor, Anwar Congo, and his auxiliary protagonist, Adi Zulkadry, are perpetrators from the past who re-enact their crimes. In reality, during 1965, they were both gangsters who were promoted from selling black market movies to leading death squads in North Sumatra. Anwar, before the camera, boasts that he killed approximately 1,000 people by strangling them with wire. “Less blood that way. Less smell,” he reminisces with a smile.

The initial question for the director is what structure to choose for his documentary? How to recreate this history 47 years later on the screen to viewers who will learn about these horrors for the first time?

Oppenheimer has been influenced by Luigi Pirandello’s structure as found in the play, Six Characters in Search of an Author (1921). Pirandello’s theatre of a play within a play merges drama and psychology (psychodrama/ group therapy). And Oppenheimer, a true master, takes this form to cinema. He becomes the leader, director of the action, and asks questions to his actors so they can re-enact the history. In turn, the actors use props and improvisation to respond. Scenes unfold in unpredictable ways and the actors, without realizing it, are taken back to the past. This structure of psychodrama is the director’s secret vehicle to open up the subconscious of his characters and free their suppressed memory.

For Oppenheimer, as for Pirandello almost 100 years before, it is Art that becomes a conduit for Truth. It is Art that reveals the Reality between the Self and the outside world. Oppenheimer has achieved this on a stage while filming his actors. He uses Pirandello’s role playing and re-experiencing to expose the truth to the actors and to the world about Indonesia’s horrific genocide and impunity for such crimes.

After Anwar and his co-actors voyage deep into their past, we see them as they see themselves – criminals with blood on their hands, monsters overwhelmed with fear that the ghosts of the past will curse them.

At the end of the journey, Anwar becomes victim. The act of filming the act of killing has made him realize the 1,000 deaths he had committed. The line between acting and reality becomes blurred and there is only one Truth that emerges.

Anwar’s last scene is his response to this intense journey. He gives us a guilt-ridden soliloquy reminiscent of Shakespeare and a scene of vomiting where he tries to purge himself of his victims’ blood. Oppenheimer does not rush this scene. He lets the power of film take over as the camera documents for history the criminal’s realization that he is a Butcher of Humanity.