Film is a powerful tool for teaching international criminal law and increasing public awareness and sensitivity about the underlying crimes. Roberta Seret, President and Founder of the NGO at the United Nations, International Cinema Education, has identified four films relevant to the broader purposes and values of international criminal justice and over the coming weeks she will write a short piece explaining the connections as part of a mini-series. This is the second one, following The Act of Killing. 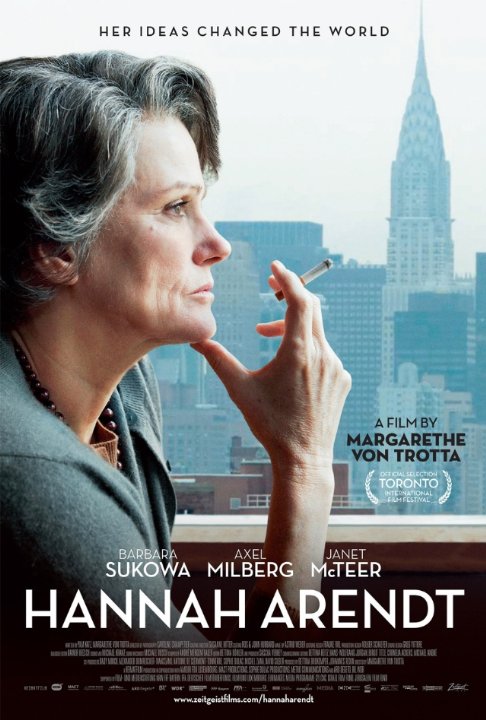 The powerful biographical film, Hannah Arendt, focuses on Arendt’s historical coverage of Adolf Eichmann’s trial in 1961 and the genocide of six million Jews. But sharing center stage is Arendt’s philosophical concept: what is thinking?

German director, Margarethe von Trotta, begins her riveting film with a short silent scene — Mossad’s abduction of Adolf Eichmann in Buenos Aires, the ex-Nazi chief of the Gestapo section for Jewish Affairs. Eichmann was in charge of deportation of Jews from all European countries to concentration camps.

Margarethe von Trotta’s and Pam Katz’s brilliant screen script is written in a literary style that covers a four-year “slice of life” in Hannah Arendt’s world. The director invites us into this stage by introducing us to Arendt (played by award-winning actress Barbara Sukova), her friends, her husband, colleagues, and students.

As we listen to their conversations, we realize that we will bear witness not only to Eichmann’s trial, but to Hannah Arendt’s controversial words and thoughts. We get multiple points of view about the international polemic she has caused in her coverage of Eichmann. And we are asked to judge as she formulates her political and philosophical theories.

Director von Trotta continues her literary approach to cinema by using flashbacks that take us to the beginning of Arendt’s university days in Marburg, Germany. She is a Philosophy major, studying with Professor Martin Heidegger. He is the famous Father of Existentialism. Hannah Arendt becomes his ardent student and lover. In the first flashback, we see a young Arendt, at first shy and then assertive, as she approaches the famous philosopher. “Please, teach me to think.” He answers, “Thinking is a lonely business.” His smile asks her if she is strong enough for such a journey.

“Learn not what to think, but how to think,” wrote Plato, and Arendt learns quickly. “Thinking is a conversation between me and myself,” she espouses.

Arendt learned to be an Existentialist. She proposed herself to become Heidegger’s private student just as she solicited herself to cover the Eichmann trial for The New Yorker. Every flashback in the film is weaved into a precise place, as if the director is Ariadne and at the center of the web is Heidegger and Arendt. From flashback to flashback, we witness the exertion Heidegger has on his student. As a father figure, Heidegger forms her; he teaches her the passion of thinking, a journey that lasts her entire life.

Throughout the film, in the trial room, in the pressroom, in Arendt’s Riverside Drive apartment, we see her thinking and smoking. The director has taken the intangible process of thinking and made it tangible. The cigarette becomes the reed for Arendt’s thoughts. After several scenes, we the spectator, begin to think with the protagonist and we want to follow her thought process despite the smoke screen.

When Arendt studies Eichmann in his glass cell in the courtroom, she studies him obsessively as if she were a scientist staring through a microscope at a lethal cancer cell on a glass slide. She is struck by what she sees in front of her – an ordinary man who is not intelligent, who cannot think for himself. He is merely the instrument of a horrific society. She must have been thinking of what Heidegger taught her – we create ourselves. We define ourselves by our actions. Eichmann’s actions as Nazi chief created him; his actions created crimes against humanity.

The director shows us many sides of Arendt’s character: curious, courageous, brilliant, seductive, and wary, but above all, she is a Philosopher. Eichmann’s trial became inspiration for her philosophical legacy, the Banality of Evil: All men have within them the power to be evil. Man’s absence of common sense, his absence of thinking, can result in barbarous acts. She concludes at the end of the film in a form of summation speech, “This inability to think created the possibility for many ordinary men to commit evil deeds on a gigantic scale, the like of which had never been seen before.”

And Eichmann, his summation defense? It is presented to us by Willem Sassen, Dutch Fascist and former member of the SS, who had a second career in Argentina as a journalist. In 1956 he asked Eichmann if he was sorry for what he had done as part of the Nazis’ Final Solution.

Eichmann responded, “Yes, I am sorry for one thing, and that is I was not hard enough, that I did not fight those damned interventionists enough, and now you see the result: the creation of the state of Israel and the re-emergence of the Jewish people there.”

The horrific acts of the Nazis speak for themselves. Director von Trotta in this masterpiece film has stimulated us to think again about genocide and crimes against humanity, their place in history as well as in today’s world.