Film is a powerful tool for teaching international criminal law and increasing public awareness and sensitivity about the underlying crimes. Roberta Seret, President and Founder of the NGO at the United Nations, International Cinema Education, has identified four films relevant to the broader purposes and values of international criminal justice and over the coming weeks she will write a short piece explaining the connections as part of a mini-series. This is the third one, following The Act of Killing and Hannah Arendt. 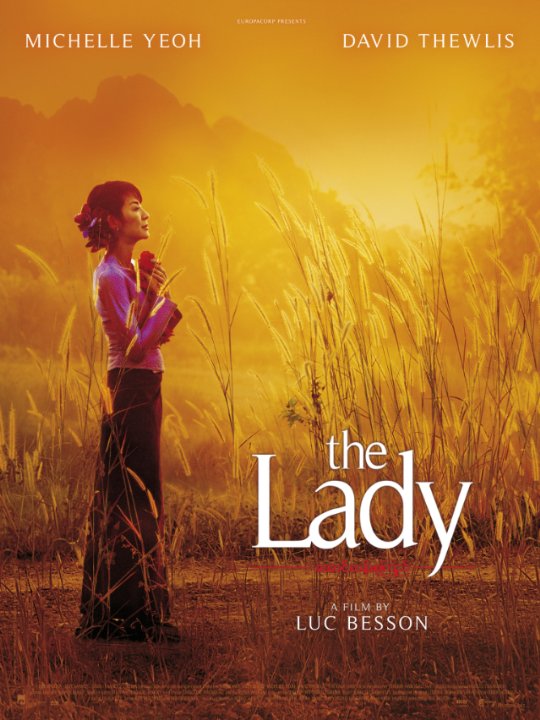 When Luc Besson finished filming The Lady in 2010, Aung San Suu Kyi had just been released from being under house arrest since 1989. He visited her at her home in Yagoon with a DVD of his film as a gift. She smiled and thanked him, responding, “I have shown courage in my life, but I do not have enough courage to watch a film about myself.”

The recurring tenet of the inspiring biographical film, The Lady, is exactly that: one woman’s courage against a military dictatorial regime. Each scene reinforces her relentless fight to overcome the inequities of totalitarianism.

Aung San Suu Kyi was born the third child of General Aung San, leader of Burma during World War ll and Father of Independence from British rule. He was assassinated in 1947 before he saw his country’s sovereignty in 1948. His daughter has dedicated her life to continue his legacy – to bring democracy to the Burmese people.

The film, The Lady, begins in Oxford 1988 where she is a housewife and mother of two sons. After setting the stage of happy domesticity, she receives a phone call from her mother’s caretaker in Burma that the older woman is dying. And so begins the action.

After 41 years, Suu Kyi returns home to a different world than she remembers. The country’s name is changed from Burma to Myanmar, Ragoon has become Yagoon, and a new capital, Naypidaw, has been carved out of a jungle. Students are demonstrating and being killed in the streets of Yagoon while General Ne Winn rules with an iron fist. Suu Kyi is soon asked by a group of professors and students to form a new party, the National League for Democracy. She campaigns to become their leader.

French director, Luc Besson, was not allowed to film in Myanmar. Instead, he chose Thailand at the Golden Triangle, where Myanmar, Laos, and Thailand merge in a beautiful mountainous landscape. Most of his interior scenes, however, take place at the Lady’s house on Inya Lake in Yagoon, which Luc Besson recreated with help from Google Earth and computers. The Chinese actress, Michelle Yeoh, plays Suu Kyi, with perfectly nuanced facial and body expressions that are balanced with a subtle combination of emotion and control. But the Burmese, who were initially not allowed by the government to see the film, resented a Chinese actress portraying their icon. Even the police chased Ms. Yeoh from Myanmar when she tried to pay her respects to the Lady.

The film adheres closely to history and biography, which are inherently compelling. The director did not need to borrow from fiction to enhance his portrait of a brave, self-sacrificing woman. Luc Besson is a master filmmaker, and we see in the characters of his strong women, like Nikita (1990) and The Lady, the power of will and determination that go beyond limits to become personality cults.

The film depicts how Suu Kyi wins 59% of the votes in the general election of 1990, but instead of leading Parliament as Prime Minister, she has already been forced and silenced under house arrest by the Military where she stays for more than 15 years and three times in prison until 2010.

The Lady is a heart-breaking story of a woman’s personal sacrifice to free her people from the Military’s crimes against humanity. In 2012, once free and allowed to campaign, she won 43 seats in Parliament for her party, but this is only 7% of seats. She will campaign again in 2015 despite the Military’s opposition and a Constitution that has already been amended to block her from winning.

In Luc Besson’s film, we see a beautiful woman of courage and heart, a personage deserving the adulation of her people. “She is our hope,” they all agree. “Hope for Freedom.”