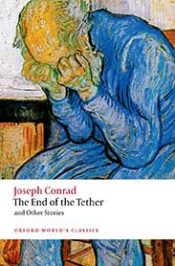 The End of the Tether, and Other Stories

My generation in my part of the Western world seemed to have got away with it: for decades it was mainly peace, relative prosperity, good general health. The last few years, I need hardly say, have done away with these often-unearned securities of which we had unthinkingly thought ourselves assured. It has been like losing a layer of mental skin, though already it is growing back. We run for cover to the false security of words—the secondary language of explanation and exhortation—when we don’t really know what is going on or how we are doing.

Increasingly I’ve lost faith in public words, public discourse, especially in relation to those personal and private matters described as mental health issues. All I have any trust in now are attempts at human specifics, however flawed and partial: examples that somehow ring an inner bell, ahead of knowing what exactly they are examples of. Reading literature is a good model for this way of thinking. One of Dickens’s struggling young men, David Copperfield, says of his experience that he does not know how far it is particular to him, and how far general to other people too. This messy in-between area is the only holding-ground I know.

From within that area I am going to describe some case-histories arising out of work done by the Centre for Research into Reading, Literature and Society (CRILS) at the University of Liverpool, to which I have belonged.

Josh is aged 26 and taking a Masters degree in engineering. Autistic and of mixed race, all his life, he told our researcher at interview, he has felt that his parents have pressured him to try to fit in, to integrate socially, by teaching him how to behave normally, like a “neurotypical.” That was his second-hand, pre-prepared script for life. But, as part of a study, he volunteered to read a chapter from Dickens’s Great Expectations where the boy Pip on his first visit to the house of Miss Havisham feels overwhelmed, lower-class, a clumsy misfit. This is a quite different script:

I was so humiliated, hurt, spurned, offended, angry, sorry —I cannot hit upon the right name for the smart — God knows what its name was—that tears started to my eyes.

People with autism are told that they do not understand feelings. Josh himself speaks of being unable to “attach” to an experience the name of one distinct emotion. He has not got the skill to be automatically normal. But neither has the boy Pip, and I have seen the manuscript of Great Expectations where Dickens worked hard to accumulate that set of struggling words. Josh felt like Pip—in many situations still, he said, even those he was meant to be used to; never feeling secure or at home. All he could do in place of not having a single grounding term of explanation, he now realized, was to imagine a person and a situation through literature, and memory re-activated by reading.

Nobody seems to have told anyone that what Josh could do here on the inside of experience was finer—more emotionally intelligent, linguistically more subtle—than the routine skill of single-word definition that he was supposed to aspire to. Neuro-bloody-typical, I’d say, of our educational system throughout: no admission that so-called inabilities and insecurities can go much deeper than the easy norms.

Literature has us think differently, with a subtler emotional lexicon. Here, from another CRILS research study, is a mixed community group in a local London library reading Charlotte Brontë’s Jane Eyre aloud together. “Get out of the room; return to the nursery” says the unkind aunt to the orphaned child, on the brink of sending her away to boarding school. “I got up, I went to the door,” Jane recalls, and then, “I came back again.” Instead of going on seamlessly as normal, she will not cross the threshold into her new future before coming back again to do justice to her past:

Speak I must … ‘I will say the very thought of you makes me sick, and that you treated me with miserable cruelty.’

‘How dare you affirm that, Jane Eyre?’

‘How dare I, Mrs. Reed? How dare I? Because it is the truth. You think I have no feelings, and that I can do without one bit of love or kindness; but I cannot live so.’

Jack, a 50-year-old born in the West Indies, says a moment after:

She was on her way out, then she thought, ‘No I’m going to tell, to come back and just tell her.’ I don’t think she thought through whatever she was gonna say but … she’d actually been hurt — it’s not physical but like it — certain things that they say, rock your inner core [puts fist onto chest] … but she said back what … what was in her mind, and the words kept flowing.

Then, through all of an immigrant’s experience, he adds: ‘I don’t see her as a 10-year-old girl.’ The almost physical identification across race, class, age, culture, and history, is a surprise—more powerful than something more determinedly relevant.

“Speak I must” (not simply, “I must speak”) were the words that stuck with another group-member. Anne is a quiet middle-aged woman, saying some months after at an interview:

It wouldn’t have been so telling if she had not been able to point to those three particular words that helped get this out of her. Nor would it have been so powerful if she hadn’t had that stuttering difficulty in articulating “hurting me.” If these things seem smaller to you than the big themes, I don’t agree. “Nobody knows,” says Brontë in Jane Eyre, “how many rebellions besides political rebellions ferment in the masses of life which people earth.” A little bit better at being confident now is very careful.

I could go on with more such examples of humans achieving expressive dignity for themselves in the face of their vulnerability and insecurity. But suffice to say this: I feel as if for language I only want literature now, or whatever is more like literature. By that I mean not something fancy or arty; but whatever in the way of feeling, thought, and language helps people to speak more out of the less secure, less normalized parts of themselves. Or there is no health in us.

Philip Davis, Emeritus Professor of Literature and Psychology, University of Liverpool, formerly Director of Centre for Research into Reading, Literature and Society (CRILS).

Author with OUP of "The Victorians" (volume 8 of Oxford English Literary History), "Bernard Malamud: A Writer’s Life, Reading and the Reader" Literary Agenda series, "The Transferred Life of George Eliot", "Reading for Life", and most recently in 2022: "William James in My Reading" series and editor of "Joseph Conrad, The End of the Tether" (Oxford World’s Classics).