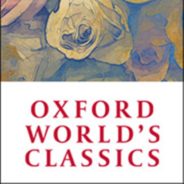 For over 100 years Oxford World’s Classics have brought readers closer to the world’s great literature, and for the first time they are being brought together on a single online resource.

From Louisa May Alcott, Laozi, Alexandre Dumas, to Jane Austen, which Oxford World's Classics will you read next?

Are you searching for inspiration to help further your goals this new year? Reading books offers an easy yet effective way to help navigate life, so who better to turn to than authors of some well-loved Oxford World’s Classics!

To help get you in the right mind space for the new year ahead, here are eight books we recommend to help inspire…

First published in 1872 during major technological innovations, Around the World in Eighty Days has been a best-seller for over a century for good reason. The adventure novel offers a post-romantic reality where its modernism lies not in science fiction, but instead, in the experimental technique and the author’s unique ability to twist time and space. The story focuses on Phileas Fogg of London and his valet Passepartout from France embarking on an 80-day journey to circumnavigate the known world on a wager of £20,000.

Read: Around the World in Eighty Days

Perhaps this is the year to embrace your inner swashbuckler—someone who goes on daring, romantic adventures with bravado—for whom The Three Musketeers will be just the right inspiration! Written in 1844, the historical adventure novel is set between 1625 and 1628 and recounts the quest of a young man named d’Artagnan who leaves his home in Paris in pursuit of joining the Musketeers of the Guard. Although d’Artagnan is unable to join the guard immediately, he befriends Athos, Porthos, and Amis—three of the most formidable musketeers.

With its origins rooted in 5th century BCE North India, Buddhism, also known as Buddha Dharma, is a philosophical tradition attributed to the teachings of Buddha. One of the main sources for knowledge from the Buddha is the four Pali Nikayas or “collections” of his sayings. The original Nikayas are written in Pali, an ancient Indian language. This edition is a reliable modern translation offering some of Buddha’s most important sayings and reflects the full variety of material contained in the Nikayas: the central themes of the Buddha’ teaching, including his biography, philosophical discourse, instruction on morality, meditation, and spiritual life, and a range of literary styles including myth, dialogue, narrative, short sayings, and verses.

Read: Sayings of the Buddha

Written around 400 BC, the Daodejing is a Chinese classic text that is traditionally credited to the semi-legendary and sage philosopher Laozi. This is the founding text of Daoism and is a fundamental Chinese text that combines philosophy and religion to promote harmony in life. The Daodejing enables the individual, and society as a whole, to find balance, to let go of useless grasping, and to live in harmony with the great unchanging laws that govern the universe and all its inhabitants.

Published in 1813, Pride and Prejudice is a novel of manners and one of the most famous love stories of all time. With the arrival of eligible bachelors in the neighbourhood, the lives of Mr and Mrs Bennet and their five daughters are turned inside out and upside down. As the title suggests, a mixture of pride and prejudice deters the two love interests from pursuing each other, and so, misconceptions and hasty judgements bring heartbreak and scandal. But where many conventional love stories go, as does Pride and Prejudice; true understanding, self-knowledge, and love eventually come about.

Written in an intimate first-person narrative, this Victorian love story centers on the titular character Jane Eyre. The story reveals the intricacies, importance, and impact of valuing the self, first and foremost. As the love story between Jane and Mr. Rochester unravels deceit, madness, and betrayal, it eventually leads to understanding, self-worth, and deep love. More than being a love story, however, Jane Eyre is an emotionally charged narrative of valuing dignity and freedom through one’s own terms.

Little Women is a coming-of-age novel that was originally published as two volumes; one in 1868 and the other in 1869. The story follows the lives of four sisters—Meg, Jo, Beth, and Amy—as they struggle to support their family’s meager income and actualize their individual dreams. Despite being poor and argumentative, the March sisters are loving and optimistic and are supportive of each other. The characters display high degrees of strong will and independence in their determination to control their own destiny.

Originally published in two parts, the first in 1605 and the second in 1615, Don Quixote de la Mancha was an instant and colossal success. As the years go by, the mythic status of this story strengthens. The story centers on Don Quixote, a poor gentleman from La Mancha, Spain, who seeks romantic honor through absurd adventures. Thanks to his imagination, everyday objects are turned into heroic opponents and serve as stepping stones to greater glory. Ultimately, Don Quixote is a master of being courageous in the face of adversity.