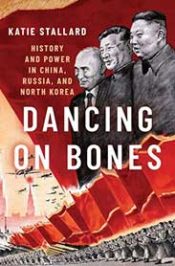 Discover all the OUP books from 2022 that topped critics' lists!

With the new year unfolding before us and resolutions for the days ahead being made, it’s a good time to reflect on the pivotal moments and people that captured the attention of many in the last year.

Here are six books from 2022 that reviewers and critics loved that you should add to your 2023 reading list:

1. Dancing on Bones: History and Power in China, Russia, and North Korea by Katie Stallard

Dancing on Bones is a deeply researched examination with first-hand reporting on the ground in North Korea, Russia, and China of how the leaders of these three countries manipulate the past to serve the present and secure the future of authoritarian rule. Stallard argues that if we want to understand where these three nuclear powers are heading, we must understand the stories they are telling their citizens about the past.

Dancing on Bones was included in the New Statesman list of Best Books of 2022, in the Financial Times Best Politics Books 2022, and The Sunday Times 15 Best Books on Political and Current Affairs 2022.

Order your copy of Dancing on Bones →

2. The Rise and Fall of the Neoliberal Order by Gary Gerstle

The Rise and Fall of the Neoliberal Order is a sweeping account of how neoliberalism came to dominate American politics for nearly a half century before crashing against the forces of Trumpism on the right and a new progressivism on the left. Gerstle argues that the condemnations neoliberalism has thus far received fail to reckon with the full contours of what neoliberalism was and why this worldview had such a persuasive hold on both the right and the left for three decades.

The Rise and Fall of the Neoliberal Order was shortlisted for the Financial Times as Best Business Books of the Year, and was included in the Financial Times Best Books of 2022, Prospect magazine’s books of the year, and in Le Grand Continent 15 Books to Read in April 2022. It also received coverage in The New York Times, The Washington Post, The New Republic, New York Review of Books, the New Statesman, Oprah Daily, Los Angeles Review of Books, Daily Kos, and The Nation.

3. La Nijinska: Choreographer of the Modern by Lynn Garafola

This is the first biography of twentieth-century ballet’s premier female choreographer, Bronislava Nijinska. Nijinska experienced the transformative power of the Russian Revolution and created her greatest work—Les Noces—under the influence of its avant-garde. Nijinska’s career sheds new light on the modern history of ballet and of modernism and reveals the sexism pervasive in the upper echelons of the early- and mid-twentieth-century ballet world—barriers that women choreographers still confront. La Nijinska was included in the New Yorker Best Books of 2022 So Far, in The Times 7 Best Film and Theatre Books 2022, and received coverage in The Telegraph, The Washington Post, The Nation, The New Yorker, The New York Times, and The Spectator.

Order your copy of La Nijinska →

4. Mussolini in Myth and Memory: The First Totalitarian Dictator by Paul Corner

Corner looks at the brutal reality of the Italian dictator’s fascist regime and confronts the nostalgia for dictatorial rule evident today in many European countries. By linking past history and present memory, Corner’s analysis constructs a picture of the realities of the Italian regime and examines the more general problem of why people look for strong leadership and take refuge in the memory of past dictatorships.

The Economist declared “seldom is the publication of a book more topical,” and The Financial Times observed the book is “timely, balanced, succinctly argued and thoroughly convincing.” Mussolini in Myth and Memory was also included in Financial Times Best History Books 2022 and in History Today Best Books of the Year 2022.

Order your copy of Mussolini in Myth and Memory →

5. Disorder: Hard Times in the 21st Century by Helen Thompson

Thompson explains the historical origins of the political shocks of the past decade, and why we live in the political times we do in Disorder. This book recounts three histories—one about geopolitics, one about the world economy and one about western democracies—and explains how in the years of political disorder prior to the pandemic the disruption in each became one big story.

Order your copy of Disorder →

6. The Letters of Oscar Hammerstein II by Mark Eden Horowitz

This epistolary book is a collection of letters from and to American musical theater’s greatest innovator, Oscar Hammerstein II. It provides an entertaining look behind the scenes of Broadway. Hammerstein II basically invented the modern American musical, first with Show Boat, and then in his celebrated collaborations with composer Richard Rodgers on Broadway classics like Oklahoma!, Carousel, and The King and I that continue to captivate audiences today.

The Letters of Oscar Hammerstein II was included in NPR Best Books 2022 and was recommended by Lin Manuel Miranda.

Order your copy of The Letters of Oscar Hammerstein II →

Funny how it ain’t so funny: casting, Funny Girl, and Broadway’s body issues