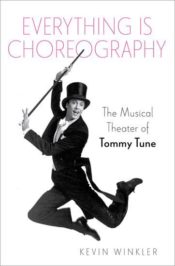 Everything is Choreography: The Musical Theater of Tommy Tune

From the beginning, Tommy Tune was pulled as if by centrifugal force toward dance and the Broadway musical. He was taking dancing lessons by the age of five, but his early ambition to be a ballet dancer was abandoned when he shot up in height during his teenage years. He later joked about his extreme height, saying, “Sometimes, instead of thinking of myself as six-foot-six, I tell myself I’m only five-foot-eighteen.”

Nevertheless, he made a smooth transition from staging backyard musicals in his native Texas to standing tall (literally) in Broadway chorus lines. His friend and early mentor, Michael Bennett, provided Tune with both his first opportunity to choreograph on Broadway and his breakthrough as a performer. When Bennett took over the direction of the struggling musical Seesaw, he recruited Tune to join the show’s choreographic team and promoted him to the role of a gay choreographer. Refreshingly, the character was not sad and lonely, nor a focus for easy laughs. It was one of musical theater’s first attempts to portray gays as more than stereotypes.

Tune’s showstopping number, “It’s Not Where You Start,” which he choreographed, served as a template for much of his later work. Throughout his career, he brought the Broadway musical forward by looking backward, drawing on well-worn show business performing styles and tropes and infusing them with contemporary energy and attitude. Here, in both his staging and performance, Tune blended the old and the new into something fresh and original.

Tune won the Tony Award for Best Featured Actor in a Musical for Seesaw, but his towering height made it difficult to translate this success into a sustained performing career on Broadway and he soon distinguished himself as an exciting new choreographer and director. The hits started adding up: The Club and Cloud 9 off-Broadway won him Obie Awards, A Day in Hollywood/A Night in the Ukraine and Nine brought him Tonys. In between, he gave Irish step dancing an athletic and homoerotic energy in The Best Little Whorehouse in Texas.

Despite his success as a director-choreographer, Tommy Tune still thought of himself as a performer first. For My One and Only, a reworking of the 1927 Gershwin musical Funny Face, he was happy to star with his friend Twiggy and co-choreograph with his frequent collaborator Thommie Walsh. But when the director was fired, Tune and Walsh were pressed into service as co-directors, meaning that Tune now wore three hats: as director, choreographer, and star actor. Tune turned My One and Only into a fleet, fast-moving entertainment built around a parade of prime Gershwin songs––an early example of the jukebox musical. Its bold staging used movement and lighting to drive the story forward against a series of bright geometric drops and flats that evoked the 1920s with stylish minimalism.

Tune took styles and motifs of the past and remade them as fresh, exciting new performances. In the show’s penultimate number, Tune evoked first generation film musicals with their frenetic dance ensembles and screwball performers, as in this number from 1929’s Show of Shows. Tune joyously updated this style of dance for “Kickin’ the Clouds Away.”

In an evening full of stellar dances, perhaps the high point was a second act duet between Tune and Charles “Honi” Coles. Coles, who turned 72 just before My One and Only opened, was known for his legendary partnership with Cholly Atkins in the 1940s and 50s. Theirs was a “class act,” in which they appeared in elegant attire, performing a relaxed, graceful tap style that incorporated glides and turns, all danced in mirror-like precision. Their most famous number was a slow, deliberate tap routine to “Taking a Chance on Love.”

When Tune and Coles dance to the show’s title song, it is a number steeped in the earlier Coles and Atkins style, exhibiting an extraordinary economy of movement and sound. Tune later reflected on Coles’s influence on his own dancing, saying, “Honi was always saying, ‘More nonchalant, Tommy, more nonchalant. Besides the sounds that you’re making, it’s the spaces that count.’ It’s the way great painters leave things out,” Tune noted.

After the long-running Grand Hotel, which won him more Tonys, Tune reconfirmed his status as the last of the superstar director-choreographers with his next musical, The Will Rogers Follies, the story of the beloved star of radio, vaudeville, and films, and one of the most popular headliners of the Ziegfeld Follies. For this look back at a bygone theatrical era, Tune’s staging drew upon a trove of forgotten show business antecedents, revisiting the showgirl lineups and dramatic tableaux of the Ziegfeld Follies with both authenticity and ironic detachment.

Busby Berkeley’s cowgirl chorus, with its “hat-ography,” in the 1930 film, Whoopee, was an inspiration for Tune. Tune took Berkeley’s idea and streamlined and refined it for The Will Rogers Follies’ opening number.

The showstopping “Favorite Son” celebrated Rogers’s bipartisan appeal and offered up his formula for a fresh approach to politics. It was a dazzling expansion of a precision number performed by the Russell Markert Dancers in the 1930 film, King of Jazz.

In Tune’s reincarnation, the pace is quickened to capture the rhythm of the lyrics. The routine, flawlessly performed, creates a delicious blur of whizzing colors and crisscrossing limbs. Without ever rising to its feet, “Favorite Son” became the dazzling dance highlight of The Will Rogers Follies.

In the 1980s, Tune created a concert act for himself, harvesting American songbook standards for a song and dance presentation that he sometimes referred to as “contemporary nostalgia.” “Old plus old equals new,” Tune said. But there was nothing gauzy or dated about the performance. Tune performed the material with fresh exuberance and delight, as if it had just been created.

The act proved remarkably flexible and durable, playing nightclubs and concert halls across the country and the world for more than thirty years. Tune’s enthusiasm for touring brought him a unique kind of celebrity. For many, he became the quintessential “Broadway Baby,” a man who summoned the spirit and continuity of the theater, even for those with little knowledge of the art form. Long after his contemporaries had stopped dancing, Tune continued to perform with precision and panache, as in this clip from the New York City Center Encores! 2015 production of Lady Be Good.

By the time Tune received a special Tony Award for Lifetime Achievement in 2015––his tenth, altogether––he had inspired a new generation of director-choreographers like Susan Stroman, Jerry Mitchell, and Casey Nicholaw. In musicals like The Producers, Kinky Boots, and The Book of Mormon, they absorbed Tune’s creative use of show business motifs and his ability to move forward by drawing on the past—“old plus old equals new”—and successfully adapted them to a new, faster-paced era.

Kevin Winkler enjoyed a career of more than twenty years as a curator, archivist, and library administrator at the New York Public Library, prior to which he was a professional dancer. His book, Big Deal: Bob Fosse and Dance in the American Musical (OUP, 2018), won the Theatre Library Association's George Freedley Memorial Award, Special Jury Prize, was a finalist for the Marfield Prize, and was cited as an ALA/ACRL CHOICE Outstanding Academic Title. He is an on-screen commentator in the acclaimed documentary, Merely Marvelous: The Dancing Genius of Gwen Verdon.