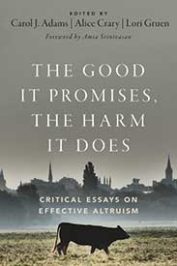 The Good It Promises, the Harm It Does

Over the past decade the philanthropic ideology of Effective Altruism (EA) has grown massively both in attracting funds and in influencing young people to try to make as much money as they can and give most of it away. EA offers adherents a philosophy of charitable giving that promises to do the “most good” per dollar donated or time spent. Until recently, EA’s role in directing charitable funds had functioned stealthily, barely scrutinized by most media outlets. But a series of catastrophic financial hustles in the world of cryptocurrency has brought EA heightened attention and started to expose its dangers.

During the summer of 2022, journalists fawned over William MacAskill, one of the co-founders of EA and its offshoot “longtermism,” speaking admirably about the way he was able to cultivate sympathy for EA among tech and crypto billionaires such as Dustin Moskovitz, Sam Bankman-Fried, and Jaan Tallin. This led to securing hundreds of millions of dollars for effective altruist causes with pledges of billions more to come.

On 11 November 2022, Bankman-Fried, founder and CEO of crypto-currency exchange FTX, filed for bankruptcy, amid suspicions of fraudulent conduct reaching back several years. As Bankman-Fried’s business practices came under scrutiny, so too did his association with EA. A billionaire by age 30, he had become the poster boy for EA’s “earn to give” project. Bankman-Fried was raised a utilitarian and when he was a student at MIT, MacAskill persuaded him he could do the most good by making as much money as possible and then donating that money in an “effective” way.

Until the day before the bankruptcy filing, MacAskill had been an advisor to FTX’s charitable foundation, which had given tens of millions to EA and longtermist projects.

By mid-November, with the collapse of FTX and potential criminal charges pending, discussions of EA could be found at the top of blogs, newspapers, and podcasts in the United Kingdom, United States, and, indeed, around the world. In many of these discussions, the FTX-EA relationship was framed as a problematic alliance that provided moral cover for FTX’s conduct in exchange for hefty funding for EA. The standard line was that this will be a disaster for EA, in terms of reputation as well as funding.

The criticism that problems are inevitable when EA adherents follow the simplistic utilitarian idea that the ends justify the means, is correct as far as it goes. But the criticism says nothing about how EA is, at best, an utterly inadequate way of addressing global problems and, at worst, designed for the very sort of morally corrupt scandal in which it is now entangled. In the new collection, The Good It Promises, The Harm It Does, activists and scholars address the deeper problems that EA poses to social justice efforts. Even when EA is pursued with what appears to be integrity, it damages social movements by asserting that it has top-down answers to complex, local problems, and promises to fund grass-roots organizations only if they can prove that they are effective on EA’s terms.

Effective Altruists, like utilitarians, are committed to impartiality (each person’s good is as important as everyone else’s), welfarism (promoting well-being is the only good to be achieved), and maximization (to bring about not just good ends, but the most good, all things considered). To step inside the utilitarian frame is to accept that values that count as “good” can be abstractly quantified. Its methods leave it incapable of addressing historically sedimented structural injustices and intergenerational injuries, since these aren’t the sorts of things that can be quantified by EA-style metrics.

“EA is doing harm, in an increasingly global manner, to the work of activists for liberating causes.”

Despite the liberating intentions of many of its advocates, EA is, irredeemably conservative.  It favors welfare-oriented interventions that increase countable measures of well-being and both neglects and diverts funds from social movements that address injustices and agitate for social change, particularly in marginalized communities both in the US and in the Global South.

To grasp how disastrously an apparently altruistic movement has run off course, consider that the value of organizations that provide healthy vegan food within their underserved communities are ignored as an area of funding because EA metrics can’t measure their “effectiveness.” Or how covering the costs of caring for survivors of industrial animal farming in sanctuaries is seen as a bad use of funds. Or how funding an “effective” organization’s expansion into another country encourages colonialist interventions that impose elite institutional structures and sideline community groups whose local histories and situated knowledges are invaluable guides to meaningful action.

Is it just that EA needs to avoid aligning itself with tech-bros and financial whiz-kids who may be playing fast and loose with other people’s savings, as the media narrative seems to suggest? No! EA is morally and politically wrongheaded, pernicious in its basic precepts, covering up systemic injustices embedded in the fabric of existing capitalist societies in a manner that clears the way for the perpetuation of significant wrongs. It is doing harm, in an increasingly global manner, to the work of activists for liberating causes. This point, which is barely present in the larger conversation that the implosion of FTX has triggered, is the core theme of The Good it Promises, The Harm It Does, a timely collection that deepens the criticisms of Effective Altruism beyond their sketchy financial associations.

Alice Crary is University Distinguished Professor in Philosophy at the New School for Social Research in New York.

Lori Gruen is William Griffin Professor of Philosophy at Wesleyan University where she founded and coordinates Wesleyan Animal Studies.

Carol J. Adams is a feminist scholar and activist whose work explores the cultural construction of overlapping and interconnected oppressions, as well as the ethics of care.