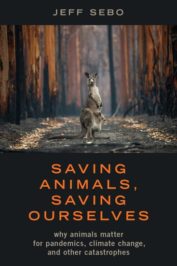 Saving Animals, Saving Ourselves: Why Animals Matter for Pandemics, Climate Change, and other Catastrophes

The health and environmental crises of the past two years have taught us that our lives are increasingly connected across nations and generations. Many of our current activities are not only harming vulnerable populations but also contributing to global health and environmental threats that harm us all. And when disruptions occur, they disproportionately impact the most vulnerable among us. Thus, many of us now appreciate, pursuing health and climate justice requires pursuing social and economic justice too. And in the same kind of way, I believe, pursuing justice for humans requires pursuing justice for animals too.

Of course, justice for animals is important for its own sake. Humans kill trillions of animals per year, often unnecessarily. For instance, we kill more than 100 billion farmed animals and an estimated 1-3 trillion wild animals for food each year, in spite of the fact that we increasingly have access to humane, healthful, sustainable plant-based foods. We also kill countless captive and wild animals every year for research, clothing, and entertainment, as well as through habitat destruction, “pest” control, and air, water, and noise pollution. We need to reduce these harms as much as we realistically can simply for the sake of our nonhuman victims.

But justice for animals is important for our sakes as well. Industries like factory farming, deforestation, and the wildlife trade not only kill trillions of animals per year but also increase the risk of global health and environmental threats like pandemics and climate change. For instance, since factory farming keeps animals in crowded, toxic conditions and administers high quantities of antimicrobials, it contributes to health threats like bacterial and viral outbreaks. And since it consumes so much land and water and produces so much methane and nitrous oxide, factory farming contributes to environmental threats like climate change too.

There are more basic links between human and nonhuman justice too. While human and nonhuman oppressions are different in many ways, they all stem in part from our basic tendency to construct in-groups and out-groups, and to then favor policies that benefit in-groups more than out-groups. Additionally, part of how humans oppress other humans is by comparing them with nonhumans who are presumed to be “lesser than” because of social, biological, physical, or cognitive differences. In these respects, too, efforts to end human and nonhuman oppressions are not only independently important but also mutually reinforcing.

What can we do to achieve justice for animals?

While many basic changes will be necessary to address these harms, we can make three general observations for now. First, we need to reduce our use of animals as part of our pandemic and climate change mitigation efforts. Reforming industries like factory farming, deforestation, and the wildlife trade is not enough to limit the damage to animals, global health, and the environment. We need to reduce our support for these industries and increase our support for alternatives as much as we can, for instance by divesting from factory farming and investing in plant farming, plant-based meat, and cultivated meat instead.

Second, we need to increase our support for animals as part of our pandemic and climate change adaptation efforts. Our current infrastructure is designed to accommodate some humans more than others and is also designed to accommodate humans more than nonhumans. As we work to build a more resilient and sustainable infrastructure, we need consider the interests and needs of humans and nonhumans alike. This will allow us to co-exist with other animals more successfully in the future, and it will also allow us to harm them less and help them more not only during normal times but also, and especially, during disruptions.

Third, we need to do this work holistically, structurally, and comprehensively. When we consider human and nonhuman needs holistically, we can find shared solutions to shared problems. When we consider our needs structurally, we can create social, political, economic, and ecological structures that make it easier for everyone to build resilience against the threats that we face. And when we consider our needs comprehensively, we can build resilience not only against, say, outbreaks and extreme weather events, but also against the ordinary threats like hunger, thirst, illness, injury, violence, and neglect that these disruptions can amplify.

When we consider how much progress we still need to make for humans, the idea of making progress for other animals too might seem premature. But it would be a mistake to wait until we achieve justice for humans to pursue justice for other animals. Both projects are important, and we can make progress on them more effectively and efficiently when we pursue them together. We should thus broaden the search for justice now by considering the interests and needs of everyone impacted by our activity and by seeking to build shared structures that can accommodate all of us, rather than only the privileged few.

Jeff Sebo is Clinical Associate Professor of Environmental Studies, Affiliated Professor of Bioethics, Medical Ethics, and Philosophy, and Director of the Animal Studies M.A. Program at New York University. He works primarily in bioethics, animal ethics, and environmental ethics. He is co-author of Chimpanzee Rights and Food, Animals, and the Environment. He is also an executive committee member at the NYU Center for Environmental and Animal Protection, an advisory board member at the Animals in Context series at NYU Press, a board member at Minding Animals International, a mentor at Sentient Media, and a senior research affiliate at the Legal Priorities Project.