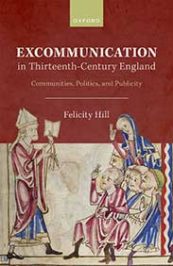 The Becket Leaves, a set of thirteenth-century drawings depicting the life of Thomas Becket, include an image of the archbishop pronouncing an excommunication. Becket himself is depicted in the act of throwing a candle to the ground. On the right of the picture, a group of men and women react to this fearsome spectacle. Some of these onlookers, notably the man in the green hat, appear to be cowering in fear. Yet others, at least to a modern eye, look as though they have only contempt for the archbishop and his sentence of excommunication. The image, albeit anachronistically interpreted, encapsulates the varying responses to excommunication in thirteenth-century England. Excommunication was the medieval church’s most severe sanction, but reactions varied from fearful to indifferent to defiant.

The censure implied an afterlife spent in hell: “as this candle is extinguished, thus let excommunicates’ souls be extinguished in hell.” It was not to be taken lightly. Indeed, evidence suggests that the spiritual power of excommunication was not rejected in principle in thirteenth-century England. Dying excommunicate was a terrifying prospect. Adam le Warner, for instance, sought absolution explicitly because he had fallen ill and was afraid to die without having obtained absolution. The problem, however, was that for most excommunicates, the risk of dying was not an immediate one: absolution could be put off. Before falling so suddenly and deathly ill, Adam had been defying the bishop of Lincoln; his attitude changed only when death loomed. Other excommunicates refused to seek absolution from those they believed to be acting unjustly. Llywelyn the Great of Wales eloquently explained his contempt for his own excommunication in 1234: “we prefer to be excommunicated by man, than to do anything against God, with our conscience condemning us.”

Individuals’ own responses to their sentences is only part of the story, however. The entire “communion of the faithful” was supposed to ostracise them. Yet an excommunicate’s associates could deem sentences unfair too. Llywelyn incurred his sentence because he continued to support his ally, Falkes de Bréauté (a rebel against the English king), whom he did not consider excommunicated “as far as God is concerned” (usque ad deum). How excommunications were received by the wider community has been understudied. In many more cases, communities who were supposed to enforce excommunications by avoiding those under the ban failed to do so. The many excommunicates who were able to live while under the church’s ban were only able to do so because their friends and neighbours were not ostracising them as canon law required. Ecclesiastical authority and judgements were often questioned.

The expectation of communal enforcement also meant that excommunication was necessarily a very public matter. Sentences had to be extensively publicised, generally in parish churches on Sundays and feast days. Widely disseminated sentences were an important means through which the laity was informed about local and political disputes. The sentences solemnly publicised also needed to convince people to shun excommunicates, so could be extremely vitriolic. For this reason, excommunicates worried about the defamatory aspects of being under the ban. On the other hand, the publicity attached to sentences also launched the sometimes-questionable behaviour of clerics into the public eye, to be discussed and condemned. This exposed not only individual clergymen to ridicule and derision, but potentially the church’s authority as a whole. The risk of scandal was particularly acute when clergy fought amongst themselves: as the bishop of Hereford observed in 1275, clergy who were mutually excommunicating each other throughout the city risked causing the laity to treat these excommunications no more seriously than they would a jester’s anathema.

Its public nature was thus simultaneously a considerable incentive to use excommunication, and its greatest liability. An especially venomous dispute between the archbishop of Canterbury and the monks of Christ Church in the 1230s, recorded in the monks’ own chronicle, demonstrates this. The monks themselves repeatedly appealed not against their excommunications, but to prevent denunciations, which they treated as a separate issue to excommunication itself. The archbishop’s fellow bishops, meanwhile, tried to dissuade him from publicising his sentence so extensively, seemingly worrying that it would bring the church into disrepute by airing its dirty laundry in public. The citizens of Canterbury, clerical and lay, continued to support the monks, flouting the archbishop’s commands. They were accordingly chastised, but the disputes effects were more widespread. Such a great scandal had been generated by the archbishop’s unreasonable public measures that merchants and pilgrims were avoiding the city entirely.

Excommunication remained a powerful, albeit it volatile, tool. It was certainly best to avoid being sentenced. Yet churchmen using excommunication had limited control over how their sentences played out. The populace could play ball, more or less willingly (those who communicated with excommunicates themselves faced censure, usually interdicts and minor excommunications) or they could render the sanction toothless by refusing to enforce it. Excommunication’s use risked turning the people against the church, potentially causing reactions like those seemingly depicted in the Becket Leaves. The study of excommunication provides a window into medieval attitudes, loyalties, and mass communication.