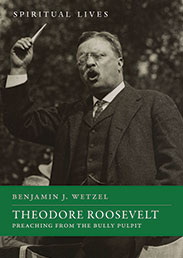 Theodore Roosevelt is everywhere. Most famously, his stone face stares out from South Dakota’s Mount Rushmore. In addition, an island, national park, and aircraft carrier bear his name; university institutes and scholarly associations honor his legacy; and (in mascot form) he even runs the perimeter of the Washington Nationals stadium during the fourth inning of the team’s baseball games.

Roosevelt’s ubiquity is not without reason. His achievements as a hunter, naturalist, historian, soldier, statesman, explorer—and self-promoter—are myriad. Yet scholars are still discovering new features of his important legacy, including his spiritual life and place on the American religious landscape during the Gilded Age and Progressive Era. One of the most important but least recognized aspects of this dimension of his life are Roosevelt’s ecumenical convictions and his promotion of marginalized religious groups. Through Roosevelt’s influence, Jews, Mormons, Catholics, and Unitarians moved a little closer toward the American religious mainstream.

A prefatory word on Roosevelt’s spiritual pilgrimage is necessary. Although his own interior religious life was private, Roosevelt moved from a traditional Presbyterian and Dutch Reformed youthful faith to a more detached but still respectful outlook as an adult. As a college student he wrote explicitly of his faith in Jesus Christ and his hope of heaven. Lending support to this devotional posture, he taught a Sunday School class for underprivileged children all four years of his time at Harvard. Following the tragic deaths of his wife and mother on the same day in 1884, however, Roosevelt evinced more skepticism. He never regained his sturdy faith in the afterlife, he denied he was an orthodox believer, and he criticized the more conservative Protestant groups as backward and intolerant.

This broader outlook informed his ecumenism and support for religious minorities. (A desire to appeal to a variety of voters probably did too.) First, as president, Roosevelt appointed the first American Jew to a cabinet position when he made Oscar Straus Secretary of Labor and Commerce in 1906. Straus’s appointment came at a time when Jews were suffering persecution in foreign lands and were often looked on with distrust when they immigrated to the United States. Even though Roosevelt sometimes deployed anti-Semitic stereotypes himself, he wanted American Jews to believe that they were not going to experience discrimination in their adopted homeland.

Roosevelt’s moves on behalf of Mormonism occurred through his support of Utah Senator Reed Smoot, an Apostle in the Church of Jesus Christ of Latter-day Saints (LDS). Most non-Mormon Americans reviled the LDS throughout the nineteenth century. Mainstream Christians associated Mormon polygamy with barbarity and even slavery. After suffering a series of legal defeats in the Gilded Age, LDS leaders renounced polygamy in 1890. The abandonment of polygamy did not usher in a new era of tolerance, however. Although Utah sent Smoot to the Senate in 1903, he was subjected to sporadic hearings over the next four years regarding his fitness for office. While Roosevelt never approved of Mormonism, he came to believe that Smoot should not be punished for his religious affiliation. (It also helped that the senator was a Republican.) When the final hearings were being held in early 1907, Roosevelt on several occasions greeted Smoot loudly in public to signal his support. Several years later he explained, “if Mr Smoot…had obeyed the law…it would be an outrage to turn him out because of his religious belief.”

Protestant-Catholic antipathy had deep roots in the United States. Protestants of most varieties disliked Catholic theology, assumed Catholics were primarily loyal to the pope, distrusted parochial schools, denounced papal warnings about democracy, and worried about the Catholic immigrants flooding the nation’s shores in the late nineteenth century. Catholic priests were objects of special suspicion because they were celibate, conducted services in Latin, participated in a hierarchical order, and supposedly commanded the unquestioning loyalty of their flock. Although Roosevelt disliked elements of Catholicism, he also offered his hearty support to Catholic leaders who attempted to accommodate their faith to conditions in the republican United States. In 1911 he stated, “I spent a night with Father Curran at the Wilkes-Barre coal fields, and met some thirty priests at his house at lunch…. I really cannot say that I was very much concerned one way or the other with their theology … their work was what appealed to me in practical fashion.” If actions speak louder than words, Roosevelt followed through as well. When he went on a trip to South America in 1913 that culminated in his exploring the unknown River of Doubt, one of his traveling companions was a Catholic priest. Father John Zahm earned Roosevelt’s approval because he tried to reconcile traditional Catholic theology and modern science and had supported Roosevelt’s Progressive Party in 1912.

Unitarians were not marginalized in the same sense that Jews, Mormons, and Catholics were. Nevertheless, traditional Protestants deplored their theology, which denied that Jesus was God. When Roosevelt’s friend William Howard Taft ran for president in 1908, his Unitarianism became a controversial feature of the campaign. Some editors of religious periodicals urged their readers not to vote for a man who denied Christ’s divinity. Although Roosevelt waited until after the election to respond publicly to these attacks on his friend, his subsequent open letter left no doubt about his convictions. Roosevelt argued that asking religious questions of a candidate was un-American, that Taft’s theology was irrelevant to his qualifications for office, and that one day Catholics and Jews would come to occupy the presidency.

Roosevelt’s ecumenism had its limits. He was ambivalent about Islam, loathed what he thought of as primitive African religions, patronized Native American beliefs, and criticized agnostics and atheists. When he lampooned traditional Protestants and conservative Catholics for being narrow-minded, they could have easily returned the favor. They doubtless distrusted a man who seemed to have few theological beliefs at all and who preached what they would have regarded as a mushy tolerance. But for Jews, Mormons, Catholics, and Unitarians, Roosevelt’s efforts on behalf of religious ecumenism helped their groups edge a little closer to the American religious mainstream. Although not as widely recognized as his other accomplishments, Roosevelt’s religious tolerance is also part of his legacy.

Featured image: Theodore Roosevelt, 1910. Retrieved from the Library of Congress.

Benjamin J. Wetzel is Assistant Professor of History at Taylor University. He is the author of Theodore Roosevelt: Preaching from the Bully Pulpit.