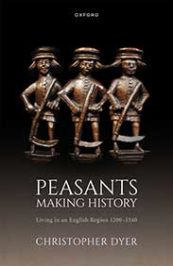 Everyone in the village of Sedgeberrow must have known Alice le Fynch, a determined personality defending  the interests of her family. She had to make decisions on her own when her husband Henry died, and she took over the management of the family land holding of 22 acres. In 1326, when she was in her fifties she planned to retire and hand the land over to the next generation. By customary law her son John should have succeeded, but she did not believe that he was capable of running the holding, and her neighbours, meeting in the manor court, agreed. Perhaps Alice persuaded them to reach that conclusion. Alice arranged for the main holding to go to her daughter Margery, observing the rule that the inherited land should not be divided. Agnes, the younger daughter was able to take over land that her father Henry had acquired, a custom that suited Alice’s ambition of providing for both daughters. The transfer cost money, as all new tenants were obliged to pay a fine to the lord of the manor. Margery, no doubt helped by her mother, had to find the large sum of £5 by borrowing, perhaps from a Tewkesbury corn merchant. The lord (or his officials) watched all this with interest, but did not intervene: the lord was gaining £5, and was reassured that a reliable tenant would pay the rents in the future. The lord and the leading villagers hoped that Margery would soon marry, as they preferred male tenants. The le Fynches were serfs, which was a burden to them in many ways, but their unfree status did not prevent Alice from taking the initiative and settling her family affairs.

This sketch of an incident in the life of rural Worcestershire does not accord with some prejudices about peasants still widely held. They were not controlled in all that they did by their lords. They were not stupid and ignorant, but manipulated law and custom in their own favour. They were not all miserably poor. They did not live in isolation, but looked outside their villages, for example to seek opportunities in neighbouring towns. Women did not lack authority, and had influence over the future of their families.

“Peasants should not be underestimated, as they were drawn into active roles in law, government, and religion, and could make up their own minds about issues in politics and religion.”

Peasants making history is about the decisions, choices, innovations, prejudices, errors, and achievements of medieval peasants. Lords had authority over them, but their spheres of activity were limited, and they were often dependent on the co-operation (sometimes reluctant) of peasants. Lords would found towns, but their subsequent growth was made possible by the migration of people from the country, who set up new businesses, or encouraged their sons and daughters to move. Once established, peasants’ sold their grain, livestock and other products in the towns’ markets, and the craftsmen and traders of the town supplied ordinary clothing, shoes and metal wares made locally. Peasant consumers were not limited to cheap local goods, but bought imports such as whetstones from Norway and millstones from Germany. Industry in the countryside, such as cloth-making, depended on a part-time peasant workforce and the skills of entrepreneurs including some of peasant origin.

These commercial developments were made possible by the output of the land, which gave the peasants their incomes. A common view is that peasants, restrained by tradition, observed unthinkingly the repeated annual cycle of sowing, harvest, lambing, shearing and dairying. But quietly and flexibly they were making important changes in the choice and rotation of crops, and in the balance between growing corn and keeping animals. They fenced off common land for private use as individuals, or on a large scale for the whole community. In adjusting their methods, they were facing the dilemma of all small-scale farming—should priority be given to supplying the household, or to sending a surplus to market?

The mindset of peasants has to be reconstructed from indirect hints in records written for official purposes, or the material remains of their settlements, houses, and possessions. Peasants should not be underestimated, as they were drawn into active roles in law, government, and religion, and could make up their own minds about issues in politics and religion. The community of the village was concerned with practical matters like regulating the fields, but also held enjoyable celebrations at which ale was drunk. We catch a glimpse of Alice le Fynch at a crucial point of making decisions that would change her family’s future. She would be able to take pleasure in village and family festivities, and would be familiar with popular games, music, stories, and drama.

Christopher Dyer is emeritus professor of history in the University of Leicester. His books include Standards of Living in the Later Middle Ages  (1989 revised 1998); Making a Living in the Middle Ages  (2002);  An Age of Transition? (2005); A Country Merchant (2012).

Isobel and me: medieval sanctuary and Whig history