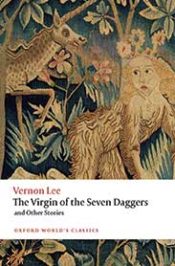 The Virgin of the Seven Daggers: and Other Stories

Some of the most acclaimed films to come out of the horror mini-boom of the past decade—Robert Eggers’s Witch (2015) and The Lighthouse (2019), Ti West’s X and its prequel Pearl (both 2022), and Goran Stolevski’s You Won’t Be Alone (2022) come to mind—mix history and horror in disconcerting ways. Of course, these are not the first scary movies or stories do this. In the early twentieth century one thinks, for instance, of weird fiction by Marjorie Bowen, M. R. James, and William Hope Hodgson, among others. But when, and how, did horror first get historical?

Interestingly, history and horror, it might be said, were born at the same time, fraternal but far from identical twins gestated some 250 years ago in the womb of the European Enlightenment. This needs qualification. I refer on the one hand to modern historiography—as an emergent discipline bringing new methods and standards, as well as a new emphasis on cultural production, to bear upon the study of the past—and on the other to the Gothic novel, a genre which appeared as a kind of counter-reaction to the prevailing rationalism of the age. Gothic fiction was similarly obsessed with, and often set in, the historical past. But “history” is a murkily imprecise thing indeed in the novels of Horace Walpole, Ann Radcliffe, and their successors—miles away from the rigorous conception of history evident in the works of such contemporary figures as (say) Voltaire and Edward Gibbon. Over the next century or so, both historiography and early horror fiction continued to evolve both separately and, gradually, in conjunction, as a few writers attempted to integrate a nineteenth-century historical consciousness into the writing of weird fiction (Elizabeth Gaskell is one such pioneer).

Enter Vernon Lee. Born Violet Paget in 1856 on the French coast of the English Channel, Lee grew up in France, Switzerland, Germany, and Italy, and apart from a brief childhood visit, she did not travel to England until she was in her mid-twenties. She began writing in her early teens, and never stopped: by the time of her death in 1935, she had authored essays and books on art, language, psychology, travel, and myriad other subjects, as well as works of fiction and drama. In short, Lee was a true polymath, who over the course of a long writing career produced outstanding work in a wide range of intellectual fields.

It is primarily her (relatively infrequent) forays into the Gothic and fantastic, however, for which Lee is remembered today. She has long been highly rated by connoisseurs of the horrible—Montague Summers wrote in 1931, “Hauntings is a masterpiece of literature, and even [Sheridan] Le Fanu and M. R. James cannot be ranked above the genius of this lady”—but her nonpareil Gothic tales have never really broken through to a wider audience; nor has she ever been given her due as an influencer (as we say today) within the genre. It is often pointed out that she was influenced by her friend (or better, to use another twenty-first-century epithet, frenemy) Henry James, but it seems to me possible—even probable—that James’ “The Master” was inspired by Hauntings, which Lee had sent him in 1890, as he declared it “gruesome, graceful, genialisch [ingenious]”, and helped a return to fantastic writing after a decades-long hiatus. His 1897 masterpiece The Turn of the Screw in particular has a great deal in common with Lee’s earlier novella A Phantom Lover—also known as Oke of Okehurst—not least its disconcerting ambiguity (are its ghosts real, or the psychological projections of a disturbed mind?).

“She sought to reproduce in her stories that same sense of total immersion into a vanished past.”

But first, and arguably foremost, she was an historian: her first book, published when she was only 24 and titled Studies of the Eighteenth Century in Italy (1880), was a deeply learned, insightful, and well-received example of the new discipline that we call “cultural history,” a branch of historiography pioneered by the Swiss historian Jakob Burckhardt, whose great study The Civilisation of the Renaissance in Italy (1860) was a major influence on the young Violet Paget. She had first become obsessed with the art, music, literature, and history of eighteenth-century Italy while rambling through Rome and Bologna with her childhood friend John Singer Sargent (the future painter) and his family, writing later of her profound immersion in that lost world: “The eighteenth century existed for me as a reality, surrounded by faint and fluctuating shadows, which shadows were simply the present.”

It is little wonder, then, that when Lee turned her hand to supernatural fiction, she sought to reproduce in her stories that same sense of total immersion into a vanished past, particularly that of her beloved Italy. Sometimes, as with the conte cruel “A Wedding Chest”, a scrupulously reimagined historical moment serves as setting for the tale; other stories, such as “The Virgin of the Seven Daggers” and “Prince Alberic and the Snake Lady”, blend history and fable with often ironic effect (one might call these “historified” fairy tales).

Lee’s richest and most unsettling fictions, on the other hand, tend to shuttle between past and present, featuring modern protagonists whose engagements with history end in disaster. In this category we would place, for instance, her first attempt at a Gothic tale, the rather awkwardly titled “A Culture-Ghost; or, Winthrop’s Adventure” (first published in Fraser’s Magazine in 1881), as well as her thorough revisioning of the story, “A Wicked Voice”, which originally appeared as “Voix Maudite” in the French journal Les Lettres et les Arts in 1887. Both stories center upon a modern (i.e. late nineteenth-century) protagonist who finds himself the victim of an uncanny voice from the past, haunted by the bewitching song of a castrato singer from the previous century (loosely modelled after the superstar soprano Carlo Broschi, AKA Farinelli). Then there is the protagonist of “Amour Dure”, a young historian engaged in researching the counterfactual city-state of Urbania, who finds himself ensnared by a long-dead femme fatale, the Renaissance beauty Medea di Carpi, who reaches out to him across the centuries through a variety of media, dragging him to his doom.

The past (as the old saw has it) is a foreign country—they do things differently there. At its best, historical horror foregrounds this strangeness, exploiting the radical otherness of the past to establish and intensify a potent atmosphere of dread and unease. And no one, before or since, has ever been able to do this with as expert a hand as Vernon Lee.

Aaron Worth is an Associate Professor of Rhetoric at Boston University who has previously edited The Great God Pan and Other Horror Stories (2019) and Green Tea and Other Weird Tales (2020) for Oxford World's Classics. He is the editor of The Virgin of the Seven Daggers: and Other Stories (OUP, 2022).

How well do you know these spooky Oxford World’s Classics?