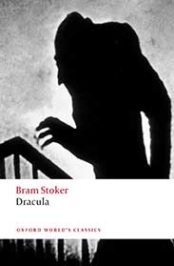 The 26 May 2022 marks the 125th anniversary of Dracula’s publication, although its infamous villain is centuries older. Dracula follows the vampiric Count as he attempts to take over Victorian London. Only a group of ordinary men and women, the Crew of Light—led by the vampire hunter Van Helsing—stand in Dracula’s way.

Despite its reputation as one of the great Gothic novels, there are facts about Dracula that might surprise even the most hardcore fans. Read on to discover five facts you may never have known about Dracula.

1. Dracula could have been a very different novel

Like many writers, Bram Stoker went through multiple ideas before coming up with the final plot of Dracula. One early idea was a dinner party at Doctor Seward’s house. Thirteen guests are asked to tell a strange story, their tales connecting once they’ve all been told. Dracula would then crash the party. Other ideas included calling Dracula “Count Wampyr” having one of the Crew of Light killed by a werewolf, and a terrifying scene at the “Munich Dead House.” We know this because of the extensive notes Stoker made, over 100 pages now held in the Rosenbach Museum and Library in Philadelphia.

Despite being a vital location in Dracula, Bram Stoker never visited Eastern Europe. His notes show that he researched Transylvania extensively, including its folklore and history. In 2019, The London Library discovered the original books that Stoker used in his research, with notes by him in the margins. From E. Gerard’s The Land Beyond the Forest to Rev Albert Réville’s The Devil, 26 books in The London Library have been confirmed as part of Stoker’s research.

Dracula was translated into Icelandic in 1901 by Valdimar Ásmundsson, a newspaper editor. The result was Makt Myrkranna, also known as Powers of Darkness. Despite Stoker writing the foreword for this edition, Valdimar Ásmundsson took great liberties when translating the text. When it was translated back into English, it was discovered that Ásmundsson had added more gore and eroticism, cut the novel’s length, and removed the multiple narrators. However, some critics claim Ásmundsson’s prose is better than Stoker’s!

4. Stoker wrote a Dracula play… and it wasn’t very good

On 18 May 1897, Stoker put on a performance of Dracula before the novel was even published. Adapting plays from unpublished novels was common in Victorian times, as it ensured the author retained dramatic rights to their story. Stoker quickly put together a mixture of extracts from the novel and additional written dialogue. The resulting play was six hours long, with many of Dracula’s most iconic scenes reduced to long speeches. Only two people paid to watch this dramatic reading. Stoker’s boss, actor Henry Irving, refused to play the title role and apparently called the play “dreadful.”

5. Dracula wasn’t based on Vlad the Impaler

It’s commonly believed that Bram Stoker was inspired to write Dracula after hearing stories about Vlad the Impaler, a Transylvanian prince believed to drink the blood of his enemies. However, Vlad the Impaler is never mentioned in Stoker’s notes for Dracula, despite his deep research into Transylvanian history. Bram Stoker found the name Dracula while on holiday in Whitby. It means “devil” in Romanian and was commonly a surname given to famous (and infamous) figures. The fact that this was one of Vlad the Impaler’s titles, however, is pure coincidence.

Catrin Lawrence is a Publicity and Marketing Assistant at Oxford University Press.

A literary history of Modernism [timeline]