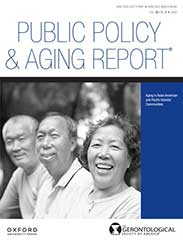 Over the past few years—often but not always driven by the COVID-19 pandemic—we have had great discussions and debates over societal inequalities in our nation’s infrastructure, and hopefully these in turn will result in policy changes. Aging, too, is having such a review as we think through how older people of color face disparities in key needs such as financial security, housing, and healthcare.

Also striking within this debate is an elevation of challenges facing the Asian American and Pacific Islander (AAPI) community in these policy debates. AAPIs have a complex history in the United States with the spectrum running from being signaled out for outright exclusion from immigration laws to then being branded as a model minority and consequently a wedge for identity politics. In particular, the “model minority” myth inflates AAPIs’ socio-economic status and economic success, suggesting that older AAPIs may not need services and supports to help them successfully age well.

Events during the pandemic shined a light on barriers facing AAPIs that were previously ignored or invisible. First, COVID-19 has had disproportionate effects among AAPIs. From a health perspective, the Government Accountability Office noted that certain AAPI populations are overrepresented among COVID-19 cases but underrepresented in vaccinations. From an economic perspective, the pandemic has devastated sectors where AAPIs are overrepresented such as retail and hospitality.

Second, individual AAPIs faced violent attacks due to misperceptions and racist beliefs on COVID-19’s origins. The Pew Research Center found that nearly four in five AAPI adults believed violence against them is increasing, and nearly a third of AAPI adults feared being threatened or physically attacked. These attacks, including horrific shootings in Atlanta and Indianapolis, led Congress to pass the COVID-19 Hate Crimes Act, which will improve data collection on hate crimes and provide additional educational resources through the federal law enforcement and health agencies. Several incidents of violent attacks on older AAPIs highlighted gaps in key aging services—transportation, financial security, caregiving resources, and in-language services, among others—that should be part of building our community’s policy agenda.

Regardless of why the discussion is happening, having it is critical to understanding how policies and systems should adapt to meet the needs of the fastest growing demographic in the United States. The AAPI designation though is incredibly diverse with nearly all of the Asian American community tracing its origins to 19 different countries. In the 2020 census, the Asian American community grew by 81%. At such a rate, one analysis predicted that the Asian American population could more than triple by 2060 and will be the largest immigrant group by 2055. Just like the United States overall, the AAPI population will age, too: the Administration for Community Living notes that the number of older Asian Americans also will triple from 2.5 million in 2019 to nearly 8 million in 2060.

“When AAPIs are viewed as a whole, differences can be difficult to notice, but when data is disaggregated, significant variation and health disparities become visible.”

But the larger movement toward greater inclusion of communities of color has not come without criticism. For instance, a Wall Street Journal editorial decried “how woke politics is about to infect medical education.” But at the same time, the editorial acknowledges that understanding relationships between race and disease or recognizing social determinants can help with patient outcomes. It fails, however, to connect that acknowledgment with how having some understanding of the role of existing systems—including the healthcare system—can reinforce, rather than reduce, health disparities and inequities. Connecting these dots could help provide a constructive dialogue on educational curriculum for health and aging professionals.

For AAPIs, seeing professionals who have a better understanding of issues facing our community would lead to improved outcomes and better conditions. For example, the editorial’s conclusion laments that newly-trained physicians will be too overwhelmed “attend[ing] to their guilt” to make a cancer diagnosis, but if health professionals learn to be aware of disparities such as disproportionate rates of cancers among different Asian ethnicities, they may consider screening an AAPI patient differently. In other words, when AAPIs are viewed as a whole, differences can be difficult to notice, but when data is disaggregated, significant variation and health disparities become visible. Tools like artificial intelligence could alert a physician, too, to such disparities.

This example also highlights a unique phenomenon facing the AAPI community in its advocacy. While the increase of AAPIs should lead to its growing clout within policymaking, AAPIs’ rich diversity creates a challenge in developing policies that can neatly fit their needs. As noted, AAPIs are often grouped together as a “model minority,” but they come from numerous different countries with their own language, culture, religions, and other characteristics, making it difficult to articulate an AAPI view on critical issues like aging. While we can gain strength from positioning ourselves as a single collective, failing to recognize differences can lead policymakers—often incorrectly— to see us as not needing assistance, especially if we do not advocate for it.

As we emerge from the pandemic, we must learn from the despair that it has caused to make our social services, including our aging services, more equitable. We can restructure aging services and supports to be not only more responsive to our country’s needs but also more equitable for AAPIs and communities of color writ large.

Oliver J. Kim, JD, LLM, is director of health policy at the Bipartisan Policy Center and the former deputy staffer director of the Senate Aging Committee.

In a volunteer capacity, he is the current board chair of the Asian & Pacific Islander American Health Forum, a national nonprofit dedicated to improving the health of the Asian American, Native Hawaiian, and Pacific Islander community. Views in this blog are solely his own and should not reflect the position of any of affiliated organization.