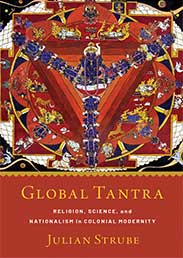 For good reasons, tantra often stands at the center of debates about cultural appropriation and the commodification of religious practices. Through nineteenth-century orientalist studies and missionary polemics, it became associated with sexual licentiousness and abhorrent rituals before it was refashioned as a way to sexual liberation and individual freedom. While it is difficult to define what exactly “tantra” means, experts agree that it forms an integral and prominent part of Hinduism, another hard-to-grasp category encompassing a vast variety of teachings and practices. Clearly, the sensationalist and commercialized takes on “tantra” are at odds with the historical and doctrinal depth of the subject. Critics from the spectrum of postcolonial studies and classical Indology alike have thus rightfully pointed out the many flaws in common perceptions of tantra.

Yet, while postcolonial criticism in particular contributed to our understanding of how the meaning of tantra was shaped under the conditions of colonialism, it sometimes tended to eclipse “non-Western” actors in ways similar to Eurocentric scholarship, which assumed Europe at the center from which “modernity” diffused to a mostly passive “rest.” This issue is mirrored by the elusive subject of religion, the worldwide application of which is often perceived as the result of Western projection, Orientalist imagination, and (epistemic) violence. Are present-day understandings of religion and tantra the result of Western colonialism? Was “traditional,” precolonial tantra disconnected from its modern variant?

The situation is more complicated. Of course, understandings of tantra were significantly shaped within a colonial context, and it is crucial that our historiographies reflect that circumstance. Yet, those Indian (and other) actors who participated in debates about the meaning of tantra were not the passive recipients of Western knowledge. While most scholars today would subscribe to this statement, modern tantra is an instructive example of how “non-Western” actors are still often not taken into consideration in their own right.

“Modern tantra is an instructive example of how ‘non-Western’ actors are still often not taken into consideration in their own right.”

Today, tantra would hardly be as prominent—both among practitioners and academic scholars—without the writings of a pseudonymous “Arthur Avalon,” who established tantra as a serious object of inquiry from the 1910s until the 1930s. For long, it was thought that the British judge, John Woodroffe (1865–1936), had been responsible for this project. However, it was in fact a team of learned South Asians, mostly Bengalis, who did the work and happily presented Woodroffe as its figurehead. While many are aware of this fact, this local background of the Avalon collaboration has never been examined in its own right.

Doing so reveals a picture of complex and often ambiguous cultural exchanges. The region of Bengal, with its famous centers of learning such as Navadvip and Krishnagar, was in itself a rich cultural sphere where various Hindu, Muslim, and later European currents mingled: this is where Chaitanya heralded devotional Vaishnavism, where Shaiva-Shakta traditions elevated Kali and Durga to major deities of Bengal, where Mughal culture prospered, and where orientalists such as William Jones were trained. The tantras formed an integral part of learning in Bengal. In the nineteenth century, the pandit Shivachandra Vidyarnava (1860–1913) was among its most prominent defenders, praising tantra as the core of sanātana dharma, the unchangeable and eternal truth of the Vedas. Shivachandra was not only the guru of Woodroffe himself, but of several of the collaborators on the Avalon project—among its first publications was Principles of Tantra (1914/16), a translation of Shivachandra’s magum opus, Tantratattva.

“If we understand that present (re-)negotiations of ‘tantra’ or ‘religion’ are global, then we must acknowledge that their histories are, too.”

At the same time, those who collaborated on Avalon were not only shaped by this cultural sphere but also by British-European education and ideas. They engaged with prominent contemporary movements, such as the Theosophical Society. Again, previous scholarship has viewed the activities of this society, which had been founded in New York in 1875 and shortly after relocated to India, in terms of a diffusion of “Western esotericism.” However, Theosophy entered a complex intellectual landscape and became subject to Indian debates. Its search for the origin of “Aryan civilization” in India led to a particular interest in tantra, which Shivachandra and his disciples presented as the “esoteric” essence of the Vedas. Not least through Theosophical and other “esoteric” channels, tantra and related subjects like yoga were transmitted to Europe and elsewhere, leading to the prominence it enjoys today.

This was not the result of a “meeting between East and West,” nor a conflict between modernity and tradition. Nor was it the outcome of a romanticized, peaceful process, as these exchanges did unfold within the context of colonialism and went hand in hand with nationalism, struggles, and the ambiguity of racial theories such as Aryanism. The activities of the Bengali tantrics behind Avalon illustrate how we need to take into account both local, diachronic developments reaching back to the precolonial period and the global connections that continuously shaped them. If we understand that present (re-)negotiations of “tantra” or “religion” are global, then we must acknowledge that their histories are, too. The approach of global religious history is one attempt to grasp these complexities.