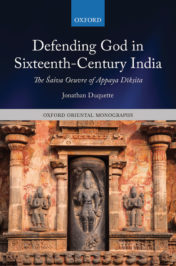 The early modern period in India (roughly from 1550 to 1750) has been increasingly understood as a time of heightened religious self-awareness—the fertile soil from which Hinduism emerged as a unified world religion. Yet it was also a tumultuous period of intense rivalry across scholarly and religious communities. Scholars debated one another on matters of doctrine and religious practice, turning as well a critical gaze toward the founding figures of their respective schools of thought. Traditions diversified internally and new movements emerged that attempted to dislodge their predecessors. Polemical tracts circulated across wide networks of Hindu intellectuals who were writing principally in Sanskrit.

One area in which this contentious atmosphere of debate was evident was theology—the discourse on God within the purview of the manifold and long-standing tradition of Vedānta. On the eve of the 16th century, Vedānta was essentially a bastion of scholars who interpreted canonical texts as promoting the view that God is Viṣṇu (one of the major Hindu deities). The flowering of Vaiṣṇava scholarship in this period, particularly in South India, was partly engendered by shifts in state policy and patronage practices that favoured Vaiṣṇava scholars and institutions to the detriment of other religious communities. In this context of religious tensions and inter-scholarly disputes, a major break occurred towards the end of the 16th century.

Appaya Dīkṣita (1520-1593) was a smārta brahmin from Tamil Nadu (South India) and a scholar of polymathic erudition who devoted a large share of his long and prolific career to writing about Śaivism, a major religious tradition centred on Śiva (another major Hindu deity). Across nearly three decades, Appaya devoted himself to an ambitious theological project under the patronage of an independent Śaiva ruler: that of displacing the dominant Vaiṣṇava theology of Vedānta in favour of a Śaiva theology that would effectively promote God’s unity. His wide-ranging writings inspired a kind of revolution in Vedānta theology that would last until the 20th century.

A devotee of Śiva by upbringing, Appaya saw himself primarily as a representative of Advaita Vedānta, the “pure non-dualist” school of Vedānta, which holds the view that the supreme reality or godhead is ultimately beyond form, thought, and language. Appaya’s early Śaiva writings were unmistakably polemical, at times adopting a rather aggressive rhetoric against Vaiṣṇavas:

The Vedas openly declare that only You, Śiva, transcend the universe and ought to be worshipped by all people, and yet, alas, rogues dispute even that. What is this life of them, lost because of their irrepressible need to offend You? [Only] death is considered to expiate those who listen to their words.

In these works of relative jeunesse, Appaya aims to undermine Vaiṣṇava superiority and silence the “blabbering of these evil-minded people” who deny the value of worshiping Śiva. His staunch position that Śiva—not Viṣṇu—is the supreme reality and the only deity that ought to be worshipped was unprecedented in the realm of Vedānta theology in terms of its scope and influence.

As his career progressed, however, Appaya shifted his focus away from polemics to embrace a more comprehensive view of God’s unity. In his later works, he displays a remarkably tolerant attitude towards Viṣṇu, even insisting that Viṣṇu’s divinity is on par with Śiva. In his own words:

My tongue could not move to assert…that the revered Viṣṇu is merely an individual being [and not a divinity]. If I did so, my head would burst into a hundred pieces and I would be [guilty] of treachery towards the Vedas, the sages and the deities.

Unlike Vaiṣṇavas before him, who had unanimously claimed that Śiva is merely an exalted being with no divine qualities, Appaya now held that Viṣṇu is just as much divine as Śiva. Reading his entire Śaiva oeuvre, it becomes clear that Appaya’s early polemical tracts were intent on defending Śaiva religion against Vaiṣṇava invectives rather than gratuitously attacking Vaiṣṇavas. Indeed, he explicitly demands that the divinity of Śiva be recognised just as he himself acknowledges Viṣṇu’s divinity.

Appaya’s attempt at developing a theological model that regards all Hindu deities as divine aspects of the same non-dual reality not only attracted criticism from Vaiṣṇava scholars, but also from Advaita Vedāntins and Śaivas who considered his proposal too radical. Yet his project was successful to the extent that it left a deep impression on, and effectively transformed the theological landscape of, early modern India. For Appaya, it is in the end unimportant whether one prefers to worship Śiva or Viṣṇu. Pure non-dualism, in his view, provides an encompassing approach to reality that can accommodate and integrate all philosophical views and religious approaches. Debates about what deity is supreme are not productive insofar as all deities are ultimately expressions of the same non-dual, ineffable reality. If it was indeed important for Appaya to defend Śaiva religion in the face of threatening encroachments on religious freedom, it was all the more crucial to acknowledge that no religious approach can supersede other stances. In this sense, Appaya was an early precursor of the view that Hinduism encompasses and in effect transcends all religions—a view that would later be popularly promulgated by Hindu reformers such as Sarvepalli Radhakrishnan and other defenders of religious freedom in colonial India.