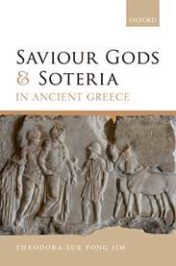 At some point during the fourth century BC, an Athenian brought an offering to the shrine of Asclepius. His inscription reveals that he was “saved” from some “mighty rocks” and his marble relief depicts himself and his mules drawing a wagon and approaching the god (IG II/III3 4, 672). Was he injured in a landslide together with his animals, but restored to health by Asclepius? Far away from the Greek mainland, in Kollyda in Lydia, a married couple set up a marble altar to Zeus “for the safety (soteria) of themselves and their children” after two people (perhaps their acquaintances?) were struck dead by lightning (TAM V.1 360). They were not, as one might expect, praying for the “salvation” of the deceased, but their own self-preservation from the anger of the god.

These are just two examples among numerous dedications, scattered all over the Greek world, testifying to the saving power of the gods. From the late Archaic period (c. 700 BC) onwards, an impressive number of gods and goddesses in the Greek pantheon are attested under the title of “Saviour” (Soter and Soteira in Greek). These divinities oversaw the protection of individuals and cities and had the power to grant or withdraw an essential blessing―soteria, which can be variously translated as “deliverance,” “preservation,” and “safety.” But what did it mean to be “saved” in antiquity? In a polytheistic system where multiple gods and goddesses reigned, which ones did the Greeks turn to as their “saviour,” and how could the gods be persuaded to “save”?

“Where multiple gods and goddesses reigned, which did the Greeks turn to as their ‘saviour,’ and how could the gods be persuaded to ‘save’?”

The Greek concept of soteria had close and entangled relations with Christianity. The same Greek word is also used in Christian writings, not least the New Testament, to signify deliverance from the consequences of sin and attainment of a blessed afterlife through the mediation of Christ the Saviour. Yet as the above episodes show, the concept goes back to Greek antiquity, but its centrality in ancient Greek religion has long been obscured by its later importance in Christianity. It is tempting to assume that soteria was a predominantly Christian concern of little or no relevance to other religious traditions, or to project Christian notions of this concept retrospectively onto the Greek concept. Such misconceptions are commonplace in scholarship in the nineteenth and twentieth centuries. In fact, long before the rise of Christianity, soteria already had a central and significant role in the relationship between the ancient Greeks and their gods. It entailed a different experience or experiences from the one that we, after more than two millennia of Christian traditions, have come to associate with the term.

What roles, then, did the Greek “saviour” gods play in the life of the Greeks? How did worshippers search for soteria as they confronted the unknown and unknowable? Whether in normal circumstances or in times of need, the Greeks would approach their gods with prayers, sacrifices, and votive offerings praying for soteria. For Greek cities, this could concern deliverance from an external threat, safety from natural disasters, and preservation of their political constitutions. For individuals, this could be deliverance from war, safety at sea, recovery from illness, a smooth childbirth, economic security, and physical well-being more generally. It is interesting to note that the experiences covered by soteria overlap in fact with a lot of our own concerns in the modern day. However, this multivalent concept, with its range of meanings, remains surprisingly difficult to pin down and defies translation by any single English word. What is certain is that, despite the wide-ranging power of the Greek “saviour gods,” what they offered was limited to deliverance on earth: soteria for the Greeks had little or nothing to do with the afterlife.

Over time, the familiar Greek word soteria was adopted in Christianity but given a new, eschatological aspect not previously associated with it in Greek tradition. Despite this new promise, what is striking is that the earthly aspect continued to be important even in Christian soteria, that is, common ground existed between Greek and Christian concepts of soteria. Even after the legalization of Christianity in the Roman Empire, both pagans and Christians continued to use soteria in a this-worldly sense. So deeply ingrained is the earthly character of Greek soteria that salvation on earth remained part and parcel of the Christian notion of soteria. The remarkably stable and persistent character of soteria for almost a millennium testifies to how deeply rooted the concept was in Graeco-Roman culture, how widely shared the concerns were across different religious groups, and how central and fundamental this blessing was in any relationship between human beings and the divine.