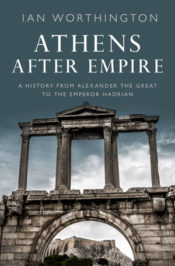 The question of whether Athens was a Greek or Roman city seems straightforward, but among scholars there is some debate. While initially, and still geographically, a Greek city, the influence of the Roman Empire on Athens’ architecture, beginning in the first century BC with Pompey the Great, has led some scholars to classify it, architecturally, as a Roman provincial city. Pompey’s donation of fifty talents in 62BC was said to have financed a “bazaar” to display goods in the Piraeus (the harbor and center of economic activity) and perhaps the 12-meter tall Tower of the Winds (now restored), which was a horologion (timepiece) and, arguably, the world’s first meteorological station. Julius Caesar gave another fifty talents, which saw work begin on the Roman Agora, a project finished in the Augustan era thanks to yet another monetary donation, this time from Augustus himself.

This Roman Agora was nowhere near as extensive as the Athenian one, but its ruins show it was impressive, with a monumental gateway at its entrance (still standing today). Augustus went further though. He commissioned a temple of the goddess Roma and himself in front of the Parthenon on the Acropolis, with statues of himself (and perhaps other members of the imperial family) as well as the goddess Roma, and most likely housing the imperial cult. Later emperors followed suit. Claudius likely funded a marble stairway to the Propylaea of the Acropolis, and in Nero’s reign the theater of Dionysus was rebuilt.

It was not only rulers who built in Athens. Agrippa (Augustus’ son-in-law and righthand man) added a massive Odeum (theater), able to seat one thousand people, in the old Athenian Agora, which dwarfed all the other buildings around it. At some point in Trajan’s reign a certain Titus Flavius Pantaenus built what is often called a library in the Athenian Agora, though it was a grander monument than just a library as it included outer Stoas and a peristyle (an open-colonnade area).

But it was Hadrian who embarked on the most ambitious building program, which outdid that of Augustus and even Pericles in the fifth century or Lycurgus in the fourth. Hadrian had made Athens the cultural center of the Roman Empire by creating a league of Greek cities of the east with Athens at its center, called the Panhellenion. He wanted to beautify the city as befitted its new status. Thanks to him the massive temple of Olympian Zeus was completed (whose giant columns today rear to the sky); a temple of Hera and Zeus Panhellenius was built; as was a splendid library (with 100 columns) that also included gardens and colonnades; a gymnasium; and an aqueduct, to name but a few.

The archaeological remains of these buildings testify to their size and design and add to the notion that Athens had been turned into a provincial city. The new agora, for example, had some Greek architectural designs, but there was no mistaking Roman influence, such as the enclosed large marble-paved square with shops and halls on all four sides, and the later addition of a statue of Lucius Caesar atop its gate effectively turned it into a Roman triumphal arch. Agrippa’s Odeum also had Greek architectural elements to it (a Corinthian façade and capitals), but it was based on a smaller theater at Pompeii. And Hadrian’s library was probably modeled on the temple of Peace at Rome, with its library, art gallery, and garden. Reflective of these physical changes—and surely supporting the notion of the Romanizing of Athens—is the famous Arch of Hadrian, which the Athenians erected to him as a thanks offering in AD 132 (and still standing). It bore two inscriptions, one of which seems to speak volumes: “This is the city of Hadrian, and not of Theseus” (the mythical founder of Athens).

There is no doubt Athens was physically changing. But that does not mean the city was being completely Romanized—the archaeological and architectural evidence is misleading and must be considered alongside the other anthropological knowledge available. Athens sprawled out quite a distance as it was the largest city in Greece, and it had monuments all over it—the vast majority stretching back to the classical era. Even the extensive building programs of Augustus and Hadrian did not suddenly transform the city skyline into a Roman one. The circular temple of the goddess Roma and Augustus on the Acropolis was only about eight meters in diameter and nine high, but, standing in front of the Parthenon as it did, it would have been dwarfed by that great temple to Athena. The sheer size of the Roman Odeum made its Roman presence impossible to miss, but it did not take up the entire Agora, nor did it put an end to people going there to do business, gather and talk about life and current affairs (as they had for centuries)—and appreciate all the Greek monuments there.

From the latter half of the first century BC increasing Roman involvement in Athens was evident in the numbers of Romans visiting, studying, and living there, and then the building activities. Rome impacted Athens for certain but did not cause the city to lose its “Greekness” and become a provincial one. The extent to which Roman architecture altered Athens has been exaggerated.

We should remember that the inscription “This is the city of Hadrian, and not of Theseus” on Hadrian’s Arch faces the direction of the temple of Olympian Zeus and reflects the focal point of Hadrian’s Panhellenion, headed by Athens. But there was also another inscription on that arch, this one facing what had been, and would always be, the citadel and sacred center of the city the Acropolis; this inscription (only a few feet from its “pro-Roman counterpart”) proudly proclaimed it to all: “This is Athens, the ancient city of Theseus.”

Ian Worthington is Professor of Ancient History of Macquarie University. He is the author of numerous books about ancient the ancient world, including, most recently, Ptolemy I: King and Pharaoh of Egypt, By the Spear: Philip II, Alexander the Great, and the Rise and Fall of the Macedonian Empire, and Demosthenes of Athens and the Fall of Classical Greece.

The Ancient Celts: six things I learned from Barry Cunliffe