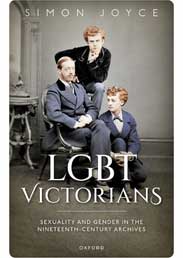 LGBT Victorians: Sexuality and Gender in the Nineteenth-Century Archives

The first challenge that confronts researching LGBTQ+ Victorians in the archives is the question: where to look? Typically, we know of LGBTQ+ people from medical records and legal transcripts, neither of which can be read as value-neutral. Even at the time, advocates recognized this difficulty. In his privately-circulated A Problem in Modern Ethics from the 1890s, for instance, John Addington Symonds worried that our understanding of homosexuality skewed towards what we now think of as situational (as opposed to congenital) same-sex experience because one of the most accessible populations to survey were those in prisons. The poet and activist Edward Carpenter similarly felt that groundbreaking work in Germany by the psychiatrist Albert Moll over-emphasized the presence of cross-gender expression because the police had steered him towards male prostitutes as his study’s main cohort.

The situation is, if anything, worse when we try to find people in the archives that could now be considered transgender. To the extent that we know of such people—some figures I focus on include Eliza Edwards, Frederike Blank, Fanny Park, and Stella Boulton—their existence is dependent on legal records and the documentation of physical exams, sometimes post-mortem, as the only evidence that each was affirmed male at birth. What we don’t and can’t know about is the quietly successful lives of those who accomplished a social transition and were never exposed—a point that Jen Manion has made in her excellent recent study of female husbands, who were only known after somebody registered a complaint and initiated an inquiry into their gender at birth.

Among other things, this reliance on medical and legal archives casts the entire topic in the mode of tragedy, promoting the idea that all queer people were eventually found out and punished. It doesn’t help if we see the nineteenth century as progressing inexorably towards the trial and conviction of Oscar Wilde, which conveniently occurred in the last half decade of the century. 1895, I argue, has become a fixed terminus around which we’ve tended to organize LBGTQ history. This can blind us to ways that the law wasn’t always triumphant, as I document in recording two striking failures.

“Reliance on medical and legal archives casts the entire topic in the mode of tragedy, promoting the idea that all queer people were eventually found out and punished.”

The first is the libel suit brought by two Edinburgh schoolteachers, Jane Pirie and Marianne Woods, who were accused of “unnatural” sexual relations while in loco parentis, a counter-charge which (in stark contrast to Wilde’s) was ultimately successful. The other is the trial of Boulton and Park, who were accused of conspiracy to commit sodomy based mainly on their cross-gender presentation. Their exoneration underscored the important legal conclusion that gender expression was not in itself an actionable offense—but you wouldn’t know this from historians of sexuality who have tended to assume a) that they were guilty as changed, and b) that the embarrassment caused by their victory led to a tougher legal approach in the case of Wilde, which took place a quarter century later. Disentangling the two cases from each other, however, can help us to see that they have little to do with each other. However, we can only do so if we can understand that Fanny and Stella are better understood as embodying very different people in the LGBTQ+ coalition: not cross-dressing gay men but something much closer to modern trans women.

I make this argument based mainly on more “private” documents (especially letters between them) that indicate what we’d now see as a persistent, consistent, and insistent desire to live as women—though ironically, those letters are also accessible to us now only as evidence in their trial! This of course highlights the paradox and difficulty of doing this work of archival reconstruction: without the trial, such letters would almost certainly been lost to history; because they exist, however, they form the earliest OED entries for the word “drag”.

That this is a fragile archive should be obvious, and it’s in many ways a miracle that some of it has survived. I think of Anne Lister’s diaries, which have upended what we know about nineteenth-century lesbianism and are now part of Unesco’s “Memory of the World” registry—as well as the source for the successful TV series Gentleman Jack. Lister wrote her diaries in part in a cryptic code she could never have imagined anyone would crack, and she hid them in a paneled room where we had no right to find them—much less begin a process of transcription over a century later that is still ongoing. Similarly, Symonds’ memoirs were written in secret and given to a friend with directions only to publish if they wouldn’t cause offense to his wife and daughters. Like the Lister diaries, they were locked away, waiting and hoping against the odds for a future moment when we would be interested enough to disinter and make use of them.