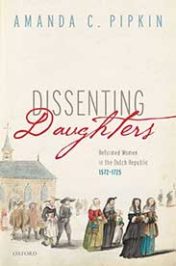 Since 1987, Women’s History Month has been observed in the US annually each March as an opportunity to highlight the contributions of women to events in history and contemporary society. This month, we’re sharing some of the latest history titles covering a range of eras and regions but all charting the lives of women and the impact they made, whether noticed at the time or from the shadows.

Dissenting Daughters reveals that devout women made vital contributions to the spread and practice of the Reformed faith in the Dutch Republic in the sixteenth and seventeenth centuries. The six women at the heart of this study—Cornelia Teellinck, Susanna Teellinck, Anna Maria van Schurman, Sara Nevius, Cornelia Leydekker, and Henrica van Hoolwerff—were influential members of networks known for supporting a religious revival known as the Further Reformation.

Cleopatra’s Daughter: and Other Royal Women of the Augustan Era by Duane W. Roller

This is the first study of the royal women who ruled in the Mediterranean in the latter half of the first century BC , in a symbiotic relationship with the Roman government. Several are discussed, with the most prominent being Cleopatra Selene (the daughter of the famous Cleopatra VII of Egypt) and Salome, the sister of Herod the Great.

In 1834, a young Chinese woman named Afong Moy arrived in America, her bound feet stepping ashore in New York City. She was both a prized guest and advertisement for a merchant firm—a promotional curiosity used to peddle exotic wares from the East. Over the next few years, she would shape Americans’ impressions of China even as she assisted her merchant sponsors in selling the largest quantities of Chinese goods yet imported for the burgeoning American market.

Propaganda, Gender, and Cultural Power: Projections and Perceptions of France in Britain c1880-1944 by Charlotte Faucher

Charlotte Faucher analyses the powerful motivations that fueled members of civil society, and in particular women, to dedicate their resources in the pursuit of improving the image of France in Britain through cultural strategies.

Only the Clothes on Her Back: Clothing and the Hidden History of Power in the Nineteenth-Century United States by Laura F. Edwards

What can dresses, bedlinens, waistcoats, pantaloons, shoes, and kerchiefs tell us about the legal status of the least powerful members of American society? In the hands of eminent historian Laura F. Edwards, these textiles tell a revealing story of ordinary people and how they made use of their material goods’ economic and legal value in the period between the Revolution and the Civil War.

Read: Only the Clothes on Her Back

Fulvia: Playing for Power at the End of the Roman Republic by Celia E. Schultz

Fulvia is the first full-length biography focused solely on Fulvia, daughter of Sempronia and Bambalio, who is best known as the wife of Marcus Antonius (Mark Antony). It peels away the heavily biased accounts of her to reveal a strong-willed, independent woman who was, by many traditional measures, a successful Roman matron.

The Voices of Nîmes: Women, Sex, and Marriage in Reformation Languedoc by Suzannah Lipscomb

For the most part, we cannot hear the voices of ordinary French women—but this study allows us to do so. Based on the evidence of 1,200 cases brought before the consistories—or moral courts—of the Huguenot church of Languedoc between 1561 and 1615, The Voices of Nimes allows us to access ordinary women’s everyday lives: their speech, behaviour, and attitudes relating to love, faith, and marriage, as well as friendship and sex.

Read: The Voices of Nîmes, now new in paperback.

Elizabeth Stuart is one the most misrepresented—and underestimated—figures of the seventeenth century. Labelled a spendthrift more interested in the theatre and her pet monkeys than politics or her children, and long pitied as “The Winter Queen,” the direct ancestor of Elizabeth II was widely misunderstood. Nadine Akkerman’s biography reveals an altogether different woman, painting a vivid picture of a queen forged in the white heat of European conflict.

The Secret Listener: An Ingenue in Mao’s Court by Yuan-tsung Chen

A first-hand account of what life was like in the period before the revolution and in Mao’s China, The Secret Listener gives a unique perspective on the era, and Chen’s vantage point provides us with a new perspective on the Maoist regime-one of the most radical political experiments in modern history and a force that genuinely changed the world.

Sisterhood and After: An Oral History of the UK Women’s Liberation Movement, 1968-present by Margaretta Jolly

This ground-breaking history of the UK Women’s Liberation Movement shows why and how feminism’s “second wave” mobilized to demand not just equality but social and gender transformation. Oral history testimonies power the work, tracing the arc of a feminist life from 1950s girlhoods to late life activism today. Peppered with personal stories, the book casts new light on feminist critiques of society and on the lives of prominent and grassroots activists.

Read: Sisterhood and After, now new in paperback.