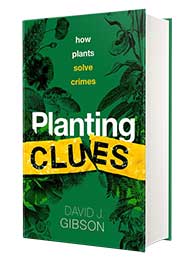 Can plants solve crimes? It’s been known for a long time that botanical evidence has forensic value. Back in the 1930s, Edmond Locard, the “father of forensics,” reported how a single seed of a rare species of dandelion caught up on the jacket of a murder suspect placed him at the scene of the crime. Locard had observed the plant growing next to the body. This sort of plant trace evidence is more valuable than ever today in forensic investigations and can include microscopic materials from plant seeds, pollen, spores, and their DNA.

Indeed, exciting recent advances allowing the detection and sequencing of minute amounts of DNA are providing new tools for conservation biologists and forensic scientists. Specifically, the detection of environmental DNA (eDNA) in water, air, dust, or soil samples can be used to identify the presence of plants, animals, and microbes that can’t be otherwise easily observed. Organisms shed their DNA into the environment as skin particles, cells, and liquids, even while still alive. When these DNA fragments are sequenced they can be matched to DNA sequences from known organisms in eDNA reference libraries providing an identification. Even when comparison sequences from named organisms are unavailable, as they are for many microbes, the number of unique eDNA sequences can provide a biodiversity estimate. As noted by environmental scientist Eric Larson at the University of Illinois, this approach has value in the detection of hard to observe or cryptic organisms, such as rare species. Levels of biodiversity can be estimated with important conservation implications, especially in light of climate change that is threatening natural ecosystems.

“Exciting recent advances allowing the detection and sequencing of minute amounts of DNA are providing new tools for conservation biologists and forensic scientists.”

eDNA technology allows improved identification of traditionally surveyed organisms used in forensic examination of trace evidence (e.g., pollen and fungal spores, or even fragments of plant tissues). The method provides opportunities to characterize the microbial fungal and bacterial components of samples. One exciting avenue that has been proposed by Sarah Ishak at the Université de Sherbrooke is the characterization of the leaf phyllosphere (microbial fungi that grow on plants surfaces such as leaves) associated with trace evidence samples. These fungi may be unique to the plants from the location and environment that they grew in providing an “assignment capacity,” i.e., crucial links to crime scenes. Amaury Frank at Ghent University takes this idea a step further proposing that plant eDNA in soil samples can be used to identify specific vegetation communities from where a sample originated.

The promise of forensic eDNA

Does eDNA sampling have forensic value in criminal or civil cases? Forensic botanist Mark Spencer certainly thinks so suggesting its value in the geolocation of crime scenes, clandestine burials, and providing a means to improve “traditional” linking of suspects to victims. Proof-of-concept tests by Fabian Roger at Zurich University and James Comolli at MIT of dust samples collected from the air have shown that eDNA screening from objects of evidentiary value, such as clothing, vehicles, or instruments, could be used to estimate their geographic point of origin. Plant eDNA in the soil on the sole of a suspect’s shoe could be traced back to unique vegetation at a crime scene.

The identification of microbes, determined via their eDNA, has forensic applications in minimum post-mortem interval (PMI) estimation, human suspect identification (though transfer of bacteria to surfaces), and toxicology cases (by identifying microbes involved with toxin degradation).

Forensic eDNA applications are few at present but are likely to increase as the approach becomes more widespread and is introduced into the court system. Standardisation of the methodology and wider development of DNA databases is needed to ensure that results of eDNA applications are consistent, scientifically reliable, and valid so that they can accepted into evidence.

A pioneering forensic eDNA involved Asian carp in 2010. Biologists in Chicago were concerned that the opening of dams and weirs in the Chicago Area Waterways System (CAWS) would allow Asian carp to migrate up from the Mississippi River Basin into Lake Michigan. Asian carp are a hugely problematic exotic fish that reduce biodiversity of native fish in waterways. These large fish jump out of the water into boats injuring people (imagine being hit in the head by a 100 lb fish!). eDNA testing carried out by the US Army Corps of Engineers supported anecdotal sightings that live Asian carp were likely present in the CAWS indicating that at least some fish were close to Lake Michigan.

The US State of Michigan and five partner plaintiffs brought action against the Army Corps of Engineers to require the building of a hydrological barrier between the lake and the basin to stop the spread of Asian Carp. The eDNA evidence was a critical part of the forensic evidence considered by the court even though the case was dismissed as the plaintiffs did not demonstrate the Corps failure to abate a public nuisance (i.e. presence of Asian carp in the Great Lakes).

So, can we use plants to solve crimes? When Edmond Locard introduced his Exchange Principle in 1920, he emphasized the forensic value of materials identified in “les poussières organiques” (organic dust) to link suspects to victims and crime scenes. Over 100 years later, the examination of forensic trace evidence through eDNA testing is poised to take a step forward that he likely never imagined.

David J. Gibson is Professor of Plant Biology and University Distinguished Scholar at Southern Illinois University Carbondale. He is Senior Editor of the Journal of Ecology, and author of a number of books, including Planting Clues: How Plants Solve Crimes (2022), Grasslands and Climate Change (2019, with J. A. Newman), Methods in Comparative Plant Population Ecology, 2nd edition (2015) and Grasses and Grassland Ecology (2009).