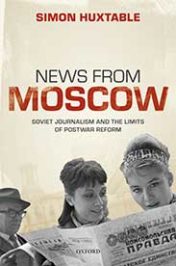 News from Moscow: Soviet Journalism and the Limits of Postwar Reform

“As Vladimir Putin’s leadership enters its third decade, time will tell whether the despair of the current generation will be replaced by a renewed sense of journalism’s power to effect change.” That was how I ended the epilogue of News From Moscow, my monograph on post-war journalism in the Soviet Union. When I wrote those words, the situation for Russian journalists was already dire: journalists who contradicted the Kremlin line were regularly harassed, and independent publications were forced to register as “foreign agents.” But Russia’s full-scale invasion of Ukraine on 24 February has made a bad situation immeasurably worse. Sooner than expected, the dismal future of Russian journalism is becoming clearer.

“Russia’s full-scale invasion of Ukraine on 24 February has made a bad situation immeasurably worse.”

The intensification of the so-called “special military operation” became a pretext for a crackdown on independent media across Russia. Officials threatened to prosecute those who described events in Ukraine as a war, while the state’s media watchdog Roskomnadzor blocked access to the websites of many independent outlets. As a result, the Russian news landscape has become a state-controlled landscape, with news outlets including Meduza and Mediazona only accessible through a VPN. Staples of the liberal 1990s, such as the radio station Ekho Moskvy and the newspaper Novaia gazeta closed their doors in March, having been threatened by Roskomnadzor. The latter’s editor, Dmitri Muratov, was attacked with red paint on a train to Samara, an assault which underlines the dangerous conditions for anti-war journalists, who now face 10-15 years in jail for disseminating “fake news.”

When, in June 2021, Muratov was awarded the Nobel Prize, the committee’s statement mentioned the newspaper’s “fundamentally critical attitude towards power” as well as its “fact-based journalism and professional integrity.” But how can journalists working within the Russian mediascape maintain their integrity in a climate that seems to mitigate against truth, and which calls for moral compromises rather than ethical principles?

For some Russian journalists, the invasion presents an opportunity. Russian television now offers a ready platform for various regime loyalists, nationalists, and conspiracists to launder their pet theories, including Vladimir Solovyov, a media pundit famous for his increasingly-deranged rants on Channel One. For others, the invasion became the straw that broke the camel’s back. State media was hit with a stream of resignations, while most of the non-Russian staff who had run the various versions of RT, the Russian state’s foreign broadcasting arm, rapidly jumped ship. The most high-profile act of dissent was the protest of Maria Ovsyannikova, an editor on the Channel One news, who famously crashed the channel’s evening news broadcast carrying an anti-war banner. Ovsyannikova was feted by western media and subsequently accepted a post with the German newspaper Die Welt. That decision was met with consternation from journalists and activists, who wondered why Ovsyannikova, who had for many years worked to disseminate the Kremlin’s narrative, had suddenly become a poster child for dissent.

“Are journalists automatically tainted by association with a discredited regime or can they point to positive actions they had taken to mitigate its impact?”

These discussions of complicity recall debates taking place after 1991, at which point journalists were understandably keen to deflect accusations of having been Soviet propagandists. They raise a wider question about journalism in authoritarian conditions: are journalists automatically tainted by association with a discredited regime, or can they point to positive actions they had taken to mitigate its impact?

I am sometimes asked about parallels between the present-day Russian journalism and the press of the Soviet era: are we back in the USSR? The journalists at Dozhd’ suggested as much when they broadcast footage of Swan Lake in March, an allusion to Soviet TV broadcasts of the ballet during emergencies. One must, however, acknowledge the differences: independent media in the Soviet Union ended with the Decree on the Press of 9 November 1917, which effectively mandated the closure of all non-Bolshevik newspapers; after the Soviet collapse, it has never been illegal for journalists to start a new newspaper, nor to express opinions that differ from those of the regime. The Kremlin authorities have preferred to dismantle these freedoms piece by piece rather than with a single legislative act. The key point is that for much of the Soviet Union’s existence, journalists had no memory of the pre-1917 past, nor any expectation of being able to act independently. Today’s journalists, by contrast, are the children of Perestroika and the 1990s, and had, until recently, been able to speak truth to power. For that reason, there is a sense of loss.

Good journalism meant different things in each period. Soviet journalists were never free to contradict the Party line, nor to break important news stories, which were always approved at high levels. Journalists’ work was always tied to the overarching goal of building communism. Nevertheless, this still left them with space for creativity—especially after Stalin’s death. For journalists in the 1950s and 1960s, a period I examine in detail in my book, journalists helped popularise new pedagogical initiatives and even inaugurated the country’s first polling institute. Doing so, they hoped, would unleash untapped energies from below that would enable the building of communism. At the same time, they helped smooth the regime’s rough edges. Newspapers received thousands of letters every week, complaining of various ills of Soviet life, from a leaking roof to wrongful imprisonment. These letters became the source material for articles which could reverse a sentence, secure long-awaited housing, or expose official wrongdoing. It is this spirit of public service that allows Soviet journalists to claim that they were public servants, even if much of the material in their newspapers was geared towards the Party’s goals.

In the present day, the Kremlin’s constant attacks on independent journalists mean the hard-won freedoms of 1991 have shrunk to almost nothing. Top-level journalists at leading state broadcasters operate under constraints that recall Soviet conditions, including daily memorandums giving details of subjects to be covered and those to be avoided. The majority of journalists, who form the staff of regional television stations and newspapers, are increasingly squeezed between the requirements of their employers, their advertisers, and the demands of local politicians. In this climate, as Elisabeth Schimpfössl and Ilya Yablokov have noted, good journalism boils down to adekvatnost’: an ability to understand the “rules of the game” in the face of political and commercial restrictions and to operate effectively within those parameters.

“The disappearance of independent media will only intensify the feeling that Russian journalists are providers of propaganda and distraction.”

Adekvatnost’ could similarly describe the work of Soviet journalists who operated in a hostile political climate that severely restricted their freedom. Indeed, one of the most iconic accounts of the Soviet press came from the émigre novelist Sergei Dovlatov, whose comic novella The Compromise (1981) details the daily accommodations with authority that marred a young journalist’s career. Yet some Soviet journalists remained hopeful about the communist future and even when that future horizon receded, retained a belief that journalism could serve the public. Present-day Russian journalists, by contrast, have imbibed the Putin’s era’s trademark cynicism. The disappearance of independent media will only intensify the feeling that Russian journalists are providers of propaganda and distraction rather than contributors to the public good. Nevertheless, there remain journalists—many outside Russia, some, bravely, within it—who have continued to question the official line via Twitter, YouTube, Telegram, or blog posts. As Farida Rustamova, an exiled journalist whose Substack offers a perceptive view of Russian politics, told Meduza: “I started writing, among other things, to keep my hands and my head busy and to be of at least some use, describing what I can discover. I don’t want Russian speakers, especially in Russia, to be left alone with Putin’s propaganda”.

Simon Huxtable is Lecturer in Modern European History at Birkbeck, University of London.

Who is Putin fighting against?