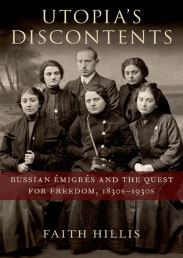 Utopia's Discontents Russian Émigrés and the Quest for Freedom, 1830s-1930s

Russian “information warfare”—from hacking to efforts to sow “fake news” abroad—has captured international headlines in recent years. Although Russian efforts to influence western opinion are usually seen as a product of the Cold War, they have a much longer lineage.

In the late nineteenth century, liberal citizens in England, France, and Switzerland regarded the Russian autocracy with horror. Consequently, they welcomed refugees from Russia with open arms, granting them extensive asylum rights regardless of the reason they had fled their homeland. Tsarist officials expressed extreme frustration that hundreds of thousands of revolutionaries and Jewish laborers had illegally emigrated from Russia and found refuge in Europe. They insisted that far from virtuous refugees, these migrants were criminals and malefactors who would sow unrest in Europe. Given the widespread sympathy that Russian émigrés had found in Europe, however, these complaints fell on deaf ears.

The first efforts to change European opinions about Russian refugees were ad hoc in nature, devised by a few self-appointed defenders of the tsarist regime. In London, Olga Novikova hosted a salon at Claridge’s hotel and published regular articles in the British press justifying Russia’s imperial mission, autocratic government, and even its brutal treatment of its Jews. In Paris, Russian nobles and French patriots associated with the salon of Juliette Adam insisted that Russia and France should overcome their political differences and combat German aggression together. This circle, which advocated its views to a broader public in Adam’s journal La Nouvelle Revue, appears to have informally cooperated with Novikova, a personal friend of Adam’s, and her group.

The first intersection between the tsarist state and these informal Russophile circles active in Europe came in the mid-1880s, when Petr Rachkovskii arrived in Paris to serve as chief of the tsarist secret police abroad. Having worked as a journalist in Russia before he joined the police, Rachkovskii was among the first tsarist officials to acknowledge and embrace the power of public opinion. A habitué of Adam’s salon, he worked to systematize its outreach efforts, founding a press agency of his own. It agents bribed the editors of prominent European newspapers to produce coverage that was friendly toward the tsarist regime and secured positions at outlets such as Le Figaro, where they produced their own pro-Russian content. The agency also produced some half-dozen books and even a work of fiction aimed at western audiences.

In working to smear the reputation of émigrés and to improve perceptions of the tsarist regime, Rachkovskii’s publicists cannily drew on anxieties that already begun to emerge from European society. Catering to emergent circles of antisemites, they portrayed the refugees (both Jews and non-Jews) as parties to a Jewish plot to destroy Europe’s cultural and political values. Pro-tsarist publicists also exploited the growing anxieties about the shortcomings of liberal regimes. Remarking on the corruption and economic inequality that plagued western democracy, they insisted that the authoritarian style of the Russian autocracy was a laudable alternative.

By the late 1880s, the effects of Russian outreach efforts were already visible on the European right. Texts of Russian provenance circulated widely among French antisemites; nativist activists in England cited work produced by Russian publicists as evidence that émigrés posed a threat to the nation’s economy and its values. In 1890, Rachkovskii made his most audacious move yet. One of his agents infiltrated a circle of émigrés in Paris, incited them to build bombs, and even supplied them with materials. Rachkovskii then alerted the French police, who swooped in and arrested the entire circle. The episode, covered widely by the press across the continent, instigated a panic about Russian émigrés, bringing many of the ideas once promoted by pro-tsarist publicists into the mainstream. Meanwhile, it improved relations between Russia and the liberal powers, convincing politicians once hesitant to cooperate with their Russian counterparts that the tsarist regime was a potential partner in an emergent global war against terror. Over the course of the next decade, Russian émigrés faced unprecedented harassment in the form of police surveillance, extradition, and expulsion. In England, the critics of open borders who had drawn inspiration from Russian publicists succeeded in passing the Aliens Act, which limited the immigration of eastern European Jews.

The story of Russia’s nineteenth-century campaign to shape European public opinion reveals how effective information warfare can be. Over the course of just a few decades, Russian publicists succeeded in transforming European discourse about émigrés and the tsarist regime. However, the Russian campaign succeeded mostly because it built on pre-existing anxieties about terrorism and the effects of emigration and exploited evident weaknesses in liberal regimes. This lesson also applies to today’s context, in which Russian propagandists again exploit racial tensions, xenophobia, and mistrust of government for their own purposes. The best defense against information warfare is not found in the realm of international relations; instead, it begins with addressing our problems at home.

Faith Hillis is Associate Professor of Russian History at the University of Chicago. She is the author of Children of Rus': Right-Bank Ukraine and the Invention of a Nation.

To know Russia, you really have to understand 1837