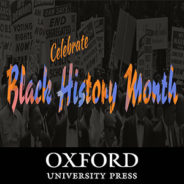 Anna J. Cooper once said: “the cause of freedom is not the cause of a race or a sect, a party or a class—it is the cause of human kind, the very birthright of humanity.”

In observance of Black History Month, we are celebrating our prize-winning authors and empowering scholarship spanning a variety of topics across African American history, the civil rights movement, Black Lives Matter, the Harlem Renaissance, jazz, and more. Explore our reading list and update your bookshelf with the most recent titles from these eminent authors.

1. The Cause of Freedom: A Concise History of African Americans by Jonathan Scott Holloway

Jonathan Scott Holloway considers how, for centuries, African Americans have fought for what the Black feminist intellectual Anna Julia Cooper called “the cause of freedom.” At a moment when political debates grapple with the nation’s obligation to acknowledge and perhaps even repair its original sin of slavery, The Cause of Freedom tells a story about our capacity and willingness to fully realize the country’s founding ideal: that all people were created equal.

2. The Movement: The African American Struggle for Civil Rights by Thomas C. Holt

Thomas C. Holt provides an informed and nuanced understanding of the origins, character, and objectives of the mid-twentieth-century freedom struggle, shining a light on the aspirations and initiatives of the ordinary people who built the grassroots movement. This groundbreaking book reinserts the critical concept of “movement” back into our image and understanding of the civil rights movement.

3. The Making of Black Lives Matter: A Brief History of an Idea, Updated Edition by Christopher J. Lebron

In this updated edition, Christopher J. Lebron presents a condensed and accessible intellectual history that traces the genesis of the ideas that have built into the #BlackLivesMatter movement. In a bid to help us make sense of the emotions, demands, and arguments of present-day activists and public thinkers, this edition includes a new introduction that explores how the movement’s core ideas have been challenged, re-affirmed, and re-imagined during the white nationalism of the Trump years, as well as a new chapter that examines the ideas and importance of Angela Davis and Amiri Baraka as significant participants in the Black Power Movement and Black Arts Movement, respectively.

4. The New Negro: The Life of Alain Locke by Jeffrey C. Stewart

Jeffrey C. Stewart offers the definitive, Pulitzer Prize- and National Book Award–winning biography of the father of the Harlem Renaissance, based on the extant primary sources of Locke’s life and on interviews with those who knew him personally. Stewart’s thought-provoking biography recreates the worlds of this illustrious, enigmatic man who, in promoting the cultural heritage of Black people, became—in the process—a New Negro himself.

5. Sweet Taste of Liberty: A True Story of Slavery and Restitution in America by W. Caleb McDaniel

The unforgettable saga of one enslaved woman’s fight for justice—and reparations—by Pulitzer Prize-winning author W. Caleb McDaniel. This book tells the epic tale of Henrietta Wood, who survived slavery twice and who achieved more than merely a moral victory over one of her oppressors. A portrait of an extraordinary individual as well as a searing reminder of the lessons of her story, this book establishes beyond question the connections between slavery and the prison system that rose in its place.

6. Straighten Up and Fly Right: The Life and Music of Nat King Cole by Will Friedwald

One of the most popular and memorable American musicians of the 20th century, Nat King Cole is remembered today as both a pianist and a singer, a feat rarely accomplished in the world of popular music. In this complete life and times biography, author Will Friedwald offers a new take on this fascinating musician, framing him first as a bandleader and then as a star. This chapter explores the musical output of the King Cole Trio in the peak years of 1943 to 1946 and breaks down the different kinds of songs they favored.

Ted Gioia’s The History of Jazz has been universally hailed as the most comprehensive and accessible history of the genre of all time. Acclaimed by jazz critics and fans alike, this magnificent work is now available in an up-to-date third edition that covers the latest developments in the jazz world and revisits virtually every aspect of the genre, bringing the often overlooked women who shaped the genre into the spotlight and tracing the recent developments that have led to an upswing of jazz in contemporary mainstream culture.

8. Play the Way You Feel: The Essential Guide to Jazz Stories on Film by Kevin Whitehead

Author and jazz critic Kevin Whitehead offers a feast for film fanatics and movie-watching jazz enthusiasts. Spanning 93 years of film history, this book is a comprehensive guide to films (and other media) from the perspective of the music itself. Explore this chapter to learn more about jazz in film, from early talkies through the birth and development of the swing era.

10. Once We Were Slaves: The Extraordinary Journey of a Multi-Racial Jewish Familyby Laura Arnold Leibman

While their affluence made them unusual, the Moses’s story represents that of a largely forgotten population: families of mixed African and Jewish ancestry, that constituted as much as 10% of the Jewish communities. This story of siblings sheds new light on the fluidity of race—as well as on the role of religion in racial shift—in the first half of the nineteenth century.