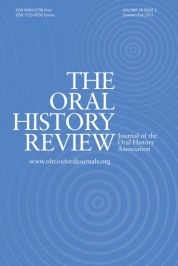 The Oral History Review, published by the Oral History Association, is the U.S. journal of record for the theory and practice of oral history. Its primary mission is to explore the nature and significance of oral history and advance understanding of the field among scholars, educators, practitioners, and the general public. Follow them on Twitter at @oralhistreview, like them on Facebook, add them to your circles on Google Plus, follow them on Tumblr, listen to them on Soundcloud, or follow their latest OUPblog posts via email or RSS to preview, learn, connect, discover, and study oral history.

With school getting back in session, today on the blog we are exploring how instructors are using oral history in the classroom. The piece below, from filmmaker and UCLA Lecturer Virginia Espino explores the power of oral history to connect students to their campus community, and to help them collaboratively rethink what working class identity means in the modern era.

What does it mean to be a member of the working class in the twenty first century? I posed this question to my students earlier this year when I taught a class in oral history methods for the Institute for Research on Labor and Employment at UCLA. I focused the course on the study and collection of working class stories as a way to uplift voices not often heard in an academic setting and to develop an archive of interviews that broadens our understanding of the working class as a diverse and multifaceted cross-section of our society.

On the first day of class I handed out index cards to each student and asked them to define working class in three words or statements. How we define terms such as “working class,” “middle class” and “upper class” exposes our belief system as well as how successful the media has been in constructing meanings for us. In order to teach working class history, I wanted to understand what the term meant to modern college students in one of the most ethnically and economically diverse cities in the country.

The responses were what I might have predicted because they were views that I shared myself:  Living paycheck-to-paycheck; struggling to survive; exploited. But as I re-read through my student’s definitions, I was reminded of my own oral history interviews with the Chicana activist, Lilia Aceves. She recalled that poverty meant something different to her growing up in 1940s East Los Angeles. She had a roof over her head and food on the table and imagined herself as well to do. “I didn’t know we were poor…I thought we had everything,” she recalled. Only as an adult did she understand that her family lacked the kind of material wealth one saw in popular magazines or on the big screen. “We always had a home, but in terms of the physical aspect of it you could see that we were the working poor.”

After the first session of class my primary teaching goal for the quarter evolved into using oral history methods to document the meaning working class individuals gave to their lives. I directed my students to enter the interviews with an open mind and to expect to have their assumptions challenged. In addition to capturing the life-history narrative I wanted them to focus on questions that explored how members of the working class understood their social and economic position. Did they view themselves as we did: poor, unskilled, and uneducated? What would they tell us about their lives if we took the time to listen? The results of their interviews were stunning, and several narratives stand out for how they help us to amplify our perception of U.S. “workers.”

Three students in the class chose to work together on an interview project that would explore the lives of three janitors in the University of California system. They developed an interview outline that would focus on the following research questions:

Each student was required to interview the same person twice in order to gain an authentic experience of the work oral historians do when approaching the life history. Returning to an interviewee for follow-up questions is the crux of a quality interview and often leads to a deeper dig into meaning and personal agency.  And for the student interviewers, it proved essential in providing them with ample time to develop trust as well as time to step back from the process for self-reflection and self-critique. The students identified as members of the working class, but soon realized they were bringing their own biases to the interview process – specifically, the assumptions they had about the people who maintain the infrastructure of UC campuses. As stated in their project evaluation, they began their project with the belief that “janitors are poor and their job has low value…” They ended their project with a new awareness that janitors take pride in their work and want to be seen and appreciated by the students, faculty and staff who work alongside them.

As a class we learned the varied meanings of working class through the projects students executed. In a surprising revelation, the students learned that one of the janitors they interviewed held a college degree: Unable to find a job in her field she was forced to take a position cleaning the UCLA campus to support her young family. Over the course of the quarter we were introduced to an Asian American student struggling to balance work and school. Her narrative forced us to reject the “model minority” stereotype that presumes Asian Americans float easily through school; her identification with the working class stemmed from her need to support herself through school, while many of her classmates receive unlimited parental support. And through an interview with a white male, we learned that the absence of jobs in the humanities has forced white college educated men to seek jobs in restaurants and department stores while struggling to maintain the lifestyle they desire. Taken together, these important narratives help us complicate what it means to be working class in the twenty first century.

Virginia Espino is a historian turned filmmaker who currently teaches oral history, Chicanx history, and Labor history at UCLA. She is a co-producer of the film No Más Bebés that examines the history of forced sterilizations at a large public hospital. Her current project is an investigation into the foster care system through the voices of those who encounter it on a daily basis.