Unlike so many words featured in this blog, bugger has a well-ascertained origin, but it belongs with the rest of this series because it sheds light on its companions beggar and bigot. The route of bugger should be familiar by now (it is the same as before): from French, to Middle Dutch, and finally, to English. A single, most ingenious, attempt to derive bugger from Greek pygé “buttocks,” with reference to katapygón “sodomite,” has been rejected for good reason: there is no way to explain how a noun popular in Classical Greek made its way into Middle English slang. At present, everybody agrees that the source of bugger is Old French bougre, which in the Middle Ages meant “heretic,” from Bulgarus “Bulgarian.” The Bulgarians were Orthodox Christians, specifically Albigensians, and various sins, including bestiality, were imputed to them. Those rumors spread and were busily cultivated in Southern Europe before, during, and after the Albigensian Crusades (1209-1229), a bloody campaign I mentioned last week in connection with beggar and Beguines. With regard to etymology, a parallel case is Cathari, another “heretical” sect. From Cathari, known in Italy as Gazari, German has Ketzer “heretic” and Dutch has ketter, for, naturally, heretics are expected to perform all kinds of abominable acts: once a deviant, always a deviant. (Incidentally, even Old French erites, from hæreticus, meant “pervert; sodomite.”) We can see that the fate of “beggars,” “buggers,” and “bigots” is part of the history of the hapless Albigensians. I’ll return to bigot next week, but those interested in what has already been on this subject are invited to read the essay “No one wants to be a bigot” (26 October 2011); they will also find some discussion of bugger there.

Today, beggar, as noted in the previous post, can be a humorous word of abuse (you little beggar). I am not sure whether such usage is a remnant of the days when beggar had not yet acquired its modern sense (hardly so!) or a mild amelioration of beggar “mendicant.” In any case, the same has happened to bugger. Even stripped of its sexual connotations, bugger can be a rude word (“rascal, scoundrel”), but in many parts of the English speaking world it functions as a rough term of affection, and you little bugger may be synonymous with you little beggar. Such semantic leaps are often hard to follow. But the phonetic proximity of beggar to bugger must have played an important role in their rapprochement.

This is what John Orr, a distinguished Romance philologist, said on a related matter. To repeat: in Old French, Medieval Latin Bulgarus became bougre, and it is from this bougre that English has bugger. However, “the field of expletive words is one in which associative tendencies that are always present in the organic development of language have their freest and fullest play, and their study is for this reason highly instructive, inasmuch as it gives us insight into processes which in normal speech are far less easy to detect.” Orr asks why among taboo words with unsavory connotations some become expletives, while others don’t. This is an important question. Etymologists have often wondered why, for example, our infamous F-word supplanted a bunch of its synonyms and even conquered the world. Apparently, it owes its good luck to its phonetic shape: the verb is short and energetic—just what one needs in this situation. Orr also suggested that bougre had an obvious advantage over erites because it is more fit for exclamatory purposes: compare French boo!, Engl. bah!, and their likes. I think he was right and that there is much more to say about the makeup of interjections. But at the moment, let us look at the etymology of the French expletive.

Some people may know the archaic English preposition maugre “in spite of.” It goes back to Anglo-Norman maugré, literally “bad pleasure,” a compound (no longer felt to be such) meaning “bad pleasure” (mal– and grace). The phrase maugré Dieu! “Goddamn!” became a curse in French, so much so that the verb maugréer turned into a synonym of “to swear.” For euphemistic purposes it was replaced with bongré Dieu! (bon– “good” for mau– “bad”), and this bongré developed regularly into bougre. Once in circulation, it entered into contact, merged with, and “enriched” the much older bougre, the word that was borrowed into English as bugger. Romance etymology is not my area, and I can have no independent opinion about the origin of French words. I have done so before and decided to stay away from other people’s turf (once bit, twice shy), but in my unprofessional view, Orr’s hypothesis of two sources of Old French bougre looks acceptable. Even if he erred, his approach to expletives and slang is fruitful.

Bougre had a long history in Europe and was also in vogue in eighteenth- and nineteenth-century Germany. In Northern Germany, it had some currency in the form bögger. It seems that, wherever it took root, its spread was facilitated by its expressive sound form. This leads me to the idea that, although each of the three nouns—beggar, bugger, and bigot—had an individual history, their popularity depends partly on the sound symbolic notion that words of this type belong together and mean something bad.

Two and a half years ago, while examining the etymology of bigot, I did not realize the connection. Yet I did notice how close bigot and bugger were. Now I think I can say more about this subject. It was the history of the verb bicker (see a recent post on it) that made me renew the search. I have also read some works that I did not know then. When one is busy writing an etymological dictionary, one is well-advised to finish the entire work and then send it to print, rather than publicizing it piecemeal, because with every next entry one learns something new about the previous ones. Bicker leads to beggar, beggar to bugger, and bugger to bigot. But then one may die (perish) before publishing anything. Next week I will return to bigot and close this miniseries. 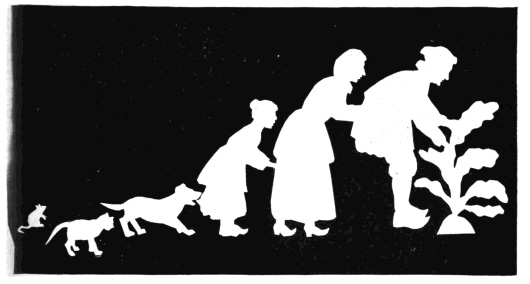 There is a Russian folktale called “The Turnip” (“Repka”). Once such a gigantic turnip grew in the field that the farmer was unable to pull it out. He called his wife to come to the vegetable patch; yet the recalcitrant turnip did not budge. The old woman asked their daughter to assist them—still no result. Then their granddaughter was sent for, but it took the additional efforts of a cat and a mouse to complete the task. This is how one succeeds in solving the riddle of some “immovable” words: beggar after bicker, bugger after beggar, bigot after bugger, and the work is done. Enjoy the picture.