Respectability in etymology is determined by age: the older, the better. The verb to bicker has been known since the fourteenth century, while the verb to bitch “complain; spoil” is a nineteenth-century invention. On the other hand, the noun bitch occurred already in Old English, so that it is not quite clear which of the two words—bitch or bicker—should be awarded the first place. Be that as it may, I am interested in bicker, a verb of poorly understood origin. I have written about it before but never accorded it a post in this blog. Also, my “definitive” theory is new.

Skinner, the author of the 1671 etymological dictionary of English, offered numerous sensible conjectures. He wondered whether bicker goes back to Welsh bicra “fight” (he wrote bicre) or the verb pickeer, which he may have understood as “fight with pikes.” This verb meant “skirmish, maraud” and surfaced later than bicker. Yet Skinner’s idea was sound, as was his suggestion that a native origin of bicker looks more attractive. The Welsh etymon holds out little promise (the same is true of Macckay’s Irish beuc ~ beic “roar, bellow,” which he cited alongside becra), because the origin of bicra has not been ascertained with sufficient clarity, and tracing one obscure word to another equally obscure one is a procedure never to be recommended. For a long time it was taken for granted that if a hard English word resembles a similar word in Irish, Welsh, or Cornish, the path must have been from Celtic to English, and Macckay even believed that most of English vocabulary developed from Irish roots. Later the opposite, equally extreme, view prevailed (only from English to Irish and Welsh). Today we prefer to investigate the claims of each candidate for the etymon individually. All things considered, it appears that Welsh bicra “fight” is a borrowing of English bicker “skirmish,” rather than the other way around.

However, a dogmatic reference to Welsh remained unchanged for two centuries. One can still find it in the 1890 edition of Webster. A more realistic hypothesis connected bicker with such English words as pick, peck, and beak. Some such verbs and nouns have close counterparts in French and elsewhere in the Romance languages. Others don’t and have never been accounted for. Why, for instance, peak and pine? To complicate matters, pick and peck can be sound imitative formations in which nothing prevents initial p from alternating with b. The woodpecker goes peck-peck-peck, and perhaps this is what we really hear, though perhaps it is a product of our imagination (Russian speakers hear took-took-took, while Germans say toi-toi-toi, for example, when “touching or knocking on wood”).

For a long time I thought that bicker should be connected with bitch, because bickering resembles yelping at one another. Inasmuch as this idea had not occurred to anyone else, I felt very proud of it. I was partly supported in my reconstruction by the onomatopoeic Russian verb laiat’ “to bark.” Its reflexive form laiat’sia (literally, “to bark at one another”) means “to exchange insults; bicker” and nothing else. The late coining of Engl. bitch “complain” seemed to confirm my guess. The Old English for bitch was bicce. As happens to many words for “dog,” the origin of bicce poses problems, but they can be ignored in the present context. From a semantic point of view, the derivation of bicker from bicce leaves nothing to be desired: bickering can be easily understood as another sort of bitching.

But doubts beset me with regard to phonetics. Bicce was pronounced with what is technically known as palatalized k. Try to say something like bikkye (incidentally, the Icelandic cognate of bicce is bikkja), but without –y-, and you will get a notion of what palatalized k means. In English, this k later turned into ch; hence bitch (never mind t before ch: which and witch have the same final consonant, and so do bitch and beach). Just how early the change of palatalized k to ch happened is a matter of debate. In the English-speaking world, students are taught to pronounce bicce as bitche, which I think is wrong. But even if the change happened in Middle rather than Old English, it occurred before the verb bicker came into existence (unless it was current very much earlier than the time of its first attestation; this is possible but cannot be proved). Given my etymology, bicker should have been bitcher. So I reluctantly gave up my “insight” (nowadays, even the humblest of us have only insights and visions).

Tracing bicker directly to pick, peak, pike, peck, and their likes fails to explain its meaning. To be sure, the suffix –er produces frequentative and iterative verbs (chatter, clatter, fritter, and so forth), but bickering does not convey the idea of continual fighting, pecking, or picking; that is, bicker is not a remote synonym for nag. Bickering requires two actors. Long ago, Dutch bikken “cut, chip a stone” was cited in connection with Engl. bicker. It has cognates in Old and Middle High German but does not shed new light on the English verb, for we have already seen pick, beak, and the rest. However, close to it stands Dutch bikkelen “to play with bickelstenen,” that is, “play with knucklebones” or “jacks.” 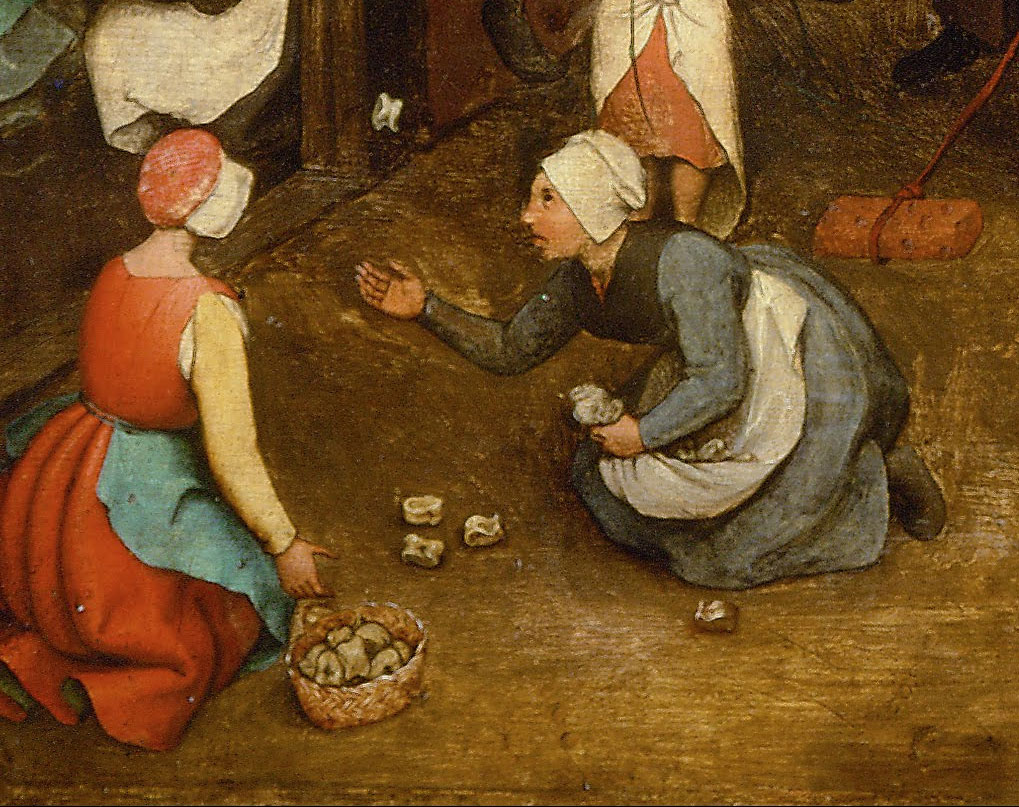 Here we find ourselves witnessing the game of bones, which was called bickelspil in Middle High German. This would not have taken us too far, but for one word in Tristan by the great Middle High German poet Gottfried von Strassburg. In his survey of the contemporary literary scene (the early thirteenth century), he speaks disparagingly about a poet (or perhaps the poet) who expects to win a laurel wreath by jumping merrily, hare-like, over the word heath and resorting to bickelworte (plural). Bickelwort has never been explained in a satisfactory way, though no one doubts that a gamester’s term is meant. Most probably, Gottfried alluded to the vulgar blabbering of the canaille, as opposed to the lofty diction of poets, whose art appealed to “noble hearts.” Such gamesters, he implied, play, while hurling swear words at one another, and resort to low slang. They bicker.

So I suspect that Engl. bicker is an import from Middle High German or rather from the Low Countries. It must have been a slang word, initially associated with the type of exchange or behavior one could hear and see in a tavern, where people played bones or dice, fought, and bandied words, not always of the friendliest type, as we too know from the way games of chance are played. This etymology answers our main questions. It explains why bickering needs more than one party and why its linguistic register is and has always been low. In the beginning, Engl. bicker meant “skirmish, small altercation.” This is exactly what one could expect.

The verb denoting “chip; cut with a pointed weapon” may have been sound imitative or borrowed from French. When dealing with such words, one never knows where they originated. “Make throws” developed from “cut with precision; engrave” and was appropriated by players at bones and dice. In German and Dutch, the suffix of iterative and frequentative verbs is –eln. In English, it was regularly replaced with –er. It left its initial sphere and acquired broader implications, though perhaps we are missing some of its original uses. Today, when people bicker, they only exchange venomous words. Gottfried’s bickelworte shows that this meaning was already known in the verb’s homeland.

If anybody knew how sorry I am to let my sleeping bitch rest in peace!