It is hard to hide something (anything) from Stephen Goranson (see his comment to Part 1), who will find a needle in a haystack, and The Canterville Ghost is a rather visible needle. Yet Oscar Wilde is no longer as popular as one could wish for. The scandal that ruined his life is remembered better than his works. Only his three or four society dramas and perhaps The Happy Prince are recognized by many. The Canterville Ghost is one of the most delightful tales written in English, and my goal was to encourage the world (doesn’t the whole world follow this blog?) to read or reread it.

The cautious findings of last week can be summarized as follows. The English word deuce is, rather certainly, a borrowing of Low (that is, northern) German duus (Standard German Daus). In German it surfaced about five centuries ago but reached England considerably later. Deus is not an alteration of Latin deus “God” or of Latin diabolus “devil,” and, though it sounds like Dutch droes “devil” (with which it rhymes), we have no way of showing “beyond reasonable doubt” that this similarity is more than a coincidence. The name of the merciless Roman general Claudius Drusus has hardly anything to do with droes. Gallo-Roman dusius “demon” looks like a perfect etymon of German duus, but dusius was recorded a millennium before duus and never again, so that one wonders what underground existence it could have led for such a long time.

Soon after the previous post appeared I was asked about the term Gallo-Roman. In this context it can be translated loosely as “a Latinized Celtic form.” Last time I mentioned Elmar Seebold, who considers a connection between dusius and German Daus probable. Joshua Whatmough (1897-1964), an expert in the dialects of Ancient Gaul, also thought that duus (he seems to have known only Westphalian dus) might have been of Celtic origin. With all due respect to such eminent authorities, I would prefer to leave the putative Celtic etymon of the German word in limbo. The Scandinavian origin of deuce, defended by Wedgwood (but proposed long before him), should, in my opinion, be disregarded.

At present, the widely recognized etymology of deuce stems from the OED. I will quote a version of it from The Century Dictionary, with the abbreviations expanded:

“As ‘the deuce’ was the lowest throw [at dice], the phrase, uttered in vexation, seems to have come to be accepted as an equivalent to ‘the plague,’ ‘the mischief’, and with a little more emphasis, to ‘the devil’, with which the alliteration would readily associate it. Like other words used in colloquial imprecation, deuce has lost definite meaning, and has been subjected (in Low German, German, and Scandinavian) to more or less wilful [sic] variation with other words. Cf. Low German de duks!, equivalent to Engl. the dickens!, Low German dücker, deuker, deiker, ‘the deuce’.”

I quoted Charles P. G. Scott of The Century Dictionary because etymological devilry was one of his favorite subjects and, unlike so many others, he never repeated Murray’s opinions unthinkingly. At the beginning of the entry, he mentioned Dutch droes and Low German droos. Apparently, he considered them to be alterations of duus. Scott’s passing reference to the Scandinavian forms has not been developed, and it is unclear what he meant. Tuss ~ tusse ~ tosse seem to belong to a different group of words. Skeat eventually subscribed to Murray’s etymology, but Seebold (under German Daus) did not. (For the record: deuce “two at dice or cards” is from Old French deus, now spelled deux, from Latin duos “two.”) 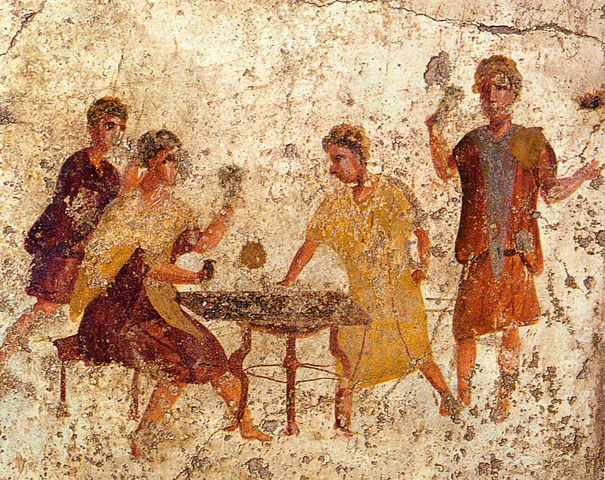 Murray never had bad ideas, and his derivation of deuce is excellent. However, it can hardly be called final, even considering the fact that not too many etymologies are ever “final.” For example, the earliest form may have been druus, with duus going back to druus that had lost its r, rather than duus picking up r along the way (but to my mind, this is an unlikely scenario). While leafing through English dictionaries, one encounters dowse “to strike in the face,” dowse “to immerse; use as the divining rod,” dowse “to extinguish,” doze, as in bulldoze/bulldozer, in which it meant “to strike, whack, whip” (a doublet of dowse), and doze “sleep lightly.” Dizzy is also close by. The vocabulary is full of d-s/z words belonging to the “low register” of speech. Transplanted to English, duus found itself in good company.

Low German, Dutch, and Frisian have as many d-s/z verbs as does English, but there, in addition to the rarer meaning “strike,” we find references to madness (“dizziness”). The earliest recorded English quote in the OED has the phrase a deuce on you (with the indefinite article!), while the Germans, at least today, say ei Daus! (with the interjections preceding Daus). Those “curses” sound like fie upon you. Could it be that duus originated as an almost meaningless word with negative connotations? Something called duus was bad, and passing it on to a neighbor might have grave consequences (compare the plague on both your houses), in English perhaps not quite the same as in German.

Next on our agenda is doozy, a vague denomination of something extraordinary (“awesome”?). The word has been around since the beginning of the twentieth century. There is hardly any literature on it, and two of the three conjectures on its origin I have been able to find sound like a joke: doozy as an alteration of daisy or of the name of the great Italian actress Eleonora Duse (1858-1924). A third conjecture derives doozy from deuce. But though deuce has been attested with several spelling variants (deuse, duce, dewce, dewse, dooce, and doose), it does not seem to have ever had -z- in it. Probably doozy is not from deuce.

I have only a general idea of how doozy might come about. The syllable do, perhaps under the influence of do–do, is an ideal component of slang words (compare dude). The syllable –zy, regardless of how it is spelled, often carries humorous or slightly negative connotations: compare dizzy, tizzy, fuzzy-wuzzy, hussy ~ huzzy, crazy, sleazy, and so forth. Monosyllables like jizz, fizz, and whizz, to say nothing of jazz, belong here too. In some British dialects, the diminutive of boy is boysie (no connection with the cricketing term bosie), and, since I have already mentioned Oscar Wilde today, I may say that Lord Alfred Douglas, his disreputable boon companion and lover, was universally known as Bosie, for this is what his mother once called him (“boysie, little boy”), and it is to “Dear Bosie” that De Profundis was addressed. I would like to venture the hypothesis that doozy is made up of dooo! followed by the pseudo-suffix –zy—an expression of amazement (almost an interjection).

Floozy is contemporaneous with doozy. There are periods in the history of languages when nonsensical rhyming words suddenly begin to proliferate. Even if, as the OED suggests, floozy goes back to flossy (Victorian slang for “shining, ostentatious”), its final shape, with the vowel –oo– in the middle and -zy at the end, makes one think that the word as we today know it, owes something to sound symbolism. All this is guesswork. Alas, it is so easy (ee-zi) to foozle an etymology and bamboozle the readership. You say to yourself: “My post on floozy is a doozy,” only to realize that after two weeks of profound meditation you are almost exactly where you were on Day One. There is only one comfort: “Lots of people act well, but very few people talk well, which shows that talking is much the more difficult thing of the two, and much the finer thing also.” I concur. Anyone can now find the source of this maxim.

Subscribe to the OUPblog via email or RSS.
Subscribe to only language articles on the OUPblog via email or RSS.
Image credit: Dice players. Roman fresco from the Osteria della Via di Mercurio (VI 10,1.19, room b) in Pompeii. Filippo Coarelli (ed.): Pompeji. Hirmer, München 2002, ISBN 3-7774-9530-1, p. 146. Photo by WolfgangRieger, 15 March 2009. Public domain via Wikimedia Commons.