Simpleton is an irritating word. At first sight, its origin contains no secrets: simple + ton. And that may be all there is to it despite the obscurity of –ton. We find this explanation in the OED and in the dictionaries dependent on it. The word surfaced in the middle of the seventeenth century and must have been a facetious coinage, but we are not sure in what milieu it turned up, and quite often the etymologists’ biggest trouble is their ignorance of the initial environment of a new term. The earliest attestation sometimes misleads the researcher, because a popular word need not have been first recorded in its “cradle.” If we knew more about the center of dissemination of hobo, kibosh, and their likes, we might be able to offer truly persuasive hypotheses of their origin and discard others as untenable. Those who have read my posts on chestnut, masher, and dude will easily recognize the problem. Who were the wits responsible for launching simpleton, and why did it catch on? Samuel Johnson (1755) offered a piece of relevant information in that he called simpleton a low word. He often used this label and apparently knew what he was saying. We can assume that in his days simpleton was slang, cant (which is much worse than slang despite the horror stories told about slang at that time), or a dialectal word not fit for polite use.

The Oxford Dictionary of English Etymology, while expanding the entry in the original edition of the OED, states that –ton in simpleton is the same –ton we have in family names derived from place names and cites a few parallels. The names present no trouble. Newton, Hilton, Dayton, Clinton, and many others immediately spring to mind. Some of them are transparent (for instance, Newton = new + town), and Hilton needs only another t to clarify it (the family name Hillton, from hill + town, also exists). The oldest sense of town was “enclosure,” as in German Zaun, and “the space enclosed,” as in Icelandic tún. By contrast, Clinton is opaque, for Clin- requires an explanation.  The little-known word idleton “idle person” and the obsolete sillyton, along with words ending in by (idleby, sneaksby, and so forth; by, from Scandinavian, also signifies “town”), are supposed to bolster the explanation in the OED. However, idleton and sillyton arose later than simpleton and could have been modeled on it.

Of special interest is the word skimmington, which predates simpleton in the OED by forty-one years. Its best-known meaning refers to a frontispiece of 1639: “A burlesque procession formerly held in ridicule of a henpecked husband; a cavalcade headed by a person on horseback representing the wife, with another representing the husband seated behind her, facing the horse’s tail and holding a distaff, while the woman belabored him with a ladle” (The Century Dictionary; “supposed to have originated in the name of some forgotten scold” [!]). The OED, with reference to the ladle in the picture, tentatively derived the word from skimmer + ton. Ernest Weekley also cited lushington “drunkard,” but this word was a jocular nineteenth-century creation, this time indeed from a family name, containing an allusion to lush. It sheds no light on simpleton.

In 1882 the first edition of Skeat’s English etymological dictionary was published. His opinion on simpleton, as it appeared there, never changed. According to Skeat, simpleton is simple-t-on, with a double French suffix, from Old French simplet “a simple person” (-on, without the preceding diminutive suffix t, can be seen in Spanish simplón “simpleton,” and another word with a double suffix is musketoon, that is, musk-et-oon; –oon, as in spittoon, saloon, etc.). Our “thick” dictionaries are divided in their judgment: most follow the OED, while a few side with Skeat. Other derivations of simpleton do not explain –ton and are not worth mentioning—except perhaps one.

Abram Smythe Palmer, the author of a popular book on folk etymology, quoted the following lines from a satirical 1772 poem: “This fashion, who does e’er pursue,/ I think a simple-tony;/ For he’s a fool, say what you will,/ Who is  a macaroni.” Tony, it appears, was not a rare name for “any person.” Simpleton, Smythe Palmer suggested, was short for Simple–tony, as babe is short for baby. It did not occur to him that simple-tony could have been a witty alternation of simpleton. Skeat did not comment on this idea, but he disliked complex etymologies when an easy one solved the riddle (though his etymology is not particularly easy).

Smythe Palmer’s conjecture is ingenious. Yet it can hardly be upheld despite phrases like any tony and to be pointed at any tony that he unearthed. Any tony probably belongs with Tom, Dick and Harry (incidentally, also a seventeenth-century creation), and, even if simpleton could go back to some such collocation, it would still be desirable to find a common origin for all the –ton words, especially for skimmington, and assuming (just assuming) that skimmington predates simpleton, the tony idea falls to the ground. As far as we can judge, in the seventeenth century, which was a great age for slang, words ending in –ton spread among “the lower orders,” and this pseudo-suffix attached itself to a small number of nouns, of which today most speakers of English still remember only simpleton. When that happened, the –ton words merged with place and family names ending in –ton, and the origin of the “first formation” was lost.

This returns us to the question of the milieu. If the –ton words sprang up in the streets, the French etymology that Skeat favored has little to recommend it. But it could be a word coined in a dialect with a strong admixture of the Romance element. Frank Chance discussed French singleton in 1883, a year after the publication of Skeat’s dictionary. He pointed out that, according to the best authorities, singleton “a single card in a suit” or at least its root, had come to French from English, and ended his article thus: “If the word singleton arose in French, it is odd that the French should have added a French termination to an English word; but if the word was originally English, it is equally odd that the English should have added on the French termination (e)ton. They seem, however, to have done this in simpleton; at least, no record is before us of the word’s ever having existed in French.” Whatever the peregrinations of singleton may have been, the French provenance of –ton in simpleton cannot be considered proven.

Also in 1883 F. C. Birkbeck Terry, another active contributor to Notes and Queries, expressed his hope that “[t]he compilers to the great English dictionary, of which we shall soon have the first instalment [sic], will no doubt be able to supply examples of the use of the word antecedent to 1720.” He was right. The first installment appeared in 1884, and a citation with an earlier date was supplied. But the word’s origin proved to be less simple than one could expect or wish for. 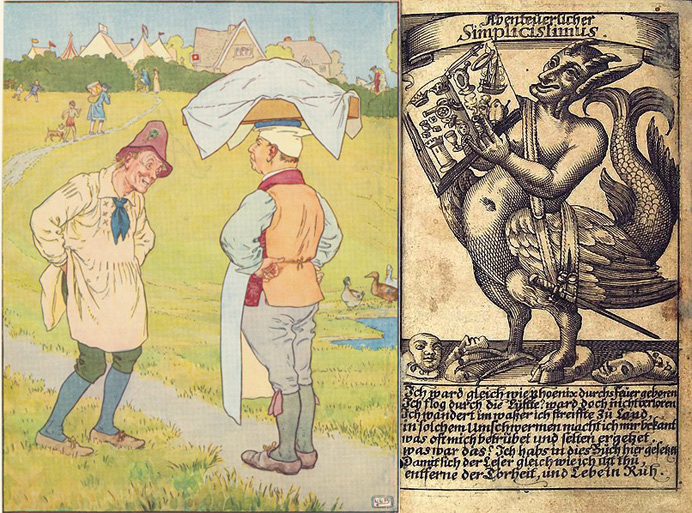 The first picture will remind you of Simple Simon, that proto-simpleton of English folklore and a close relative of Simple Tony, though the poem about him and the pieman again goes back to the seventeenth century. The second will reintroduce you to Simpicissimus, the superlative of simpleton (as it were) and the hero of a famous seventeenth-century German book by Hans Jakob Chr. Von Grimmelshausen.

Anatoly Liberman is the author of Word Origins And How We Know Them as well as An Analytic Dictionary of English Etymology: An Introduction. His column on word origins, The Oxford Etymologist, appears on the OUPblog each Wednesday. Send your etymology question to him care of [email protected]; he’ll do his best to avoid responding with “origin unknown.”

CORRECTION (12 September 2013): Amended the date of Samuel Johnson to 1755 from 1775. Seventeenth-century German book, not eighteenth.