I borrowed the title of this post from an ad for an alcoholic beverage whose taste remains unknown to me. The picture shows two sparsely clad very young females sitting in a bar on both sides of a decently dressed but bewildered youngster. I assume their age allows all three characters to drink legally and as much as they want. My concern is not with their thirst but with the word dude. After all, this blog is about the origin of nouns, verbs, and adjectives, rather than the early stages of alcoholism.

My experience confirms the observations of several people who have published on dude: it has become an all-purpose form of address among young men. Surveys show that college age women also use it, but my notes contain no examples. In future, dude may develop like guy. You guys is now unisex; one day, you dudes may become equally “cool.” A very full overview of the history of dude can be found in the journal Comments on Etymology 23/1, 1993, 1-46. Not surprisingly, the origin of dude is unknown. Monosyllables beginning and ending with b, d, g (and even with p, t, k) are the dregs of etymology. Consider bob, bib, gig, gag, and tit (exchange tit for tat if you care). I believe that kick is a borrowing from Scandinavian, but its Icelandic etymon is merely “expressive” and shares common ground with bib, bob, and their ilk.

Dude is a member of a small but happy family: dod “cut off, lop, shear,” dud, duds, and dad. Only did has an ancestry any word can be proud of; the same is partly true of agog, but then agog is not a monosyllable. The OED (in an entry first published in 1897) called dude a factitious slang term. This statement inspired a rebuff from one of our best experts in the history of slang: “There is not a shred of evidence that dude arose factitiously, i.e., somehow artificially. OED simply should have said: ‘Origin unknown’.” Yet a non-artificial origin of dude is hard to come by. I never miss an opportunity to refer to Frank Chance and Charles P.G. Scott, the etymologist for The Century Dictionary, a sadly underquoted, undercited work (among the greats only Skeat seems to have recognized its value). This is what Scott wrote about dude:

“A slang term which has been the subject of much discussion. It first became known in colloquial and newspaper use at the time of the so-called ‘esthetic’ movement in dress and manners in 1882-3. The term has no antecedent record, and is prob. one of the spontaneous products of popular slang. There is no known way, even in slang etymology, of ‘deriving’ the term, in the sense used, from duds (formerly sometimes spelled dudes…), clothes in the sense of ‘fine clothes’; and the connection, though apparently natural, is highly improbable.”

It will be seen that Scott and the OED had a similar attitude toward dude.

Perhaps both the OED’s editor James A.H. Murray and Scott were right. Yet one point should be made in connection with their opinion. The history of slang words deserves as much attention as that of more genteel words. Quite often even good dictionaries, in the etymological parts of their entries, confine themselves to the “explanation” slang, as though saying that a word had at one time was “low” sheds light on its origin. Spontaneous generation is a common process in lexis. Hundreds of words are sound symbolic or obey the stimuli we are unable to pinpoint. Many others were slang at one time but have been “ameliorated” (from rags to riches); historical linguists have not shied away from discussing them. Thus, in the eyes of an etymologist the fact of dude being slang is not a stigma. Fuddy-duddy and dodder are as interesting as hodden “the coarse woolen cloth of farmhands’ dress” or the humble hodmandod “snail.” And yet dude might have been a mere “sound gesture,” as German scholars called such expressive formations.

The hypotheses on the origin of dude are not particularly interesting. Some of them are remembered only because Skeat took part in the discussion. He suggested that dude was an abbreviation of Low German dudenkop “blockhead” (kop = Kopf “head”); the simplex German Dude has also been attested with the same meaning. Another putative etymon suggested for dude is Portuguese doudo, a dialectal form of doido “simpleton, fool.” As a parallel, fop has been cited: the word combines the senses “fool” (the predominant early sense) and “one wearing flashy clothes.” German Dude and Dudenkop never meant “an overdressed person,” and this makes Skeat’s derivation less persuasive. His first note on the subject goes back to 1900; the Portuguese hypothesis circulated even earlier.

A fanciful etymology connected dude with one of the preterit forms of do. Another bizarre guess had it that at one time New York dandies greeted one another with “How dew you dew?” A few letter writers thought that dude has ties with the name of the now extinct dodo. Such wild suggestions have gone a long way toward fostering the opinion that etymology is a pursuit worthy only of the stupidest dudes (duds). A serious scholar wondered whether dude is a borrowing (via American Spanish) of Arabic dud “worm, caterpillar.” Attempts to derive dude from doodle are also on record.

Dude appears to be an Americanism coined in New York City, and that is why it may have been brought to the New World by immigrants. However, the existence of dude in British dialects cannot be ruled out. Thomas Hardy’s novel Jude the Obscure appeared in 1895. Since the British pronunciation of du- is very often ju- (“Have you paid the jews yet?” That is, dues, not Jews), dude, which became known in England almost at once, was pronounced jude. Did Hardy intend a pun? Jude was modest and unassuming, a simple-hearted dude, obedient to its creator’s agenda.

For the fun of it, I will reproduce a passage ascribing the invention of dude to the famous American businessman Hermann Oelrichs:

“The simple fact is that Mr. Oelrichs, who is distinguished by a deep contempt for effeminacy in either dress or manner, sat one day at a window gazing out on Fifth Avenue. Along came a very much overdressed youth, with so mincing a gait, that involuntarily one of the clubmen with Mr. Oelrichs [the Union Club is meant] began humming an accompaniment to the step, thus: ‘du, da, de, du-du, du, de du’. ‘That’s good!’ said Mr. Oelrichs; ‘it ought to be called a dude’. And dude it has been called ever since.”

This was printed in 1889, in Oelrich’s lifetime. If this story is true, dude was indeed a “factitious” slang term, but such anecdotes are almost never true. 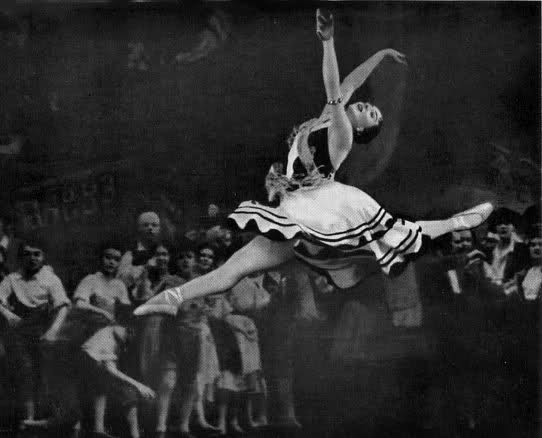 Last week I illustrated the story of balderdash with Balda, a Russian fool. This time our subject has been a New York fool. To break the trend, look at an early photo of the late Natalia Dudinskaya (stress on the second syllable), a great Russian dancer. This image will bring my Russian picture gallery to a close. The root of the ballerina’s name is dud-, as in duda (stress on the second syllable: doo’dah) “pipe,” an onomatopoeia, like German tuten “to toot”, German duden-, which we have seen in Dudenkop, as well as Engl. toot and, arguably, tut-tut. The existence of such words sheds a dim sidelight on the English noun dude, possibly a word of the same plebian descent.