In our enlightened age, we are beginning to forget how thickly the world of our ancestors was populated by imps and devils. Shakespeare still felt at home among them, would have recognized Grimalkin, and, as noted in a recent post, knew the charm aroint thee, which scared away witches. Flibbertigibbet (a member of a sizable family in King Lear), the wily Rumpelstilzchen, and their kin have names that are sometimes hard to decipher, a fact of which Rumpelstilzchen was fully aware. For some reason, devils, at least in English, are often called old: Old Bogey, Old Scratch, Old Nick, and even Old Nick Bogey…. Bogey was my subject two weeks ago, Scratch has respectable Germanic siblings (probably also onomatopoeic), and Nick seems transparent. But who was Nick? This question has bothered numerous researchers.

Did Nick at any time refer to some person (real or mythic) or does the name go back to Engl. nicker “a water sprite”? In Old English, nicor was a sea monster, and Beowulf met many of them while swimming through the ocean. However, nicker is a word only folklorists today recognize easily, whereas Old Nick is still familiar to many. Some people even think that nickname (from an eke name “additional name”; eke as in eke out one’s salary, related to German auch “also” and so forth) is really Nick name, given intentionally to hoodwink the Devil: confused by a wrong name, the one not given at birth, the Devil will not fetch his victim. More than one etymologist suspected that Old Nick “nicks” (kills) people, that is, cuts them; leaves a notch in them; has something to do with their necks, or taunts them (compare German necken “tease”).

A truly bizarre etymology of Old Nick connects Nick with Niccolò Machiavelli. As Macaulay observed, while the Church of Rome pronounced Machiavelli’s works accursed, Englishmen coined out of his surname an epithet for a knave and of his Christian name a synonym for the Devil. Fortunately, he admitted the existence of a schism on this subject among antiquarians and philologists, but it is odd that he could mention such a conjecture as worthy of anyone’s attention. The OED discusses the Old Nick and Machiavelli theory. Samuel Butler, the author of Hudibras, wrote: “Nick Machiavel had ne’er a trick,/ Though he gave his name to our Old Nick,/ But was below the least of these” (III.1: 1313). Hudibras, a long mock-heroic satire by Samuel Butler (not to be confused with another Samuel Butler, the author of The Way of All Flesh, Erewhon, and other clever but moderately entertaining books), was published in three parts between 1663 and 1678. The Machiavellian etymology of Old Nick must have been widely popular in the middle of the seventeenth century for the collocation surfaced in print just around that time. One should always count on a period during which a joke or slang leads an underground existence before it turns up in a written text, but if Old Nick had long existed before 1678 in what we today call oral tradition, it would probably have left some traces in legends, charms, or songs. The earliest citation of Old Nick in the OED is dated to 1643.

A fairly recent hypothesis derives Old Nick from Old Iniquity, the name of the devil in medieval plays. The derivation is clever, and the OED mentions it in a noncommittal way, but it is one of several equally ingenious guesses. Charles P. G. Scott, the etymologist for The Century Dictionary, wrote a book-length article titled “The Devil and his Imps.” At one time, he remarked, the name Nicol was very common (compare Nicolson). That Nicol could be abbreviated to Nick requires no proof. But Nick also served as the “nickname” for Hick (from mine Hick, in the same way in which Ned developed from mine Ed). As a result (so Scott), it aligned itself with Dick (the root of Dickens; compare what the Dickens!), Hob, Rob, Jack (with the lantern), Will (with the wisp), and the devil Hick, to cite a few. In Scott’s words: “In considering the application of the name Nick thus derived, and of other familiar personal names, to the Devil, we are not to think of that personage as the black malignant theological spirit of evil, but rather as a goblin of limited powers, a ‘poor’ devil, who may be half daunted, half placated, by a little friendly impudence or homely familiarity.” Curiously, not a hint of this hypothesis can be found in The Century Dictionary.

Scott was an excellent etymologist, neglected by later scholarship and most undeservedly forgotten. He denied any connection between Nick and Old Engl. nicor, though this connection was taken for granted by all earlier sources, including the first edition of Skeat’s dictionary (1882). Here the OED (in 1907) followed Scott, and once the OED made its opinion known, everybody repeated it. Skeat, too, gave up his initial idea. We don’t know whether the name Old Nick is considerably older than the seventeenth century or roughly contemporaneous with the sixteen-forties. As I said, the first scenario is unlikely. However, serious scholars have at least twice tried to discover echoes of ancient superstitions in Old Nick. According to a medieval legend, a certain man called Nicola pesce (Italian pesce “fish”) could live many days under water and plunge to the bottom of the sea. Popular belief turned this person into a sea demon—hence, allegedly, Norwegian Mikkelfisk, from the unattested Nickelfisch. In it n is said to have become m under the influence of the Scandinavian word for “great” (as in Scots mickle), and confusion with St. Michael was the result. Elsewhere, the fabulous sea dweller was confused with St. Nicholas. We can see that Johann Knobloch, the author of this reconstruction, also does without Old Engl. nicor but in a way different from Scott’s. 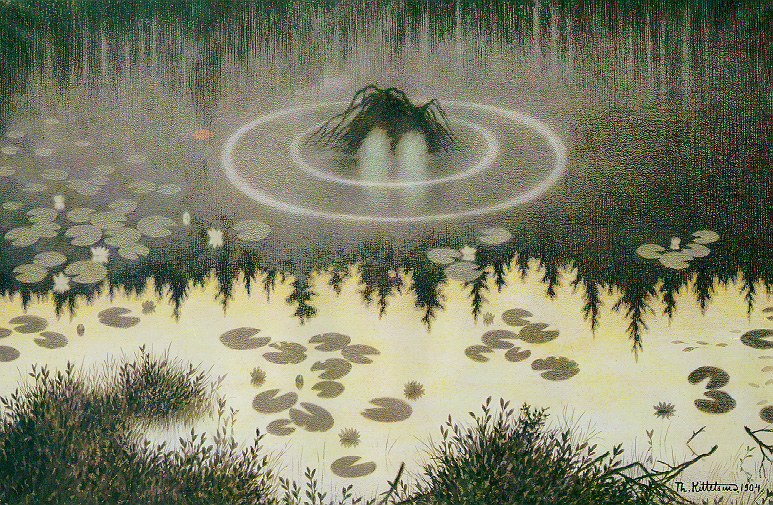 Unlike Scott and Knobloch, Claude Lecouteux returned to nicor and the words related to it. In Germany, nicchus ~ nihhus (now Nix ~ Nixe) meant “crocodile.” Lecouteux suggested that St. Nicholas, whose cult spread in the eleventh century, was venerated for encountering and vanquishing a sea monster (a nihhus) and became inseparable from him. He pointed out that St. Nicholas has strong ties with water. Quite often the saint appears in legend accompanied by a frightening figure, seemingly a transformation of his old adversary. This theory has a grave flaw. Beowulf killed Grendel (another water demon) and his mother, while St. George killed the dragon, but we do not have a story in which St. Nicholas confronts the nihhus. One would have expected that such a story would have become the kernel of his cult.

As far as I can judge, all the conjectures briefly mentioned above are wrong. My bitter experience has taught me that an etymologist never knows enough. Certain facts look convincing, as has happened with Old Nick, but there is one more that ruins the reconstruction. Neck, necken, to nick, “Nick” Machiavelli, nicor ~ nihhus (nicker), Old Iniquity, Hick, the amphibian Nicola pesce, the indomitable St. Nicholas— some of them had at least some chance of becoming Old Nick, while others had none. Sometimes the decisive factor in offering a good derivation is chronology. Why did Old Nick turn up only in the seventeenth century? The scholars and amateurs who dealt with our “poor devil” never asked this question and missed a crucial piece of information. What is it? But here, Scheherazade-like, I will stop, to return to my fairy tale next week (not next night).