Petty devils are all around us. Products of so-called low mythology, they often have impenetrable names. (Higher mythology deals with gods, yet their names are often equally opaque!) Some such evil creatures have appeared, figuratively speaking, the day before yesterday, but that does not prevent them from hiding their origin with envious dexterity (after all, they are imps). A famous evader is gremlin. It has the same “suffix” as goblin, and quite probably borrowed –lin from its ancestor. The “ancestor” is known to have caused mischief already in the twelfth century, while the word gremlin surfaced in the Royal Air Force (RAF) around 1920. It may seem strange that we don’t know the derivation of such a recent coinage, but such is the fate of all slang; our acquaintance may have come up with a catchword and never boasted of it. As a result, dictionaries say ruefully: “Origin unknown.” Is gremlin a grim goblin (that is, a slightly altered blend) or a witty variant of Kremlin (a place responsible for all kinds of trouble)? Since this is anybody’s guess and moreover, since gremlin also means (or meant) a low-ranking air pilot, we will leave Mr./Ms. Anybody at their guessing game and turn to goblin. 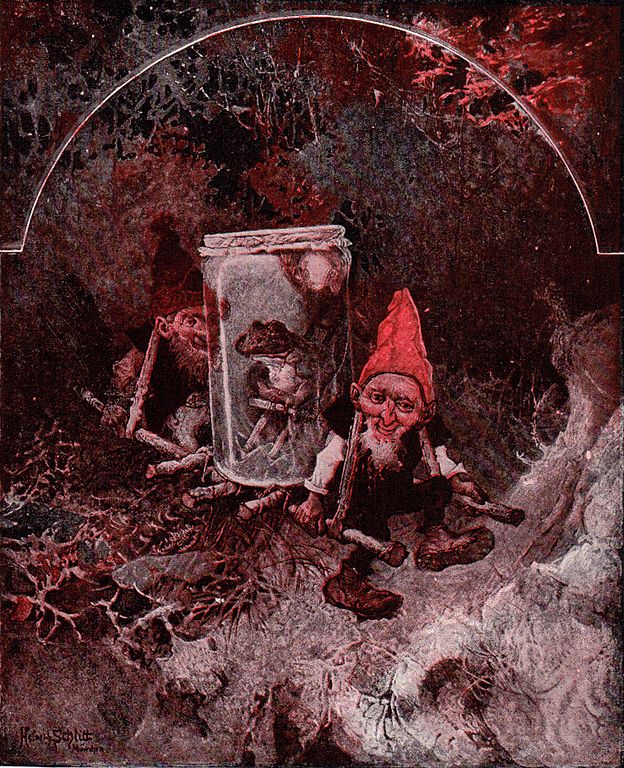 The names of demons often fall victim to taboo. People believed that, if they pronounced goblin (to give one example), the creature would mistake the speech act for an invitation and come, but if the sounds were scrambled, the danger would be averted (obviously, if you said Kid, no one called Dick would appear). See the post on Old Nick. It once occurred to me that goblin was really boglin, with gob for bog, as in bogey, and an obscure diminutive suffix. However, I gave up this idea, because –lin kept vexing me. The diminutive suffix is –in; -l belongs to the root. Later I learned that I had a predecessor who launched the same hypothesis in 1953. This is the reward or punishment for having a good etymological database. You always discover that, however imaginative you may be, you are not the first. Nothing like having someone to prick your vanity.

As always, people have tried to derive goblin from some similar-sounding word: gobble or French gober “swallow, gulp down” (though goblins are not cannibals and do not devour their victims) and even gibberish (though the resemblance is slight, and goblins do not have a reputation for obsessive chattering). According to the funniest theory, elves and goblins go back to Guelphs and Ghibellines, the names of two political parties that divided Italy during the Middle Ages, when the Pope and the Holy Roman Empire were at daggers drawn. The author of this etymology was E.K., the otherwise anonymous glosser of Edmund Spenser, the author of Fairie Queene. Before that great poem he published Shepheardes Calender (1579), and in the commentary on “June Eclogue” E.K. tells us that elves and goblins were invented to keep the common people in ignorance:

“When all Italy was distraicte into factions of the Guelfs and the Gibelins, being two famous houses in Florence, the name began through their great mischiefs and many outrages, to be so odious, or rather dreadful… that if theyr children at any time were frowarde and wanton, they would say to them that the Guelfs and the Gibeline came. Which words nowe from them… be come into our usage, and, for Guelfs and Gibelines, we say Elfes and Goblins….”

James f. Royster (1928), of the University of North Carolina, suspected (quite rightly, I believe) that E.K. had borrowed his etymology from an earlier authority but failed to find the source. This etymology received a mention in two great seventeenth-century dictionaries (Minsheu’s and Skinner’s), and to my amazement, I found it in a British encyclopedia published less than a hundred and fifty years ago.

We have only one firmly established fact at our disposal. Orderic Vitalis (1075-1142), an English chronicler and Benedectine monk, gave an account of a certain demon called Gobelinus (that is, Gobelin; –us is merely a Latin ending), expelled from a neighboring temple in Normandy. It follows that the English probably borrowed the word from northern French. We would like to know how the French obtained it. A similar word is German kobold “brownie,” a house spirit and a gnome that haunts mines (I mentioned it in connection with nickel, while dealing with Old Nick). Its origin is also unclear, and consequently, we remain in the dark as to its affinity with goblin. Perhaps kob-old consists of a word for “hut; dwelling,” with the second part meaning “ruler” or “spirit” (two candidates have been proposed). But perhaps this interpretation is a clever folk etymology. We also have Medieval Latin cobalus “mountain spirit.” The route might be from Germanic or simply German to Medieval Latin, to northern French, and from there to English. In this well-designed itinerary, a small point seems to have been overlooked, namely the absence of –d or -t in the English word. Whatever the ultimate origin of –bold — in Old Engl. cofgodas or cofgodu, plural (cof “chamber,” god “deity”) and in German Kobold — d is present but in goblin it is not. Only once have I run across a puzzled query about the loss of d in Gobelinus ~ goblin. Yet this question strikes me as important.

From early on, etymologies have cited Greek kóbalos “an impudent rogue, an arrant knave” (the plural Kóbaloi meant “a set of mischievous goblins, invoked by rogues”) and derived goblin from it. However, in later dictionaries, including the 1910 edition of Skeat, who followed the OED, the idea of the Germanic origin goblin has prevailed. I see little advantage in the Greek etymology. The truth will, of necessity, remain hidden, but goblin looks like a migratory name of a malicious hideous sprite. In Greek, the word is usually believed to be of Phrygian origin, though its relatedness to the root for “vault, arch” (verb) has also been considered. (Kóbalos emerged as “the spirit of the cave,” a rather fanciful reconstruction.) Its way to the rest of Europe cannot be traced, for Medieval Latin cobalus has no known etymon in Classical Latin. Orderic’s Gobel–in is fairly close to kóbal–os, while Old English cof-god is not.

If German kobold goes back to kob–walt or kob–hulth, it has nothing to do with the Greek form but resembles (somewhat) the Old English one. To be sure, one can suggest that not the entire Greek word but only its root caught the imagination of the oldest Germanic speakers and that to this root, reinterpreted as “chamber; dwelling,” they added their own words meaning “god; ruler; spirit.” Cob is such a common syllable in the languages of the world that its association with some other word can always be expected. For instance, when we hear Welsh coblyn “goblin,” from English, cobio “thump” comes to mind (as in coblyn y coed “woodpecker”). On the other hand, Old Engl. cof–god– may, like its German analog, have been independent of the migratory word I posited. Then goblin owes nothing to Germanic. I don’t know the answer but would like our most authoritative dictionaries to be less dogmatic when it comes to dealing with such a sly creature. Too bad lexicographers have not invited Harry Potter as a consultant.

Gobelin, a national establishment in Paris, celebrated for its tapestry and upholstery, goes back to the family named Gobelin. The existence of such a forbidding surname need not surprise us; compare the German family names Teufel, Düwel (both mean “devil”), and Waldteufel (= forest devil). In hobgoblin, hob- is a variant of Rob, Robert being a common name of the devil (compare Robin good fellow). The whole has a particularly good ring, because hob– rhymes with gob-.

Subscribe to Anatoly Liberman’s weekly etymology posts via email or RSS.
Subscribe to the OUPblog via email or RSS.
Image credit: “The Goblins in the Gold-Mine” The Book of Knowledge, The Children’s Encyclopedia, Edited by Arthur Mee and Holland Thompson, Ph. D., Vol II, Copyright 1912, The Grolier Society of New York. Public domain via Wikimedia Commons.