As always, I am grateful to our correspondents for their questions, suggestions, and corrections. Occasionally I do not respond to their queries because I have nothing to say and keep trying to find a quotable answer.

Spelling reform.
I have received a few comments on why English spelling remains frozen despite so many attempts to defrost it and proposals for changing the situation. Some people find the existing spelling rational, but the time it takes to learn to write (right, rite, wright) English tells a different story. All the objections to “the thaw” have been raised and met many times. Therefore, I find academic discussion of spelling reform unproductive. To my mind, the only thing worth the trouble is reaching out to the public. There was a time when men were supposed, even expected, to smoke. Today they are advised to refrain from smoking, and lo and behold, smoking (the smell of alcohol and tobacco that turned on the females of Jack London’s generation) is no longer a sign of masculinity. Moreover, smokers know that they are doing something wrong. By contrast, a smoking woman was a shocking oddity. But once women decided that they would not allow anyone to tell them what to do, they became the main consumers of cigarettes (“You’ve come a long way, baby.” Right?). Such is the pressure of public opinion. To convince the world that English spelling should be reformed, the support of influential politicians is needed. It may be hard to agree on the implementation of the reform (because there is no consensus on where to begin and how far to go), but at least the movement will reach a stage of practical work. At the moment, most of us preach to the choir, and the choir is disjointed and pretty small. If someone has a plan in addition to what has come to be called a vision, will you kindly share it?

Goths and other tribal names.
The origin of tribal and ethnic names is sometimes transparent and sometimes nearly beyond reconstruction. Occasionally, it becomes a bone of contention. Two classic examples are Rus and Slav. Every time historical linguistics begins to serve politics it finds itself in hot water. Can Slav be related to slave? (Incidentally, a most doubtful etymology.) Is Rus a Swedish word of possibly Finnish origin? Entire historical schools have arisen around such controversies. Tribes often call themselves by such names as “all people,” “free people,” and “our own people.” They may emphasize their warlike qualities (“people of the ax”) or refer to some place name. The origin of the word Goth has not been clarified to everyone’s satisfaction. Several other names sound similar, for instance, Gauts (Beowulf was a Gaut). In this context, place names like Gotland and –götland suggest themselves at once. The ancient form of Goth seems to have been Got– (not Goth-), and perhaps the Goths were the people of some area called Got-, whatever its origin. Fortunately, the Goths are extinct, and no one’s feelings can be hurt, whatever the solution of the problem. Even more puzzling than the etymology of Goth is the fact that one of the most powerful tribal unions of the Middle Ages has been assimilated so completely and so quickly.

If you will.
For a long time I have been collecting examples of the if you will pay your debts, you will be able to move on. Those are sentences without the slightest touch of modality, that is, the implied meaning is not “will you oblige us by paying your debts?” If you will opens purely conditional sentences (unless we start with the supposition that every time we see will in such constructions, it has a modal coloring, but reasoning so dooms us to a vicious circle), despite the rule that English conditional and temporal clauses don’t need an auxiliary verb of the future. One of our correspondents suggested that when in place of will would have made the sentence grammatical. I doubt it. When you come back, give me a call, not when you will come. I have no theory, but the ancient rule (no will in conditional clauses) seems to be slowly but steadily losing ground. Perhaps the modal sense of if you will influenced the traditional usage. In this blog, I have often referred to the occurrence of would in sentences in which I can sense no modality (he says that he would arrive much later). It is probably a phenomenon of a similar type. Such inconspicuous changes in syntax are among the most elusive ones for a contemporary observer.

Raining cats and dogs.
In my fairly recent post on the etymology of rain, I reminded our readers of a rational explanation of the idiom it is raining cats and dogs. John Larsson and John Cowan cited parallels from the Scandinavian languages and Welsh. It appears that many people liken streams of water falling from the sky to sharp nails, spikes, and rods. (See the examples in the comments.) It would be interesting to find out whether the speakers of northern Europe arrived at this image independently. Parallel development is quite possible but need not be taken for granted, because idioms and words are borrowed equally often. Especially curious is the German idiom es regnet Schusterjungen, in which Schusterjungen (literally, “shoemaker’s apprentices”) may have had the figurative sense of “studs” Danish has det regner skomagerdrenge (skomager-drenge) (ned), an analog of Shuster-jungen. However, I have been unable to find confirmation of the implied sense of skomagerdreng and Schusterjunge “stud.” The Grimms’ dictionary says relatively little on this idiom. The great Danish dictionary is more informative. It cites Swedish and Norwegian parallels and refers to some literature. But obviously, the idea that shoemakers’ apprentices used to walk especially often in the rain is nonsense.

Some adjectives to be avoided.
A friend of our blog sent me an attachment to the article from “An Irishman’s Diary” on why certain adjectives are the enemy of meaning (it was Voltaire who called them this). Among such enemies we find not only the buzzwords to be avoided (naturally, like the plague) but also the useless adjectives that add sham ceremony to the statement without clarifying its message. One of them is iconic, trodden to death (it is paste, not a diamond: despise it). Another one is significant, as in significant benefits (how significant, in what respect?). Considerable is no better. Stay away from Orwellian and Kafkaesque. All of us can probably cite many more such pretentious, pompous words whose only purport is to suggest that the speaker is a well-read person. The most “significant benefit” of a good education is the ability not to flaunt it.

Tidbits.
(1) The meaning of the abbreviation lb. It goes back to Latin libra, part of the phrase libra pondo “a pound of weight.” I have checked the available information on the Internet and found it fully reliable (all the commentators say the same).
(2) Hobgoblin. Hob is a well-known name of the devil (one of many), so that hobgoblin means something like “devil-devil”—a tautological compound in which the first element reinforces the second. The word was a particularly lucky find because hob rhymes with gob. By contrast, the obvious association of gobbledygook is with gobble.
(3) Might as well and its synonyms. By a curious coincidence, I have received two similar questions. One of our correspondents has heard the phrase might as least, and the other might as lief, both allegedly meaning “might as well.” As far as I can judge, the first is a dialectal variant of might as well and cannot be recommended under any circumstances. The second makes sense because as lief “willingly” exists (“I would as lief go there as stay here”), but it is not a synonym of at least.
(4) Engl. harp and Latin corb-. A semantic bridge can be drawn between a woven basket and the strings of a harp. Many other words have been proposed as cognates of corb-; some of them inspire little confidence but are not improbable. I have not referred to Pierre Guiraud because so many of his ingenious etymologies are highly speculative and because in this blog, contrary to my articles and books written for specialists, I do not find it necessary to give an exhaustive survey of the literature.
(5) The flow—pluere problem. The best article on this question is, in my opinion, “Methodologisches zu fluere—fließen” by Raimund Pfister in Münchener Studien zur Sprachwissenschaft 25, 1969, 75-94.
(6) In Dutch, f and v are different phonemes. English speakers have a hard time mastering Dutch f, v, and w, so that their judgment about them should be taken with caution.
(7) Has anyone come across the word meleda (as in meleda puzzle) used in English prior to 1978? My search has not produced earlier examples, but I have no access to powerful search machines. If someone can help our correspondent, please do! 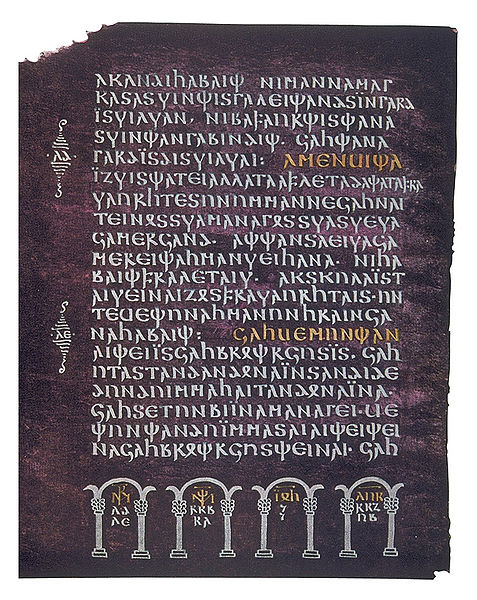 Returning to the Goths. This picture shows a page from the Codex Argenteus, the most important text in Gothic. It is a fourth-century translation of the New Testament.

Correction 5 August 2013: “However, while coining gobbledygook, Lewis Carroll must have been thinking of the word gobble.” was corrected to “By contrast, the obvious association of gobbledygook is with gobble.”