Dozens of words have not been forgotten only because Shakespeare used them. Scotch (as in scotch the snake), bare bodkin, and dozens of others would have taken their quietus and slept peacefully in the majestic graveyard of the Oxford English Dictionary but for their appearance in Shakespeare’s plays. Aroint would certainly have been unknown but for its appearance in Macbeth and King Lear. From the speech of the first witch (Macbeth III, opening scene): “A sailor’s wife had chestnuts in her lap, / And munch’d and munch’d and munch’d.—‘Give me,’ quoth I: / ‘Aroint thee, witch!’ the rump-fed ronyon cries.” And in King Lear Edgar, pretending to be mad (III. 4, 129), also says “Aroint thee.”

The origin of aroint has been the object of an intense search. In 1874 Horace H. Furness, the editor of the variorum edition of Shakespeare, knew almost everything said about the word, but he offered a dispassionate survey of opinions without comments. Very long ago, in Cheshire, rynt, roynt, and runt were recorded. Milkmaids in those quarters would say “rynt thee to a cow, when she is milked, to bid her get out of the way.” The phrase meant “stand off.” “To this the cow is so well used that even the word is sufficient.” Rynt you, witch as part of the proverbial saying rynt you, witch, said Besse Locket to her mother turned up in a provincial dictionary published in 1674, approximately sixty years after Macbeth and King >Lear were written. The lady whom Robert Nares, the author of an 1822 glossary of obscure words, consulted added: “…the cow being in this instance more learned than the commentators on Shakespeare.” The taunt missed its target: philologists are not cows, and neither the lady nor the milch cows elucidated the word’s origin. (In my experience, no one understands the word milch, and this is why I have used it here.)

The fanciful derivation of aroint as a compound from some verb for “go” and a cognate of (be)hind does not merit attention. The familiar dialectal pronunciation of jint for joint suggests that the etymological vowel in the verb rynt was oi, not i. Old English had the verb ryman “to make room,” and Skeat derived aroint from the phrase rime ta (ta = thee), imperative, “which must necessarily become rine ta (if the i be long).” I am not sure why the change was necessary, but Skeat sometimes struck with excessive force. Anyway, he reasoned along the same lines as most of his predecessors and followers, who thought that aroint meant ‘begone’. A similar idea can be observed in several attempts to find a Romance etymon of aroint.

Horne Tooke, famous, among other things, for a two-volume book EPEA PTEROENTA, Or, The Diversions of Purley (1798-1805), traced Shakespeare’s word to “ronger, rogner, royner; whence also aroynt… is a separation or discontinuity of the skin or flesh by a gnawing, eating forward, malady” (compare Italian rogna “scabies, mange” and ronyon in Macbeth, above). He obviously glossed aroint as “to be separated” and found several supporters. Other early candidates for the etymon known to me (for nearly all of which I am indebted to Furness’s notes on Macbeth and King Lear) are French arry–avant “away there, ho!”, éreinte–toi “break thy back or reins” (used as an imprecation), Latin dii te averruncent “may the devils take thee,” and Italian arranca (the imperative of arrancare “plod along, trudge”). A strong case has been made for aroint being an expected phonetic variant of anoint or acquiring in some contexts the figurative sense “thrash” (the latter derivation was defended by George Hempl, a distinguished American philologist), or because it “conveys a sense very consistent with the common account of witches, who are related to perform many supernatural acts by means of unguents.” Finally, Thomas Hearne’s Ectypa Varia ad Historiam Britannicam… (1737) contains a print in which “a devil, who is driving the damned before him, is blowing a horn with a label issuing from his mouth and the words: ‘Out, out Arongt’.” Arongt resembles aroint but its existence does not clarify the etymology of either.

The opinions, as one can see, are many, but only one conclusion is almost certain. Shakespeare, a Stratford man, knew a local word, expected his audience to understand it even in London, and used it in his plays dated to the beginning of the seventeenth century. Thus, he did not invent aroint, and the suggestion that it is his adaptation of around cannot be entertained, for how would it then have passed into popular speech in that form? As follows from the facts summarized above, in addition to witches, cows in Cheshire understood aroint thee and the phrase became proverbial in some parts of England. The milkmaids’ experience notwithstanding, it will probably not be too risky to propose that aroint thee was coined to ward off witches, damned souls, and their ilk (arongt does look identical with aroint) and that only later it spread to less ominous situations. Perhaps its origin has not been discovered because nearly everybody glossed it as “begone, disappear, stand off.” But (and this is my main point) aroint thee may have meant something like beshrew thee, fie on you. Louis Marder, in updating Furness’s Macbeth (1963), said: “The local nature, the meaning, and form of the phrase, seem all opposed to its identity with Shakespeare’s Aroint,” because ryndta! in Cheshire and Lancashire is “merely a local pronunciation of ‘round thee’= move around.” Except for having doubts about the currency of ryndta in Lancashire, OED endorsed this verdict. In my opinion, the match is quite good. Ryndta does not necessarily have to go back to round thee, while the local character of the phrase cannot be used as an argument for or against its identity with what we find in Macbeth and King Lear.

At least as early as 1784, it was suggested that aroint has something to do with rauntree, one of several variants of the tree name rowan. This tree, perhaps better known as mountain ash, is famous in myth and folklore from Ancient Greece to Scandinavia. 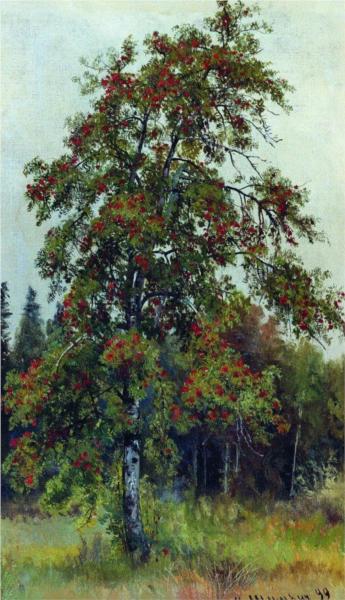 One of its alleged virtues is the ability to deter witches and protect people and cattle from evil. The great Scandinavian god Thor was once almost drowned in a river because of the wiles of a mighty giantess but threw a great stone at her, was carried ashore, caught hold of a rowan tree, and waded out of the water; hence the tree’s name “Thor’s rescue.” It would be quite natural to shout rauntree or rointree, in order to chase away a witch: on hearing the terrible word, she would be scared and flee. Rowan is a noun of Scandinavian origin (Icelandic reynir, Norwegian raun; the earliest citations in OED do not predate the middle of the fifteenth century), so that various diphthongs, including oi, developed in it. An imprecation like a raun ~ reyn to thee seems to have existed and become aroint thee. The only lexicographer who entertained a similar idea was Ernest Weekley. He wrote: “Exact meaning and origin unknown. ? Connected with dialectal rointree, rowan-tree, mountain-ash, efficacy of which against witches is often referred to in early folklore.” I take it to be the most promising hypothesis of all. The word (rowan), pronounced differently in different dialects, reached England from Scandinavia, but the curse is probably local. In any case, its Scandinavian analogs have not been found.