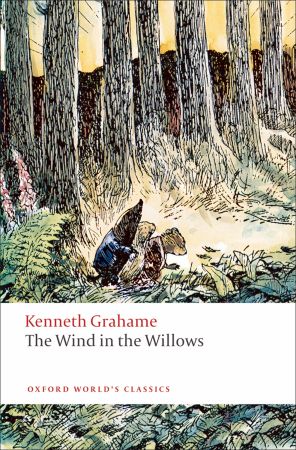 The Wind in the Willows

The greatest case of mistaken identity in literature – and what follows may well seem to some readers as verging on blasphemy!

To judge from a quick poll of friends, acquaintances, students, and the ladies in the village shop, The Wind in the Willows is fondly remembered, even by those who don’t actually remember reading it. It is a children’s book, it is about small animals – and it is somehow quintessentially English: for almost everyone I spoke to, it conjured up endless summer, boating on a quiet river, large hampers of food, a peaceful, unthreatening way of life. One or two people looked thoughtful and remembered being frightened by being lost in the wild wood, and some thought immediately of the wild and happy Toad, dashing about the lanes crashing motor cars. But for everybody, it’s a classic – a classic Children’s Book. How could it be anything else? We read it as children, we read it to children, and the hundreds of editions in print are clearly aimed at children, and live in the children’s book section of bookshops. It was even (some of my more erudite interlocutors pointed out) written for a child, and was everything that a children’s book should be – fun, safe, adventurous, and innocent. The idea that I had just produced an edition for adults was regarded as distinctly eccentric (although eccentric in a very English way, so that’s not so bad).

The trouble with all that amiable thinking is that it’s almost entirely wrong. Memory of much-loved books (or books which are somehow in the cultural bloodstream) does play tricks. For example, there are twelve chapters in The Wind in the Willows: only two are set on the river; only four are set in summer – although eight do feature copious amounts of food. (But even then we might pause: who does copious amounts of food actually appeal to? Children aren’t naturally greedy – and the kind of food on display here (fried ham, mulled ale, lobster salad, guava jelly, ‘a sausage out of which the garlic sang, some cheese which lay down and cried, and a long-necked straw-covered flask containing bottled sunshine shed and garnered on far Southern slopes.’) is not conspicuously children’s food. Even the most devoted nostalgic adult might begin to wonder whether this looks suspiciously like adult’s fantasy.

As for it being fun, safe, adventurous, and innocent…

Take ‘adventurous’. The Mole, Mr Mole (wearing a smoking-jacket) is invited onto the river by Mr Rat, a chap of independent means, a riverside house, and, Grahame himself said, ‘I strongly suspect him of a butler-valet and cook-housekeeper.’ Mole is certainly excited, in a child-like way, at this sudden opening of his narrow, underground horizons and looks out across the country: What, he wants to know, is out there…

‘Where it’s all blue and dim, and one sees what may be hills or perhaps they mayn’t, and something like the smoke of towns, or is it only cloud-drift?’

And what does his new friend say? Encouragement? Excitement? Adventurousness? That, says Mr Rat is

‘the Wide World… and that’s something that doesn’t matter, either to you or me. I’ve never been there, and I’m never going, nor you either, if you’ve got any sense at all. Don’t ever refer to it again, please. Now then! Here’s our backwater at last, where we’re going to lunch!’

Not much excitement about that – or much to appeal to adventurous children.

At the centre of the book is the Wild Wood, full of evil Stoats and Weasels and Ferrets, who terrorise the Mole when he strays into their territory, and then rise up and violently take over Toad Hall, beating the Badger and the Mole and throwing them out into the rain. Badger’s underground house is semi-fortified against intruders, there are policemen and jailors ready to quash any law-breaking, and even the most English of the characters, Mr Rat, is nearly seduced into embarking on a hedonistic trip to the lazy, wine-soaked Mediterranean.

And innocent – well, I’ll come back to that, because how innocent we think the book is rather depends on what we think it is actually about.

Let’s go back to basics: The Wind in the Willows is a children’s book – that is, a book written for children.

Well, no. It wasn’t. To begin with, neither the author nor the publisher thought it was a children’s book. Grahame was famous for books about childhood, The Golden Age and Dream Days: the publisher’s announcement described it as ‘a whimsical satire upon life’, reviewers described it as ‘an urbane exercise in irony at the expense of English character and mankind’ and Grahame himself called it ‘a book of Youth – and so perhaps chiefly for Youth,’ by which he meant those who liked an idyllic life, ‘free of problems, clean of the clash of sex…’ Which we might think, is an interesting way of putting it.

Of course, it began as a bedtime-story, and perhaps a third of it was drafted in letters to Grahame’s young son, but, as Roald Dahl said about Carroll’s Alice books: ‘I refuse to believe that Carroll wrote Alice for that little girl. It’s much too complex for that.’ Even in the letters to his son, it is clear that the book was being written for the author, not the child: many more layers were added to the original narrative.

But – wait – it’s about small furry animals (and a toad). To which I reply – show me where the characters behave as animals. On page one, Mole scrabbles with his four paws; Mr Otter, apparently an upper-class sporting gentleman, suddenly, in the middle of a pic-nic turns into a may-fly eating animal, and a bargewoman suddenly sees the distinguished land-owner, Mr Toad, as a ‘horrid, nasty, crawly toad.’ But where else on the remaining 143 pages? All the rest of the time, they are grown men, with houses, servants, cars, money, influence: of course, they are types rather than realistic characters – Toad is the spirit of rebellion, Badger the spirit if English tradition – but they are never children, and for 99% of the book, not animals.

So, what is the book actually about?

First, it’s a snapshot of a literary age. Grahame took the fashionable genres of his time and stitched them together: the boating book (there are many resemblances to Jerome K. Jerome’s Three Men in a Boat), the caravanning book, and the motor-car thriller, with nods to Gilbert and Sullivan, and a whole chapter of fin de siecle pseudo mysticism. (Quite apart from the in-jokes: Toad Hall as described in The Wind in the Willows is the same house that Henry James describes in the first chapter of Portrait of a Lady.)

Perhaps most of all, The Wind in the Willows is an allegorical self-portrait: all the main characters can be seen as facets of Grahame – the Banker seduced by the warm south, the outsider trying to become an insider, the man among men who loved messing about in boats, and male rather than female company. Literary psychologists have, of course, had a field day.

So, why the mistaken identity? The answer to that requires another blog – or a book – but it has a good deal to do with how adults relate to childhood. For much of the 20th century, childhood was seen as a place of innocence and lack of responsibility – a protected, retreatist, nurtured space, a place where you want to stay – regardless of the fact that in reality, for real children, it is pretty much the opposite. The Wind in the Willows spoke to this image of childhood, and gradually became, as A. A. Milne called it, ‘a household book’, a classic, a quintessential ‘children’s book.’ To suggest that it is not what it has always seemed to be, is upsetting for many readers who are reluctant to see an idyll violated. I don’t think they need worry – it is unlikely that the book’s status will ever change, but if adults read it as an adult’s book, they will be amply rewarded, and probably surprised.

Peter Hunt was the first specialist in Children’s Literature to be appointed full Professor of English in a British university. He has written around twenty books on the subject, together with hundreds of articles and reviews. He has also published four novels for young adults and two shorter books for young children. He the editor of the new Oxford World’s Classics edition of The Wind in the Willows, as well as the forthcoming Oxford World’s Classics edition of Treasure Island (January 2011).