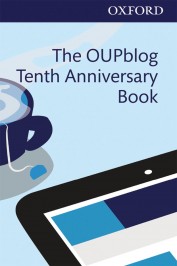 The OUPblog Tenth Anniversary Book: Ten Years of Academic Insights for the Thinking World celebrates the incisive works that made the OUPblog what it is today: an unrivaled source for sophisticated learning, understanding, and reflection.

On the tenth anniversary of OUPblog, we’ve asked past editors to reflect on their experiences and favorite memories. Today we speak to Kirsty Doole who served as OUPblog UK Editor from 2008-2012, and 2013-2014.

The OUPblog has been a part of my working life for something like eight years. These days I am mainly ‘just’ a reader, but for a long time, the blog was something I worked with on a daily basis.

I first became aware of the blog in about 2008. I was becoming interested in blogs generally and was racking up large numbers to add to my newly acquired RSS reader account. Somehow I heard that the US office of OUP had a blog, so I looked it up and started reading it. Then I started bugging my manager about whether we could get involved from the UK office. It seemed like a no-brainer to me; who wouldn’t want to get involved? She put me in touch with the then-editor Becca Ford, and the rest, as they say, is history.

My contributions were modest to begin with. For the first year or so I sourced just one blog post per week from the UK, under the moniker of the ‘UK Early Bird’, my post going up at 3.30am EST / 8.30am GMT. I spent a long time talking to people here in the UK office, telling them about the blog, and championing it as another way to get the word out about our books and products. Later, I started doing two posts per week, and then three, dropping the ‘Early Bird’ name along the way. The blog’s remit became more global, rather than being “an American thing”. There was no longer a need to distinguish where the content came from.

By the time I handed the UK reins over to Nicola Burton while I went on a period of maternity leave in January 2012, the blog made up a huge chunk of my job. When I came back a few months later, the UK input into the blog was bigger than I could have imagined. It was brilliant to see. Content was coming from all parts of the UK branch of GAB: not just academic and trade books, but medicine, law, and journals. I took over the UK editorship again for a comparatively short period in late 2013, but by then the blog, and social media more generally, needed dedicated time and energy rather than someone trying to do it alongside their normal job.

I have had a front row seat in watching the OUPblog develop and flourish over the years. I have seen it go through three different looks and formats, and I’ve contributed probably hundreds of posts through the years (I’ve even written a few…). It’s hard to choose favourites, but I’ve a serious soft spot for many of the Oxford World’s Classics posts: on The Wind in the Willows; on Anna Karenina; on The Poetic Edda; on Daniel Deronda. I’ve also learned about bumblebees in English gardens, how we came to understand Cholera, and why we eat food.

Happy tenth birthday, OUPblog, and may it continue to go from strength to strength!

Kirsty Doole has worked in the Publicity department at OUP in the UK since July 2005. She was the OUPblog UK editor from 2008-2012, and then again between late 2013 and early 2014. She is currently Senior Publicity Manager, concentrating on Oxford Dictionaries, and still reads the blog every day.