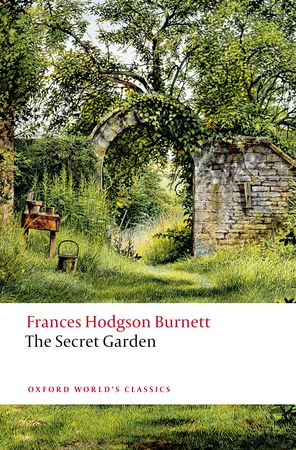 The biggest mistake made by people who want to promote ‘classic’ books is to describe them as ‘timeless’.

Of course, a book like Frances Hodgson Burnett’s The Secret Garden is timeless in the sense that it has appealed to audiences for a hundred years. When it came out in 1911, The Bookman observed that it was ‘more than a mere story of children: underlying it there is a deep vein of symbolism’;  in the 1960s it became – as Alison Lurie put it -‘something of a cult book among college and high-school students in America’ not least because it is ‘the story of two unhappy, sickly, overcivilised children who achieve health and happiness through a combination of communal gardening, mystical faith, daily exercises, encounter-group-type confrontation, and a health-food diet.’ Is ‘timelessness’, then, a function of symbols such as the garden resonating down the centuries? Gardens, as symbolic spaces of innocence, growth and regeneration, let alone sexuality, temptation and death have been with us since before Eden – and in 2006 The Ultimate Teen Book Guide described The Secret Garden as being ‘about a thoroughly cross and opinionated tweenie … who is transformed into a decent human being through finding a secret garden that is overgrown and needs a makeover (how modern is that?)’

But the fact that The Secret Garden taps into such a powerful theme does not mean that the book is not profoundly a product of its time – and for us to ignore the more immediate sources and stimuli of the book is to miss a lot of its richness. The book – like all classics – needs to be appreciated and understood in its contemporary terms if it is to be savoured.

Burnett was a garden person in an age of gardens. Gardens abound in the Pre-Raphaelite painters such as Rossetti; Tennyson’s Maud came into the garden in 1855; Stevenson used the garden as the key for his landmark collection of verses for children in 1885; gardens, forsaken and otherwise haunt Swinburne’s poems. In the world of education, Friedrich Froebel had written System of Infant Gardens in 1855, and Kindergarten play was being popularised by his followers – one of whom was Burnett. (In 1917 she was to write an introduction to a collection by the American author Kate Douglas Wiggin, author of Rebecca of Sunnybrook Farm, praising Wiggins’s ‘small documentary records of kindergarten days.’) The Baroness Marenholtz-Bülow, a Froebelite, wrote in Child and Child-Nature (1879) that ‘a child who has never called a piece of ground its own [will find it difficult] to attain the capacity for human nurture’ – and, in The Secret Garden, Mary begs for her own piece of earth and discovers how to nurture others.

More practically, Burnett had established her own rose-garden at Maytham Hall in Kent, and the seasonal structure of The Secret Garden might have been suggested by Mrs Richmond’s In My Lady’s Garden (1908), a round-the-year collection by ‘the late garden editor of the “Queen”’. Other best-sellers of the time that Burnett would have known were Elizabeth van Arnim’s Elizabeth and the German Garden (1898) – which is still in print, and two curious volumes by I. Lilias Trotter. (Perhaps not entirely coincidentally, the name of Colin’s dead mother is Lilias.) Trotter’s Parables of the Cross (1890) and Parables of the Christ-Life (1899) make the kind of links between spirituality and growing plants that Dickon and his mother make in The Secret Garden: ‘the twig must withdraw its sap from last year’s leaf, and let it flow into this year’s bud. And before the soul can really enter upon a life of holiness … a like choice must be made.’

And then there was Mrs Ewing’s children’s story Mary’s Meadow (1884), inspired by the pioneering botanist and gardener  John Parkinson (1567-1650) which was part of a fashion for ‘The Game of Earthly Paradise’ – ‘beautifying hedges and bare places’ – which became known as ‘Mary Meadowing.’ To a magpie-mind like Burnett’s this would have been an obvious connection – as perhaps was Mrs Molesworth’s An Enchanted Garden (1892) in which a wren leads the children to a deserted garden.

Put this together with Burnett’s dabbling in Theosophy, the New Thought, Christian Science and Self-Help, the rise of the Reformkleidung movement in Germany, which challenged restrictive clothing for women (presaged by Heidi – to which The Secret Garden owes its biggest scenes) and Fanny Fern’s campaign for female exercise, and we have some very time-bound elements which give ‘timeless’ themes their local habitation. Sustained by gardens then, now, and for ever, The Secret Garden is very much alive, a parable of the power of the female for an age which still needs it.

Peter Hunt was the first specialist in Children’s Literature to be appointed full Professor of English in a British university. He has written around twenty books on the subject, together with hundreds of articles and reviews. He has also published four novels for young adults and two shorter books for young children. He the editor of the new Oxford World’s Classics edition of The Secret Garden, and has previously written on The Wind in the Willows for OUPblog.