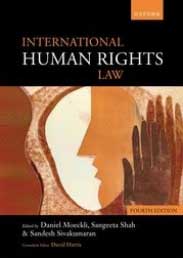 Written by leading experts in the field, this textbook explores the essentials of international human rights law, from foundational issues to substantive rights and systems of protection.

A variety of perspectives bring this subject to life, making International Human Rights Law the ideal companion for students of human rights.

With crises such as climate change and pandemics permanently on our minds, it seems a pertinent time to reflect on how these challenges impact on human rights. Specifically, it is essential to think about whether the way in which we are governed through these challenging time impacts on human rights.

International Human Rights Law 4th edition contains critical discussion by leading experts on international human rights. Its final section, aptly named “Challenges”, focuses in on the intersection between human rights and times of crises. With four excerpts from these final chapters, this blog post opens up the discussion around the impact of governing through times of strife.

A powerful justification for human rights in the anti-poverty agenda relates to the proposition that human rights define the same objective as pro-poor development, for which human development is a convenient proxy. From the capability perspective, both human development and human rights increase freedom. From the utilitarian perspective, both enhance human well-being. However, the similarity is diminished if development is defined merely in terms of growth in production and consumption of goods and services […]. Growth is desirable but not as an end in itself; it is a means towards various possible ends. If the end is the enrichment of the few at the expense of the many and of the planet, then it will not help the poor. If it is a means toward sustainable and equitable development, then it must be governed so as to reach that end. […]

Thus, the first step in clarifying in practical terms the meaning of poverty in the context of human rights is to note that pro-poor human development, like human rights, is a process that enables choices by all people to lead a life they value and, thus, enhances their well-being. Human rights are also about creating an environment in which people can develop their full potential and lead creative lives by, in the words of the [Universal Declaration of Human Rights], assuring “the dignity and worth of the human person” and promoting “social progress and better standards of life in larger freedom”. The ultimate objective of both human development and human rights is, therefore, well-being as understood in both fields. The greatest obstacle to those choices is poverty, which is both capability deprivation and a measure of the denial of human rights.

Stephen P Marks is the François-Xavier Bagnoud Professor of Health and Human Rights at the Harvard T H Chan School of Public Health, where he directs the Program on Human Rights in Development.

The pandemic has exposed the fault lines of inequality and gaps in implementation of human rights in every state irrespective of its level of wealth and development. It has revealed systemic weaknesses in investment in health and social security systems. Its impacts, whether in relation to health effects and mortality or negative economic consequences, fall disproportionately on those who already face marginalization and discrimination. Restrictions that were imposed by states to contain the public health emergency have impacted the enjoyment of a range of human rights. Furthermore, several governments have used the pandemic as a pretext to severely curtail freedom of speech, persecute critics, and roll back social, environmental, or labour rights safeguards.

“The key challenge in ensuring preparedness for pandemics is the unwillingness of governments to address longer term problems which are less visible to electorates.”

There are numerous proposals on the table for reforms to global health governance to improve the international system for pandemic preparedness and response, including the adoption of a new treaty on pandemics. However, the main lesson from the COVID-19 pandemic is not that we need entirely new international obligations but better implementation of existing obligations. Any reform process needs to engage in far greater depth with the underlying factors that have resulted in decades of lack of prioritization and compliance with obligations, particularly those related to fulfilment of economic, social, and cultural rights. […] The key challenge in ensuring preparedness for pandemics is the unwillingness of governments to address longer term problems which are less visible to electorates. […]

The economic impacts of the pandemic are likely to be felt for many years and, for the human rights legal framework to offer meaningful protection, there has to be far greater scrutiny on how governments allocate resources. This requires a systemic focus on resources and structures which determine distribution of resources both at the national and international levels, such as taxation. Lawyers and NGOs have often shied away from this area as it requires greater interdisciplinary collaboration and engagement with economic models and questions of redistribution. The pandemic has brought this challenge strongly to the fore and the nature of the response will determine whether the international human rights legal framework continues to be perceived as relevant and useful.

Meghna Abraham is a human rights lawyer and consultant who has worked with NGOs in India, UK, and Switzerland.

Particularly in the long aftermath of 9/11, governments have increasingly resorted to vague and broad definitions of terrorism. While this may have been triggered partly by a desire to respond to an unspecific threat, all too often governments intended to target individuals or groups that do not deserve to be labelled as terrorist, such as political opposition groups, radical trade unions, vocal but non-violent separatist movements, indigenous peoples, religious minorities, or even human rights defenders. The global consensus about the imperative of combating terrorism was so compelling that authoritarian governments could get away with their repressive practices whenever they renamed their opponents as “terrorists.” […]

Governments have often departed from ordinary laws, normal procedures, or the fundamental rights of the individual when confronted with acts of terrorism or the threat of them. Since 9/11, unprecedented waves of special legislation or special powers have emerged all over the world, and practically all human rights have been under attack or ‘reconsideration’. While most human rights are not absolute but allow for some limitations to protect public security, in many cases governments have gone beyond these permissible limitations, resulting in human rights violations. […]

Even if the damage to human rights triggered by the terrorist acts of 9/11 was acknowledged and the process of repairs started, any new incidents of terrorism tend to cause the pendulum to swing back again. Even where important steps have been taken to depart from human-rights-hostile practices, those lessons learned are not necessarily permanent.

“Applying a human rights lens to climate impacts has helped national courts to hold governments to account for the ambition (or lack thereof) of climate actions.”

The growing practice of applying a human rights lens to climate impacts has helped national courts to hold governments to account for the ambition (or lack thereof) of climate actions, thereby catalysing policy change that will likely have ripple effects across jurisdictions. While these are positive developments, it remains to be seen how an international climate change regime that favours national determination and contains limited avenues for the protection of substantive human rights can stabilize climate change at levels sufficient to protect human rights.

Lavanya Rajamani is a Professor of International Environmental Law at the Faculty of Law, University of Oxford, and a Yamani Fellow in Public International Law at St Peter’s College, Oxford.

If you would like to get involved in the discussion around human rights, visit @OUPLaw on Twitter for more posts during National Human Rights month.

Stephen P Marks is the François-Xavier Bagnoud Professor of Health and Human Rights at the Harvard T H Chan School of Public Health, where he directs the Program on Human Rights in Development.

Meghna Abraham is a human rights lawyer and consultant who has worked with NGOs in India, UK, and Switzerland.

Lavanya Rajamani is a Professor of International Environmental Law at the Faculty of Law, University of Oxford, and a Yamani Fellow in Public International Law at St Peter’s College, Oxford.