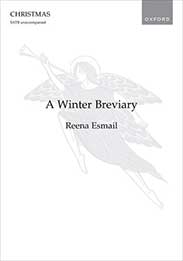 A Winter Breviary is a triptych of eco-carols with music by Reena Esmail and words by Rebecca Gayle Howell. We caught up with Rebecca to find out a bit more about the process of writing a carol text, the significance of the solstice, nature and wildlife in the story, and how she collaborated with the composer to create something that would speak to choirs of different traditions and faiths.

What is the setting of this poem?

A Winter Breviary is a triptych of carols that tells the story of a person walking in the woods on solstice night. This pilgrim—she, he, they—searches for hope, the hope they cannot name, or hear or see. And still, they walk deeper and deeper into the dark.

Solstice night is the longest night of the year. Or, as John Donne put it, “the year’s midnight.” Its lightlessness stretches out past our assumptions. On such a night, a person might feel it will never not be night again, that day is done. But the truth is, for us to awaken again to spring’s glory, the day must come to us differently. And, so it does.

In writing A Winter Breviary, Reena Esmail and I both wanted to write an interfaith celebration of these cold and holy days, something that could offer choirs of different traditions an epiphany journey toward the divinity that surrounds us all.

Can you explain the title, “A Winter Breviary”, and what each of the movement subtitles, such as “Evensong & Raag Hamsadhwani” refer to?

Time theory in Indian classical music suggests that raags (pitch frameworks) should be sung at specific times in the day. Similarly, in the Christian contemplative tradition, we find a sequence of prayers that are to be recited at specific times of day. (The latter are collected in liturgical books called breviaries.)

For more than a thousand years, across the world and often without knowing, these two spiritual traditions have met, together, in song. Both raags and canonical prayers offer a constancy that marks a life by the well-loved day; they both act as kind of clock for the soul. The story of A Winter Breviary is organized around three canonical night prayers: evensong, matins, and lauds. These same hours have corresponding raags, which organize the triptych’s music: Evensong & Raag Hamsadhwani; Matins & Raag Malkauns; Lauds & Raag Ahir Bhairav.

The image of a sparrow appears throughout the text at different moments. Can you explain the significance of this image?

I am a writer, translator, and editor of place-based literature. I want to tell stories that value our membership in the natural world, in which people learn from an earthen intelligence larger than their own. When Reena and I began our collaboration on these carols, we started asking each other what it might be like to write a series of carols celebrating the rebirth of our Earth. This is how the idea of an “eco-carol” came to be.

In A Winter Breviary, our pilgrim is joined by a house sparrow on their journey. From the very beginning of the first carol, “We Look for You (Evensong – Raag Hamsadhwani),” it’s clear the sparrow is our pilgrim’s companion, yes, but also their guide. “She looks with me, / We look for You” she is undaunted, even as the woods close in all around.

“Winter is, Winter ends, So the true bird calls”

The house sparrow is the kind of bird that most of us would not even notice—her feathers are tree bark brown, her body smaller than a person’s palm. But in this story, she is the one who knows that the Earth continues to team and turn and so do we, if we just tune ourselves to it.

In the second carol, “The Year’s Midnight (Matins – Raag Malkauns),” it’s revealed that all the Earth rejoices, by simply being. Here, the beasts pray by doing what is most natural to them in winter, by sleeping. Here, the trees pray by standing, branches raised. As the song advances, the pilgrim asks, “Hush, hush / Can I hear them? / Can I hear what is not said?” The pilgrim’s little bird, she has no need for words. She was made to fly, and so she does not falter in her flight.

What is the message at the end of the poem?

In the third carol, “The Unexpected Early Hour (Lauds – Raag Ahir Bhairav)” dawn breaks. We are rushed by bells of gratitude—“Praise be! Praise be!”—the spirit’s shock that light indeed arrives. And in the dawn, the substance of things hoped for are, surprisingly, seen: the darkness did not stop the river from flowing, it did not keep the fields from growing. The Earth’s hope and our place in it cannot be found, because it was not ever lost. Change itself is the gift.

I feel the frost’s relief

My tracks in the snow can still be erased

In us, the sun believes.

Rebecca Gayle Howell is a writer, translator, and editor of ’place-based literature.

Among her honors are the United States Artists Fellowship, the Carson McCullers Fellowship, The Sexton Prize, the Pushcart Prize, and two winter fellowships from the Fine Arts Work Center in Provincetown. Howell is the long time poetry editor of The Oxford American and an Assistant Professor of Poetry and Translation for the University of Arkansas MFA program.

Her latest release is "A Winter Breviary", written by Howell and composed by Reena Esmail, just published by Oxford University Press.

A history of the Carols for Choirs angel [gallery]