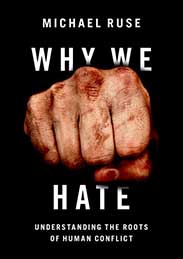 Why We Hate: Understanding the Roots of Human Conflict

An insightful and probing exploration of the contradiction between humans' enormous capacity for hatred and their evolutionary development as a social species.

Human nature is a paradox. On the one hand, thanks to our evolution in the five million years since we left the jungle, we are a highly social species. We became bipedal, making it possible for us to become hunter-gatherers. We lived in bands of about fifty, generally far from other groups. Partly cause and partly effect, our brains started to grow. We developed features helpful for living together, like language, and did not develop (or lost) features not helpful for living together, like fangs and claws. On the other hand, as the last centuries show only too well, we can be truly hateful towards our fellow human beings—on a group level, war, and on an individual level, prejudice. Two horrendous world wars show that only too clearly. As do slavery, attitudes towards Black people; the Holocaust, hostility towards Jews; and restrictions on abortion, prejudice towards women.

Why do we have these two sides to our nature? Is it possible to mold that nature so hatred is diminished? The problem started with the advent of agriculture, about ten thousand years ago. Before that, there was no war. If another band was troubling you, you just pulled up stakes and moved on. There was violence within bands—killing the chap who pinched your mate, bumping off a resource-draining grandmother—but no systematic killing of one group by another. Then, with agriculture, there was a huge population explosion—many more mouths could be fed—and increasingly moving away was no longer an option. There was nowhere empty. In any case, one had unmovable asserts–crops and so forth. Systematic violence began.

Likewise with prejudice. You might or might not like people in another group, but they didn’t really bother you. The evolutionary emphasis was on ingroup solidarity rather than outgroup hostility. With agriculture, things changed. You could not get away from others, they threatened your ingroup solidarity, and so barriers were set up against others and prejudice began. Or, it was homegrown. In hunter-gatherer times, to use a normally offensive metaphor, you could not afford to have weak sisters. Everyone had to do their bit, if not out hunting then building traps for smaller animals. Then came agriculture. Not only did you get large families, but they were adaptatively advantageous. Working in the fields, tending the animals, processing the food. Women became baby machines, occupied with having and raising children, opening the way for men to take control of the groups.

“Our present situation is not a direct function of genetic changes, from peaceful to hateful, but a consequence of changed cultural circumstances.”

The essential point to be seized from all of this is that our present situation is not a direct function of genetic changes, from peaceful to hateful, but a consequence of changed cultural circumstances. As is stressed by evolutionary psychologists Leda Cosmides and John Tooby: “Our modern skulls house a stone age mind.” Expounding: “In many cases our brains are better at solving the kinds of problems our ancestors faced on the African savannahs than they are at solving the more familiar tasks we face in a col­lege classroom or modern city.”

Is there a possibility of changing things and reducing war and prejudice? The reasons why we are in this difficulty suggest that there are ways that we can—as indeed we must—improve things. These ways will be cultural. No need for genetic reengineering. In the case of war, obviously, we need ways to avert the violence before it started. The First World War, for example, was much a function of the Kaiser and the Tsar being quite incompetent and unable to prevent their nations bumbling into conflict. The United Nations is hardly perfect but let us give it some credit. We had two world wars in the first half of the last century. We did not have a third world war in the second half.

Reducing prejudice depends on several factors. At the top of the list is increased knowledge. Africans were thought to be of inferior intelligence and that justified oppressing them. Slavery. However, evolutionary theory, backed by new techniques for ferreting out our past—the power of our knowledge about ancient DNA multiplies daily—tells us that there certainly are genetic differences between groups. Scandinavians are blond because that way they can more readily synthesize vitamin D, thanks to the sun. People of the Congo are dark, thanks to melanin, because they need protection from too much sunshine (UV radiation). But there is absolutely no reason to expect significant differences in intelligence and, given the intermixing of groups in the past thousands of years, much to lead us not to expect such differences. For all their claimed superiority to all other human beings, the English for instance are almost all (90%) descendants of intruders from the continent about 4,000 years ago—“Bell Beaker folk.” The people who built Stonehenge are not the people living around it today.

“Reducing prejudice depends on several factors. At the top of the list is increased knowledge.”

The most interesting and promising example of the way in which changes in culture can change prejudicial attitudes is with respect to women. Two factors have significantly raised their prospects. First, the advent of labor-saving devices. Around 1950, thanks to our new Bendix washing machine, my mother changed from weekends bent over the washing tub, to weekends spent reading, discussing, and writing. Second, the advent of the contraceptive pill. Suddenly, young women had as much control over their sexual lives as young men. And, very obviously, the changes have been significant. In 1965, I started teaching at the University of Guelph in Canada. One of our academic units was the Ontario Veterinary College. Back then, it had an annual intake of 80 men and a quota of four women. When I left, in 2000, the annual intake was 100 students, over 90 of whom were women. Some change is progress!

Without being Pollyannas, there is ground for optimism. Natural selection left us open for culture to make a mess of everything. Natural selection left us with the abilities to change culture for the better. No one—except perhaps hippies left over from the sixties—is arguing for a return to a hunter-gatherer life-style complete with Birkenstocks! We must show that we have the ability and will to use culture for our desired ends, rather than passively letting culture have its way, regardless of what we want or need.

The research interests of Michael Ruse, now retired but formerly the Lucyle T. Werkmeister Professor of Philosophy at Florida State University, lie in historical and philosophical questions about the life sciences, especially evolutionary theory. He has written or edited over 60 books and is the founding editor of the journal Biology and Philosophy. Recently, he has focused particularly on questions about the relationship between science and religion. He tries to steer a middle path between the fervent, literalist Christianity of many evangelicals and the no-less-fervent exhortations of the New Atheists.

Have humans always lived in a “pluriverse” of worlds?