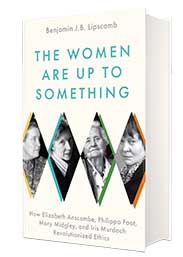 The Women Are Up To Something

In her mid-80s, Mary Midgley mused that she might never have become a philosopher if it weren’t for the extraordinary circumstances of wartime Oxford. In September 1939, one year into her university education, nearly all Britain’s men between 18 and 41 were conscripted into military service. For a few years, then, the University of Oxford was populated mostly by women.

“The effect,” Midgley wrote, “was to make it a great deal easier for a woman to be heard in discussion than it is in normal times. Sheer loudness of voice has a lot to do with the difficulty, but there is also a temperamental difference about confidence—about the amount of work that one thinks is needed to make one’s opinion worth hearing.”

What’s undeniable is the shift. Before the 1940s, only a few women in the English-speaking world had ever made careers in philosophy. In 1939, only two of Oxford’s women’s colleges even had a philosophy tutor. But the war years produced four of the most original writers on ethics of the second half of the twentieth century: Midgley, Elizabeth Anscombe, Philippa Foot, and Iris Murdoch.

They found their voices, perhaps, because suddenly no one was speaking over them. But Midgley’s second conjecture, about confidence, seems a more powerful explanation.

What builds confidence? The experience of being taken seriously by people one respects, certainly. And during their university years, Midgley and her peers had the full attention of their tutors. That might not have happened if they had come up in 1935 rather than in 1937, 1938, 1939. Until 1939, up-and-coming philosophers had a profile: educated at elite boys’ schools, masterfully proficient in Greek and Latin, quick-spoken and combative. Women didn’t fit the stereotype. When Anscombe—the most self-possessed and brilliant of the quartet—sought a recommendation from her post-graduate mentor, Ludwig Wittgenstein, he wrote that she was the most capable “female student” he had taught since 1930, and perhaps in the top ten overall. Others saw more quickly who she was. Gilbert Ryle, the acknowledged leader of the Oxford philosophy subfaculty, wrote that he and his colleagues were in awe of her. But even an impressed and attentive mentor like Wittgenstein needed time to recognize what was in front of him. It simply wasn’t what he was used to seeing.

Anscombe, Midgley, Foot, and Murdoch were all gripped by self-doubt at the start of their careers. In Anscombe’s first scholarly publication, “The Reality of the Past,” she belittles her work as “a weak copy” of Wittgenstein’s. It would be almost a decade before she would begin to speak for herself in print. It was outrage that finally made her self-forgetful. As a Catholic in anti-Catholic England, Anscombe had always had moral courage. She had no problem standing alone. It was only as a scholar that she doubted herself. But when Oxford, where she now taught, proposed to give former US President Harry Truman an honorary degree, Anscombe commenced a stream of publications, first denouncing Truman for his murder of the citizens of Hiroshima and Nagasaki (“Mr Truman’s Degree”), then denouncing her colleagues for refusing to take her objection seriously (“Does Oxford Moral Philosophy Corrupt Youth?”). Outrage finally led her too to in-depth reflections about human action—whereupon she promptly published her short monograph, Intention, which Donald Davidson called “the most important treatment of action since Aristotle.”

The other three were no less debilitatingly self-conscious, early on. Murdoch was as overawed by Anscombe as Anscombe was by Wittgenstein. Murdoch wrote to Foot in 1947 that she doubted her “reality as a thinker.” And she never fully overcame these doubts. Her best work, such as the essays collected in The Sovereignty of Good, was idiosyncratic, synthesizing and comparing contemporary French and British thought in ways that no one else in her milieu even attempted. Working so alone, Murdoch was especially vulnerable to losing faith in herself as a philosopher. After 1963, she turned chiefly to her fiction. She never stopped writing philosophy, but she also never silenced her inner critic. She lamented to Foot that her Gifford lectures were “senseless.” It is only in the past couple of decades that philosophers have begun to reckon with her significance.

Foot’s path to philosophical self-confidence was the most straightforward. She too adulated Anscombe and for a time wondered if she herself had anything worthwhile to contribute. But for the nearly two-and-a-half decades that they worked together at Somerville College, Oxford, Foot apprenticed herself to her older colleague. They met every weekday afternoon in the Somerville Senior Common Room, where Anscombe gave Foot an open-ended, advanced tutorial. After a decade of this, in 1957, Foot knew what she wanted to say. Foot’s career from that point is a testimony to the power of sustained mentorship, and of one woman’s capacity to empower another. Foot for her part became the best mentor of any of the four, doing for a generation of women and men, first at Oxford and then at UCLA, what Anscombe had done for her.

Midgley was perhaps the most self-possessed of her friends. But she was also the last to truly find her voice.

Like Murdoch, she had unconventional interests. Midgley saw that an adequate ethics had to connect seriously to biology and psychology. It is no good talking about the good life for humans without considering the kind of animals we are. But the scope of Midgley’s questions struck even her friends (Foot, for one) as unprofessional. It was painful and disorienting. “It is so difficult,” she wrote at the time, “to insist that a thing is interesting when one’s colleagues are bored with it.” Absent from the academy while she raised her three sons, though, Midgley had her family and colleagues in the sciences (and her fellow outsider, Murdoch) to support her belief in the value of her work. She published Beast and Man, the first of sixteen books, at age 59.

Her story—and not only hers—is a lesson in the difference it makes when someone listens, and when someone encourages someone else to speak.

Benjamin J. B. Lipscomb is Professor of Philosophy and Director of the Honors Program at Houghton College. He lives with his family in Fillmore, New York, when his teaching doesn't call him to London for a season.