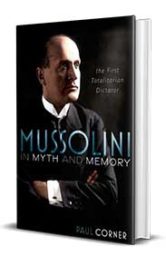 Mussolini in Myth and Memory

Despite subsequent legend, in military terms the March on Rome was a shambles. In the pouring rain, poorly armed and badly organized, the fascist blackshirts cut a sorry figure as they trooped, unopposed, through the streets of the Italian capital. But politically the March was a bomb-shell, the explosion of which resonated not only in Italy but throughout Europe. Certainly, in other countries armed and violent militias had sprouted in the confusion of post-First World War Europe, but none had succeeded in gaining power so dramatically. When the king—Vittorio Emanuele III—decided not to invoke the intervention of the army, he effectively capitulated to the mob and thereby ensured Mussolini’s success (and, 24 years later, the end of the monarchy in Italy).

Some historians have tended to downplay the importance of the March on Rome—”little more than choreography” according to some, and, of course, the absence of open battles gives weight to this point of view. However, the March should be seen in its full context. It was the crucial ratification of the fact that much of Italy had been out of the control of the authorities of the liberal state for many months. In many provinces of northern and central Italy, the fascists already exercised almost complete de facto control. As Italo Balbo, the leader of the fascists of Ferrara, boasted in early 1922, “The prefect does what I tell him.” In the hours preceding the March this position of strength was made evident with blackshirts occupying prefectures, police stations, post offices, telegraph offices, and railway stations throughout much of Italy. They faced little opposition. What the March really tells us is that the government of the liberal state—that is, the political system that had governed Italy since Unification—had abdicated power to an eversive movement, not because of a military confrontation, but because the enormous stress of the war had severely weakened the capacity of the state to withstand the challenge posed by the fascists. In a society radically changed by the experience of the war, the old politics of pre-1914 found itself lacking.

“The March was the crucial ratification of the fact that much of Italy had been out of the control of the authorities of the liberal state for many months.”

Not that the nature of the challenge was obvious to many. Fascists waved the national flag, sang patriotic songs, swore loyalty to the crown; many continued to wear their army uniforms. Creating disorder as they killed, maimed, and forced opponents (particularly socialist opponents) into exile, they claimed persistently to be the representatives of order. Inevitably police and regular army officers tended to be complicit with the creeping take-over of power that the fascists had affected from 1921 onwards. Who was going to shoot at ex-combattents with strings of medals pinned to their chests? Only a few, more far-sighted commentators, among them Antonio Gramsci, saw that Mussolini was moving towards dictatorship.

The March on Rome would become one of the great founding “myths” of the fascist movement, with a glorification which went far beyond its rather ramshackle reality. It was presented by fascist propaganda as the moment of the fascist “revolution,” the watershed between the old and the new politics, between the drab past of “little Italy” and the dazzling future of what was going to be a new great power on the European scene. Throughout the twenty years of the regime the March remained central to fascist mythology; it was the event that most expressed the fascist spirit, the event that sustained the legend of the heroic blackshirts saving Italy from the Bolshevik hordes. Its success constituted the legitimation of fascist violence. As a watershed between eras it was also used to distinguish between fascists; there were those who had belonged to the movement before the March, who merited particular respect and enjoyed appreciable privileges, and those who were post-March. Such was the prestige of the pre-Marchers that, by the mid-1930s, there was a lively market in false party cards dated to the months before October 1922.

Throughout Europe reaction to the March was, inevitably, mixed, with some appalled by the violence and the total disregard the fascists showed for parliamentary politics, while others—such as those among British conservative opinion—thought that the fascist government would bring much-needed “order” to what they condescendingly saw as typically Mediterranean chaos. Many right-wing European politicians looked on Mussolini and to his mode of achieving power with admiration. One man in particular was greatly impressed by the March on Rome and even hoped to emulate it. This was Adolf Hitler.

“The March on Rome would become one of the great founding “myths” of the fascist movement, with a glorification which went far beyond its rather ramshackle reality.”

Where are we now—a hundred years on? Certainly the bookshops are full of new books on the fascist seizure of power; interest (at least among publishers) is not lacking. But, at a broader level, within Italy, reactions seem muted. There is little sense that the March represented the begining of the tragedy that cost Italy more than half a million dead. It has become a historical event that remains, somehow, with few reverberations. This lack of reaction mirrors a wider phenomenon, which is the increasingly indulgent attitude evident in Italy towards the fascist regime and, in particular, towards its leader. It is apparent in such phrases as “Mussolini did many good things,” “Mussolini was not like Hitler,” or “Mussolini made one mistake” (referring to the alliance with Hitler). There has been, as one Italian historian has put it, a “defascistization of fascism” in popular memory—a tendency that draws sustenance from the way in which the regime continues to be seen by many through the lens created by the propaganda of the regime itself. Drained marshlands, trains on time, and (heavily organized) mass rallies trump violence, corruption, and war every time. And Mussolini seems to be regaining some of his undoubted charisma. The picture of fascism currently present in many quarters is often comforting, even nostalgic, rather than alarming. It evokes the virtues of the “strong man” and the “firm hand”—the apparent virtues of authoritarian government. Small wonder that, in the confusions and uncertainties of the contemporary world, these “virtues” are increasingly appealing.

Paul Corner is Emeritus Professor of European History and former Director of the Centre for the Study of Totalitarian Regimes at the University of Siena. He is the author of a number of books, including The Fascist Party and Popular Opinion in Mussolini's Italy (OUP, 2012) and Popular Opinion in Totalitarian Regimes: Fascism, Nazism, Communism (OUP, 2009).