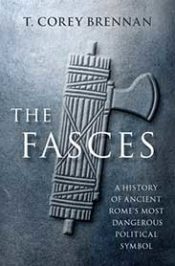 In November 1914, when Benito Mussolini, then prominent as a revolutionary socialist, tried to mobilize popular opinion for Italy to intervene in World War I, he gave the name “Autonomous Fasci of Revolutionary Action” to his disparate supporters. The term “fascio” (plural “fasci”) was then common in Italy’s political lexicon, in its core meaning of “bundle”, to denote a loosely-organized group grounded in a common ideology. It was the workers’ movement in Sicily of the mid-1890s that firmly cemented the word “fascio” into everyday use. At the time, the press even sometimes tagged members of the Sicilian fasci as “fascisti.”

Two decades later, especially after Italy entered the War in May 1915, there were dozens of activist groups of all stripes with “fascio’ in their name. Yet it was only after the conclusion of World War I that one of the political fasci used the old Roman symbol of the fasces—a bundle of wooden rods and a single-bladed axe with leather straps—to express its identity, and had its members proudly lay claim to the somewhat pejorative moniker “fascisti.” The take off point was Milan’s Piazza San Sepolcro on 23 March 1919, when Mussolini relaunched his war movement as a paramilitary group, the “Italian Fasci of Combat.”

The fasces in historical tradition

It is said that the charismatic “poet-soldier” Gabriele D’Annunzio (1863-1938) had urged Mussolini to adopt as the emblem of his new party the Roman fasces: in essence, a mobile kit for punishment, one intended to induce feelings of respect for the state’s highest authorities as well as fear. Ancient tradition is unanimous that the emblem had come from the Etruscans to archaic Rome, where 12 attendants known as “lictors” each carried these fasces in procession before the king, to mark his full civil and military power and with it, his capacity to inflict either corporal or capital punishment. What is certain is that the institution had a run of at least 1,800 years, through Rome’s Republican and Imperial periods, and then (in an attenuated form) to probably the end of the Byzantine empire.

“Use of the historical Roman emblem to a stunning degree helped valorize Mussolini’s violent methods.”

In sixteenth- and seventeenth-century Europe, authors and artists offered a new twist in the understanding of the fasces. We now find representations of the rods with axe regularly evoking memories not just of Roman rule, but also of a popular but decidedly non-pertinent Aesop fable featuring an old man, his quarrelsome sons, and a bundle of sticks. The point of the tale is that one can break rods easily one at a time, but not when bound together—a visual lesson of the power of unity. This learned conflation was responsible for promoting the emphatically non-Roman idea that the fasces represented unity, and good government in general, which later powerfully informed political iconography in both the young United States and revolutionary France.

The fasces as fascist iconography

Some months after San Sepolcro, we find Mussolini vigorously promoting the symbol of the fasces, first to brand his “Fascist Bloc” in the Italian general election of 16 November 1919. In late October his campaign proclaimed that “the Fascist emblem signifies unity, force and justice!”, and showed Roman fasces with cords loosened at the base of the bundle, evidently in the process of being readied for punitive use. Starting in 1920 the fasces adorned the membership cards of the movement—initially with loose cords, later without. Use of the historical Roman emblem to a stunning degree helped valorize Mussolini’s violent methods, which intensified especially from spring 1920. It also helped grow his movement. By the end of the next year, Mussolini’s group had swelled reportedly to more than 300,000 members and was reconstituted as the National Fascist Party (Partito Nazionale Fascista, or PNF).

After his movement’s largely bloodless “March on Rome” (28-30 October 1922) that felled the elected government, Mussolini—now as prime minister—set out immediately to force the fasces into every crevice of Italian daily life, from coinage and postage stamps to cigarette packaging. In the first half of 1923, the Fascist-led government tasked Italy’s most prominent archaeologist, Giacomo Boni (1859-1925), with divining the most “authentic” form of the Roman fasces—not so much out of genuine academic curiosity, but surely to set a single official form as the basis for a visual identity system. Amazingly, one fringe group of occultists sought to counter this effort by creating what they regarded as a spiritually supercharged fasces, topped allegedly by an Etruscan axe-head, which one of its members managed to present to Mussolini in Rome during the May 1923 International Woman Suffrage Congress. The ploy didn’t work, and Italy’s new nickel coinage with an antiquarian-derived Roman fasces went into mass production in summer 1923.

“Mussolini seems to have been the first statesperson ever to interpret the fasces as an instrument for imposing political unity by means of authority.”

All that proved to be just the first strides of a 20-year program to makes the fasces ubiquitous in Italy and the territories it colonized in Africa. Mussolini’s regime’s relentless focus on the fasces, and propagation of the image on a massive scale (with individual items ranging in size from lapel pins to entire structures, including Florence’s train station) had no close parallel in world history—not in the Roman empire, where we never find the frightening image of a free-standing fasces on a coin, nor even in the feverish production of French Revolutionary iconography. Plus, Mussolini seems to have been the first statesperson ever to interpret the fasces as an instrument for imposing political unity by means of authority. (Everyone else had it the other way around.) It also was a special innovation of Mussolini to idealize the humble lictor who lugged the fasces and raise him to prominence. The not so subtle suggestion here was that all elements of Italian society should model their behavior on that of the lictor, and selflessly and energetically carry forward the standard of fascismo.

Post-war legacy of the fasces

The defeat of the Axis powers in 1945 sent the image of the fasces sharply in retreat—even in the United States, where soon after war’s end it was dropped from the long-established (since 1916) ten cent piece. However, Italy developed no master plan to address its now-ubiquitous Fascist symbols. Indeed, by 1953, its national Olympic committee was touting Rome’s ex-Foro Mussolini as an ideal site for the 1960 Summer Games. And once it won its bid, it made only a belated and feeble effort (quickly abandoned) to mitigate the effect of the hundreds of fasces embedded in the mosaic walkway that led to the principal stadium, which are still intact today. That said, in the post-World War II era—with the exception of a provocative twinned public sculpture by Scotland’s Alexander Stoddart (2001) on university campuses in Paisley and Princeton—no one has been putting up new fasces in public art.

Almost “nothing”: why did the assassination of Archduke Franz Ferdinand lead to war?