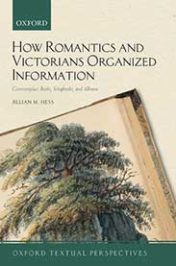 Where do we go to mourn the dead? A graveyard? A photograph album? A Facebook page? The very intangibility of death makes us yearn for a physical space to locate grief—a space we might return to. For many Victorians, mourning took place in notebooks. This was certainly the case for the future poet laureate, Alfred Tennyson, who, in 1833 learned that his closest friend, Arthur Henry Hallam, had died at age 22. In response, Tennyson began to write verses that, over the next seventeen years, would accumulate to become the great Victorian elegy, In Memoriam.

Tennyson recorded quotations and memories associated with Hallam in long, thin blank books that butchers traditionally used to account for profits and losses; accordingly, these manuscripts became known as the Butcher’s Books. Their structure mirrored the form of the poem developing inside of them. By writing in short quatrains, Tennyson could linger on the empty spaces left between thoughts—the divisions that create a stanza. And while poetry performs its own acts of cutting—by dividing language into literary forms—Tennyson emphasized carving as a theme. The Butcher’s Books highlight how cutting (stanzas, for example), despite its violent connotations, proved to be generative: the butcher disassembles a carcass and transforms it into nourishment. Likewise, Tennyson arranged worn-out commonplaces to form a spiritually recuperative poem.

Luckily for us, the University of Cambridge has digitized the Butcher’s Book in their possession (the other is at the Tennyson Research Centre in Lincoln): readers can view the manuscript here. The Wren Library at Trinity College, Cambridge, is a fitting home for this manuscript because it is where Tennyson and Hallam met as students. Even as Tennyson was composing In Memoriam, friends asked if they could donate loose pages to the college: Edward Fitzgerald wrote to Tennyson asking, “…if you have any objection to my giving two or three of the leaves of your old Butcher’s Book (do you remember?) to the Library at Trinity College?” (4 December 1864, Letters, E.F. 2:535).

Friends like Fitzgerald understood the immense value of access to the poet’s manuscripts. The same impulse motivates the remainder of this post, which serves as a guide through several fascinating aspects of the Trinity College manuscript.

8v & 9r: One of the first pages in this manuscript contains a detailed sketch of a man crying, perhaps evoking the emotional tenor of the following pages. More pointedly, the sketch recalls descriptions of Tennyson reading from this notebook as tears streamed down his face. Aubrey De Vere described one such reading in April 1845: “he read many of the poems to me….till the early hours of the morning. The tears often ran down his face as he read…They were written in a long and narrow manuscript book, which assisted him to arrange the poems in due order by bringing many of them at once before his eye” (Memoir I. 293). On the recto (the right page), we can observe the space between In Memoriam’s stanzas, illustrating De Vere’s point.

The reader might also notice that the top section of the verso (the left page) has been cut out. There are, in fact, many such cuttings throughout the manuscript, which adds another suggestive layer to the butcher-theme. Sections of this notebook were cut out for several reasons: to give to friends or (shockingly) to be used to light pipes. Fitzgerald describes “the Butcher’s Book, after its margins serving for Pipe-lights, went Leaf by Leaf into the Fire.”

45v & 46r: Many of the cuttings also excise comments made in pencil by James Spedding, another friend from Cambridge. Consider Spedding’s comments on what would become Canto 57. Spedding writes: “It seems to me that the 3rd stanza is not wanted and w[oul]d be better cut. The second does not please me…” Spedding ends his note with encouragement: “With this exception I think it beautiful.” Tennyson took Spedding’s advice and cut the second and third stanzas for the final version of In Memoriam. This page is also fascinating because of how Tennyson alters his handwriting as he evokes Catullus’s classic elegiac line, “Ave, Ave, Ave.” (A few pages earlier, Tennyson imitates medieval script while mocking worn out commonplaces of mourning (44r).) Tennyson supposedly considered ending the poem here with “and ‘Ave, Ave, Ave’ said, / ‘Adieu, Adieu’ for evermore.” But he chose to conclude on a happier note—with a wedding. Let’s do the same.

1r: The Trinity Butcher’s Book does not include what would become the “Epilogue” that describes the marriage of Tennyson’s sister in 1842. So, for a happier conclusion, we’ll return to the beginning of the manuscript, with Tennyson’s inscription on the “Anniversary of Hallam’s Wedding day” in 1886, when Tennyson gifted the manuscript to Lady Simeon.

Clearly, Tennyson shared his In Memoriam drafts with a close circle of friends. Accordingly, one answer to the title of this post (“How did Tennyson write In Memoriam?”) is simply that he wrote it among friends.

Jillian M. Hess is Associate Professor of English at Bronx Community College, CUNY. She writes the newsletter, "Noted," which gathers tips and tricks from the world's best note-takers.

Hess is the author of How Romantics and Victorians Organized Information: Commonplace Books, Scrapbooks, and Albums (Oxford 2022), part of the Oxford Textual Perspectives series.