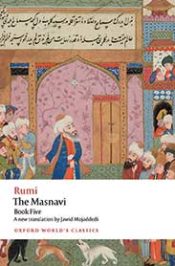 Rumi, the thirteenth-century Muslim poet, has become a household name in the last few decades, even becoming the best-selling poet in North America thanks to translations of his work into English. Verses of his poetry are used to begin yoga sessions, religious ceremonies, and weddings, and are ubiquitous throughout social media, in addition to actual sales of his books. His universalist perspective means that his poetry is quoted by practitioners in various traditions but with little Persian Sufi poetry readily available to compare it with, Rumi’s approach as a poet is completely unknown to most readers. This is a great pity since he was a subversive innovator.

Two things make Rumi’s lyrical poetry stand out. First is the deliberately childlike language used in many of his poems, including “Yar mara”⁠—meaning “I have a beloved”⁠—a much-performed poem in which “you are” is repeated 29 times in just eight couplets. And second, the breaking of the limits of genres: among his lyrical poems are mystical exegeses of the Qur’an and a famous homily on the Hajj pilgrimage with the refrain “O pilgrims on the Hajj, where have you gone? The Beloved is right here—come back!” Rebelliousness in the message should come as no surprise for a poet who innovates subversively with the form of his poems in a tradition of writing where strictly following the refined conventions of love poetry was expected.

Rumi’s magnum opus is The Masnavi (literally, “The Rhyming Couplets”). This poem is so revered in the Muslim world that it is commonly referred to as “The Qur’an in Persian.” The Masnavi is also probably the longest single-authored mystical poem ever written in any civilization at approximately 26,000 verses across its six volumes. It contains the highest frequency by far of citations from the Qur’an among poems in the masnavi form, but its sources are wide-ranging, including religious scriptures, folklore, and works on astronomy and medicine.

Similar to his lyrical poetry, Rumi’s Masnavi is predictably subversive. It does not begin with the standard religious phrase used to start all other Muslim books (“In the Name of God…”), and instead presents 18 verses that begin and end with the same letters as that phrase begins and ends with, the Arabic alphabet’s equivalent of “b” and “m”. The poem also contains numerous lyrical passages traditionally excluded from the didactic masnavi form in which the poet does not normally refer to himself directly. Rumi breaks off from his narratives and homilies in this poem at will, explaining that he demands his readers’ immediate attention and does not want them to anticipate how plots might end.

“Of all Persian poets, it should be no surprise that Rumi should be the one trying something new and controversial.”

The most notorious of all Rumi’s poetic innovations is his inclusion of sexually explicit stories alongside the exegesis of scripture and stories about prophets. These stories are extraordinary in their own genre because, while other masnavi poems have stories about sexual encounters, Rumi provides all the crude details about genitals and bodily fluids. Book Five of The Masnavi includes most of these passages. The most talked about of the stories is probably the one about the mistress of a house who discovers that her maid has secretly been having sex with her donkey. Her reaction is to send the maidservant on an errand so she can secretly try the donkey herself. Not having learnt from the latter the need to use a contraption to prevent full penetration, the encounter ultimately kills her. Other more straightforward sexually explicit stories tend to be about fornication, with one comical example depicting a religious shaikh as standing up and performing the Muslim ritual prayer when interrupted from sex with his maidservant by his own wife.

Most commentators on Rumi’s sexually explicit stories have bashfully avoided discussing them. In the context of Book Five of The Masnavi, it is not too difficult to see that they warn about hidden corruption, similar to many stories in that volume that are not sexual in content. But the real mystery for most people is why Rumi should have used this kind of content at all. Of all Persian poets, it should be no surprise that Rumi should be the one trying something new and controversial. Moreover, when one observes his poetic innovations closely, one comes to the conclusion that they consistently serve to amplify the effect of his words.

Not satisfied with refinement of expression, Rumi was a poet who sought to shake his audience into action, hence his interactive involvement in his poems against all conventions, the often-childlike level of language, and heavy repetition. There is nothing more shocking than sexually explicit content—and also nothing as memorable. Moreover, the degree of shame involved in having one’s sexual activity exposed in crude detail serves as the most powerful warning of all against nurturing hidden corruptions rather than enduring the process of full purification on the Sufi path. Rumi was a master of keeping his audience engaged and receptive to the transformation his teachings could bring about inside them. For him, the ends justified the means, regardless of the rules, conventions, and taboos that they might break.

Jawid Mojaddedi is Professor of Religion at Rutgers University.

Born in Afghanistan, he was a 2014-15 National Endowment for the Arts Literature Translation Fellow and a 2020-21 National Endowment for the Humanities Fellow. Dr Mojaddedi's translation of The Masnavi, Book One (OUP, 2004) was awarded the Lois Roth Prize by the American Institute of Iranian Studies. He is the editor and translator of The Masnavi, Book Five (OUP, 2022).

Why was Jerusalem important to the first Muslims?