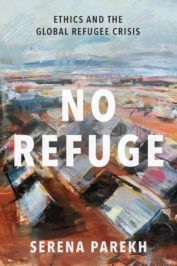 The outpouring of support for Afghan refugees since the fall of the Taliban a few weeks ago is laudable. As the author of two books on our obligations to refugees, many people have been asking me about how we should respond to this crisis and what we can hope for Afghan refugees. There’s both a lot we in the United States can do and a lot we should be worried about. Let me explain.

What can we do? The most obvious way to help is by resettling refugees—this refers to the process of vetting refugees, transporting them to the US, providing them with a legal status that allows them to work and receive benefits when necessary and connects them with some of the many volunteer-run NGOs and aid organizations that will help them settle into their new lives in the US. With this current outpouring of support that is based in the realization of the moral responsibility that the US has to Afghans, especially those connected to helping US service people, there is more support than ever for robust resettlement of Afghan refugees into the US.

Though there is promise and potential to help Afghan refugees, there is also much to worry about. Take resettlement. Though it represents the best hope for many, it is highly unlikely that we will resettle nearly enough refugees to make a significant difference. A quick glance at the numbers in the wealthiest countries makes this clear: Canada and the UK have promised to take in 20,000 refugees, Australia 3,000, and the US is aiming to resettle 65,000 refugees this year. Though this level of resettlement is significant, it is a drop in the bucket compared to the hundreds of thousands of people fleeing Afghanistan and the millions of Afghans who left before the Taliban take over. Many of those displaced won’t even be recognized as legitimate refugees who might be entitled to resettlement. Other countries, like Austria and Switzerland, have made it clear that they will not take in any refugees, and it’s possible other EU countries will follow.

If history is any indication, a likely outcome is that once attention turns away from Afghanistan and towards domestic challenges or other global crises, Afghan refugees will likely find themselves lingering in one of a few “temporary” settings. They may find themselves in refugee camps run by the UN near Afghanistan. Iran, for example, currently hosting 3.5 million Afghans, has set up tents near the border but has made it clear that they plan to repatriate Afghans “once conditions improve.” Though refugee camps were always intended to be temporary, refugees are likely to remain there for years, possibly decades, with no real sense of what permanent, durable solutions for them might be.

Another option is moving to urban or peri-urban places without the direct help of the international community. Some Afghans may choose to make their way to cities in Pakistan, for example, where they may have relatives and feel like they could make a living working informally. Many refugees in situations like this feel that they are able to preserve their autonomy and remain, to some extent, in control of their lives. But the disadvantages are dire: work will be precarious and often not enough to sustain them; housing undependable and inadequate; and they will have to live with profound physical insecurity in their day to day lives. Like refugees living in camps, they will have to endure the uncertainty of living in the limbo of not being able to return to their homes and not being allowed to settle permanently elsewhere. Both groups will struggle to meet their basic needs.

Still others will reject both options and choose instead to go directly to a country where they believe they will have a chance to start over. They know that if they get to Italy or Greece, for example, they can make their way inland and claim asylum in a country that will hopefully recognize them as legitimate refugees and allow them to resettle legally and eventually bring over their families. This is precisely what many countries in the European Union are afraid of.  Emanual Macron, the President of France, was clear about this when he said shortly after the fall of Kabul that Europe must “protect itself from significant waves of illegal migrants.”

None of these options for the many refugees who are not resettled are adequate. Most people will easily recognize this. What is often ignored is the fact that insofar as the US and its allies are largely responsible for the situation that caused the refugees to flee, we are also responsible for these refugees who find themselves living in these limbo states for years on end, suffering profound material and physical insecurity. This responsibility is not lessened by the fact that we are resettling some refugees. The US and its allies created the situation that Afghans now find themselves in: the invasion of Afghanistan, the failure to put in place a non-corrupt government that Afghans genuinely trusted and believed in, and the failure to withdraw in a way that allowed for stability. Even if you believe that the US was acting with good intentions and trying to do something positive, we remain responsible for the outcome and the refugees who now realize that their home country is no longer a safe place for them to live and who are unlikely to find a new country to call home.

What can be done? This is always the most challenging question. We need to be open to resettling many more refugees that we’re used to and adequately fund the organizations that help to integrate and support refugees. We need to also work with the international community to resettle large numbers of refugees elsewhere, in countries that have the resources to resettle refugees but haven’t traditionally done so. We need to work with governments in the region to encourage and support them in integrating refugees by allowing them, for example, to work, and not isolating them in camps where they can’t meet their basic needs or neglecting them entirely as they struggle to survive in urban centers. For those refugees determined to make their way to Europe and elsewhere, they need safe routes, humanitarian visas, and other programs that don’t force people risk their lives in order to claim asylum.

This is a tall order, but it seems that for many in the US and around the world, the events that we’re seeing unfold make clear that we have a moral obligation to Afghan refugees that goes very deep.

When the headlines become less dramatic and other events capture our attention, it’s crucial to remember that Afghan refugees will need help for a long time to come. That we can help is the good news. That we’re unlikely to help in the ways that Afghan and other refugees genuinely need us to is what we should be worried about.

Serena Parekh is an Associate Professor of Philosophy at Northeastern University in Boston, where she directs the Politics, Philosophy, and Economics Program (PPE). Her primary philosophical interests are in social and political philosophy, feminist theory, and continental philosophy. Her most recent book, Refugees and the Ethics of Forced Displacement, was published with Routledge in 2017. Her first book, Hannah Arendt and the Challenge of Modernity: A Phenomenology of Human Rights (Routledge), was published in 2008 and translated into Chinese. She has also published numerous articles on social and political philosophy in Hypatia, Philosophy and Social Criticism, and Human Rights Quarterly.